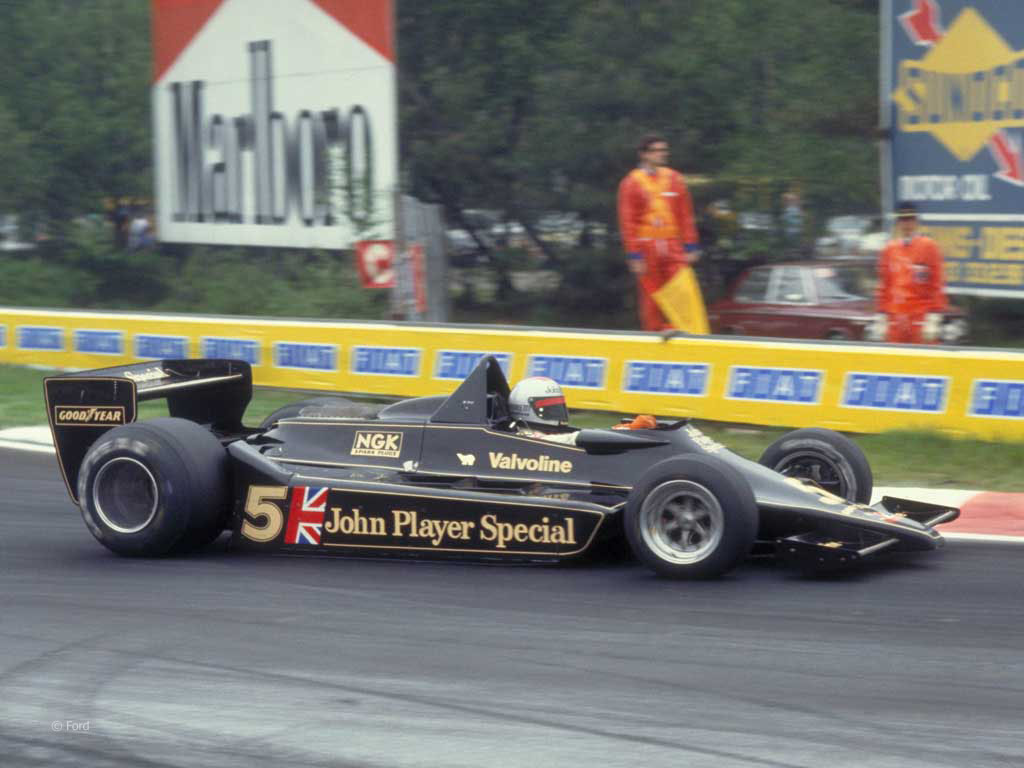 The last in this series looking at F1 technologies that were banned looks at one innovation that the governing body were surely right to get rid of.

Indeed, had they stepped in more quickly to rid the sport of ground effect cars, a series of terrifying crashes might have been avoided.

Ground effects was another innovation brought to F1 by Colin Chapman’s Lotus team. It was borne of an idea of making the entire car function as one giant wing to increase downforce.

It was also one of the first developments to be discovered using a wind tunnel. The team observed that when the outer edges of the car’s sidepods reached the floor it generated a massive increase in downforce. It created a low pressure area beneath the car, sucking it down.

Applying that theoretical observation to the track proved difficult. The Lotus 78 (a.k.a. the John Player Special Mark III) of 1977 was the first car to attempt it and did boast substantially better grip than its predecessor. But poor reliability ruined the team’s season.

The team continued into 1978 with a modified version of the 78 but really hit its stride when it brought the 79 out for its first race. At Zolder, the sixth round of the season, drivers Mario Andretti and Ronnie Peterson destroyed the opposition, finishing first and second by a comfortable margin. They repeated the feat next time out in Jarama, Spain.

A focus on tidying up the aerodynamics of the car made the 79 a leap forward over its predecessor and every other car in the field. The rear bodywork was all-enveloping and the front and rear suspension was brought within it to keep the airflow as smooth as possible.

Chapman used every trick to keep the back of the car as neat as possible – even lobbying for a change in the rules that allowed the car to have a single fuel tank. This allowed him to move the cockpit forward, insert the fuel tank between the driver and the engine, and tidy up the rear of the car accordingly.

Lotus won eight of the season’s 16 races – total dominance by 1978 standards. But their double title win was, as so often in Lotus’s history, marred by tragedy. Ronnie Peterson died of complications following in accident at the start of the Italian Grand Prix, where Andretti became drivers’ champion.

The team also lost the plot on design. Chapman targeted an aggressive development of the ground effects concept for the 1979 car, the Lotus 80. But rival constructors Ligier and Williams beat him by allying the ground effects to a more rigid chassis structure.

Lotus won nothing in 1979 – but ground effects continued to dominate. And the gigantic cornering speeds they created saw lap times tumble. Alan Jones’ pole position time for the British Grand Prix at Silverstone of 1’11.880 (236.324kph / 146.845 mph) was 6.61s quicker than James Hunt’s of two year’s previously.

By 1980 escalating cornering speeds was becoming a real concern. It was the focal point of a furious dispute between the governing body FISA, typically supported by the manufacturer teams Ferrari, Renault and Alfa Romeo, and the constructors’ association FOCA, led by Brabham boss Bernie Ecclestone.

Simply put, FISA wanted to ban ground effects because of the dangerously high cornering speeds they allowed, and the fact that if one of the ‘skirts’ broke it could send a car off the track at massive speed with no warning for the driver.

FOCA resisted – its teams largely used Cosworth engines that were less powerful than those of the richer manufacturers, and more effective chassis design using ground effects provided them with a means of levelling the playing field.

A series of accidents escalating in severity put pressure on FISA President Jean-Marie Balestre to act. In testing for the German Grand Prix Alfa Romeo driver Patrick Depailler was killed when his car speared straight on at the high speed Ostkurve.

His death was blamed in part on the fact that the safety fencing on the corner had not been erected. But the massive cornering speed of his ground effect car was a contributory factor.

The following season brought a controversial ban on skirts. But designers quickly found a gaping hole in the regulations: The undersides of the cars were only required to be flat when the car was in the pits.

Brabham’s Gordon Murray was first to cotton on to this and he produced an ingenious solution for his BT49 which automatically lowered the skirts while the car was on the track. With that advantage Nelson Piquet destroyed the opposition in the Argentinian Grand Prix.

Teams began copying the system – albeit using a crude lever operated by the driver instead of Murray’s complex hydraulics – and soon every car in the field was legal in the pits but illegal as they lapped the circuit.

FISA gave up the fight and re-legalised skirts for 1982. The consequences were dire.

Disaster and near misses

By now many of the leading teams were using turbo engines which required substantially more fuel than before. Thus drivers were perched at the front of explosively powerful turbo cars that cornered so quickly they could barely see.

This much was obvious at the second race of the year in Brazil when the winner, Nelson Piquet, collapsed on the podium from the exertion of manhandling his Brabham BT49D around the fast circuit in scorching Rio de Janeiro heat. His team mate Riccardo Patrese retired after losing his bearings and almost collapsing at the wheel.

Much worse was to follow. In qualifying for the Belgian Grand Prix Gilles Villeneuve tagged the back of Jochen Mass’s March and Villeneuve’s Ferrari was launched into the air. It hit the ground nose-first with such force that it likely killed Villeneuve instantly. The Ferrari disintegrated and threw its driver across the track.

The accident horrified the sport but, like Depailler’s death, it was immediately blamed on another mitigating factor – qualifying tyres. Villeneuve had previously complained about the dangers of trying to post a quick qualifying lap under high pressure on tyres that only provided grip for a lap or so. And those were exactly the circumstances in which he was killed.

With the benefit of hindsight it is fair to say that, although the pressures of qualifying played a role in Villeneuve’s death – as did his fall-out with team mate Didier Pironi, the vicious nature of the ground effect cars had a hand in it too.

Two months later at the Dutch Grand Prix the suspension on Rene Arnoux’s Renault collapsed under the enormous pressure generated by ground effects. He ploughed into the tyre barrier at Tarzan corner, mercifully stopping short of the crowd.

An even luckier escaped followed later in July. During the French Grand Prix at Paul Ricard Mauro Baldi’s Arrows and Mass’s car tangled, firing Mass’s burning car into the spectator enclosure. In that terrifying moment pure fortune alone spared Formula 1 from suffering its own equivalent of the 1955 Le Mans disaster – no one was killed.

But at the German Grand Prix in August Pironi was not so lucky. Much has been written about his state of mind going into that race, and many have speculated why he was even bothering to lap the Hockenheimring in the pouring rain in qualifying when he already had pole position.

In thick spray he drove straight into the back of Alain Prost’s Renault at undiminished speed. His Ferrari arched into the air and ploughed its nose into the ground. Pironi survived, but his legs were terribly broken in many places, and he never raced an F1 car again.

However great the role of ground effects had been, the catalogue of traumas prompted FISA to act, and flat bottomed cars were made mandatory for 1983. Ground effects were gone.

Lessons had been learned from beyond Formula 1 too. In America the Indy Car series had begun using ground effect cars. In practice for the Indianapolis 500 Gordon Smiley was killed in a crash of appalling violence, hitting a concrete wall nose-first. The impact was so great his crash helmet was wrenched from his head with the chin strap still fastened.

Perhaps it would be possible for modern single seater racing cars to employ full ground effect trim – but modern safety standards would demand enormous compromises if they were left unrestricted.

Enormous run-off areas would put spectators a long way from the action, street racing would be out of the question, and drivers would need the kind of gravity suits used by fighter pilots.

It’s not hard to reach the conclusion that ground effects had to be banned.