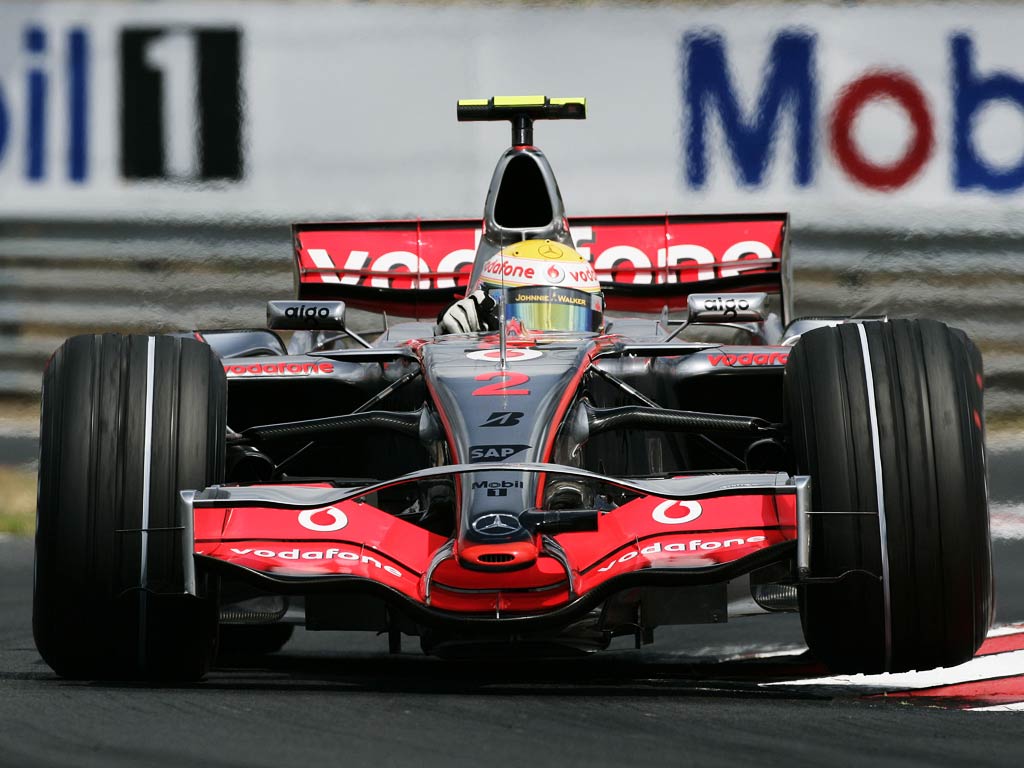 As if McLaren didn’t have enough problems off the track – now one of their drivers has employed some extraordinarily unsavoury tactics against the other.

Fernando Alonso deliberately delayed Lewis Hamilton in the pit box to prevent his team mate from setting his final lap.

The Spaniard then took pole position off his team mate. But will there be repercussions?

The weather at the Hungaroring was predictably hot, but strong winds threatened to blow drivers off-course.

The main interest in the first part of qualifying was how the new rivals would fare against their team mates.

Over at Toro Rosso, Vitantonio Liuzzi’s first effort was a 1’23.576, and when Sebastian Vettel ran wide at turn 11, it looked like Liuzzi had the advantage. But Vettel still beat Liuzzi by three-tenths – 1’23.218. What would Scott Speed have made of that?

The fastest drivers were in a different league. Lewis Hamilton’s fastest lap was the best of the weekend so far – 1’19.570.

Yamamoto improved on his final lap to 1’23.774 – but was clearly delayed by Giancarlo Fisichella’s Renault for most of the lap.

That was bad news for Vettel too, who ran wide at turn 11 again and despite improving to 1’22.177 was out of qualifying.

Interestingly, Heikki Kovalainen ended the session second fastest – but he was a full seven tenths of a second slower than Hamilton, most of which came in the middle sector.

Both Williams made it through to the second part of qualifying – Alexander Wurz having struggled with it earlier in the year – and so did Anthony Davidson at the circuit where he made his F1 d?âăĆ?é?®but five years ago.

The track looked much quicker in the second session – Jarno Trulli’s first lap was four tenths slower than Hamilton’s in the first session. When Hamilton came out he went quickest again – 1’19.301.

Ferrari seemed to be struggling, however. Kimi Raikkonen’s first lap was eight tenths off Hamilton’s, and Felipe Massa oversteered wide in turn three and set a 1’21.021 that left him 11th.

He would need to do another lap to get into the vital top ten. But he suffered some kind of mechanical problem in the pits and had to be dragged back into his garage briefly.

But when he returned to the track he failed to improve on his time and failed to make the top ten. He wasn’t the only driver who failed to improve. Davidson, 15th was a tenth off his earlier time. And Liuzzi, 16th, set a 1’21.9 that would have left him 18th in the first session.

Robert Kubica escaped being knocked out with the last lap of the session, beating David Coulthard by 0.015s.

As ever the McLarens led the survivors out for the final part of qualifying – Hamilton and Fernando Alonso ahead of the sole Ferrari of Raikkonen. They were joined by the Toyotas and BMWs, plus Fisichella, Mark Webber and Nico Rosberg.

The McLaren shot off but Alonso had a brief off at turn ten and after that seemed content to drive to slow down Raikkonen. The Finn had a look at passing the McLaren at turn 11 but failed, locking a wheel briefly, though he did later get past.

Alonso sat in his pit box for a long time before setting out on his lap. Despite the long hold as he set off the team noticed a tyre warmer cover caught around the front right wheel – the same corner that caused Hamilton problems at the Nurburgring.

Jarno Trulli set a 1’21.796 to go fastest on harder tyres. Raikkonen on the softer rubber posted a 1’20.930. But that was beaten by Nick Heidfeld by eight thousandths of a second.

But the McLarens were flying. Alonso went quickest on the harder tyres with a 1’20.133 but Hamilton, on the softer compound, cut four tenths of a second from that with a 1’19.781. Alonso was fastest in the final sector, Hamilton in the other two.

The battle now was all about the McLarens – and it looked as though Alonso was using some dubious tactics to delay his team mate. He seemed to wait in his pit box for an unusually long time while Hamilton waited behind him.

The Briton did not manage to get out on track to set another lap but Alonso did – and his 1’19.674 took pole position.

But just when McLaren didn’t need it their world champion driver has put the team in disrepute once again.