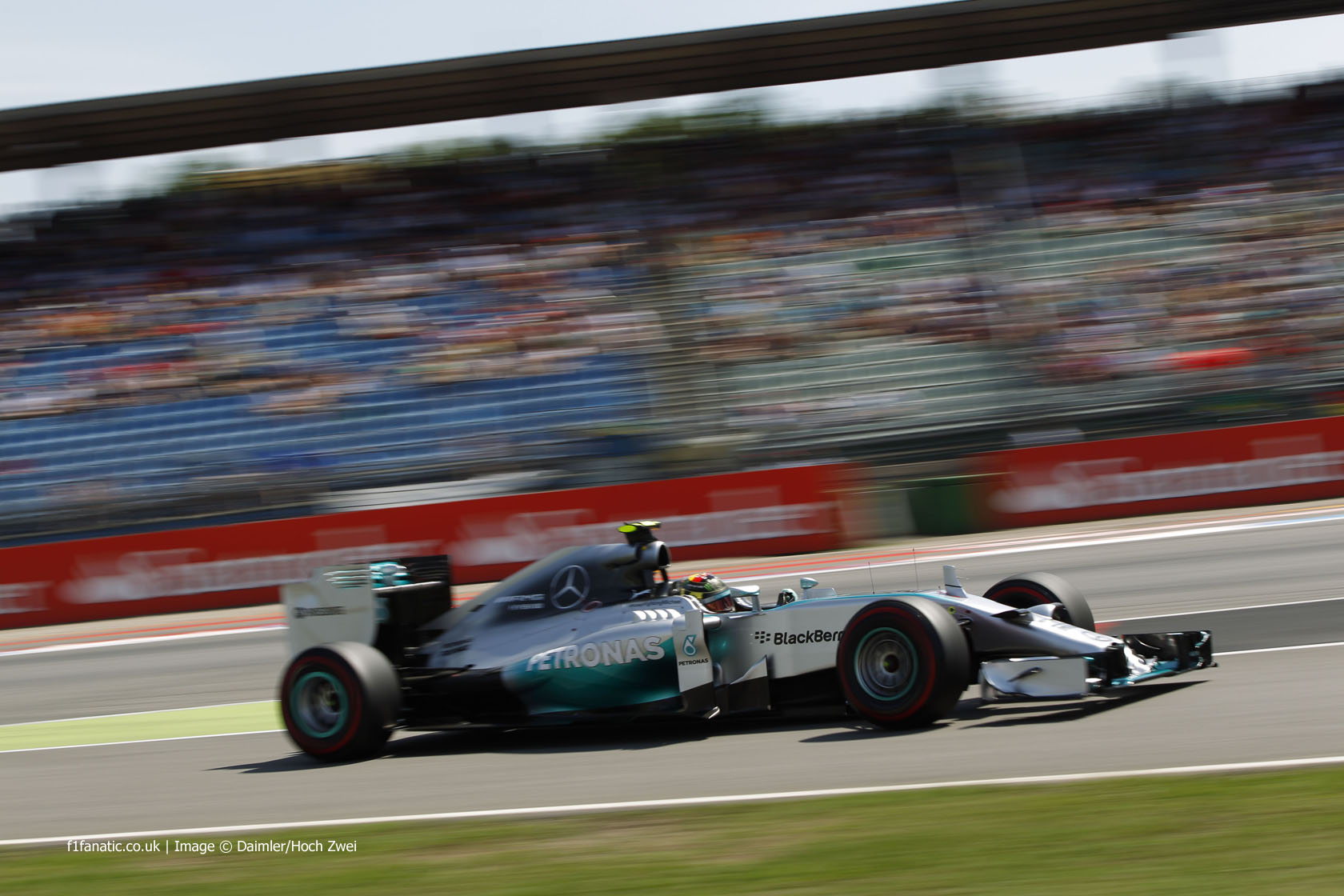 Nico Rosberg has led from start to finish at today’s German Grand Prix to claim his first home race win and his fourth victory of the season after a frantic race filled with action and overtaking.

Rosberg’s team mate and rival Lewis Hamilton fought a hard race-long battle to recover to third place, meaning the gap between the two championship contenders has widened to 14 points. Valtteri Bottas took the second step on the podium for the second consecutive race after holding off Hamilton’s Mercedes under intense pressure in the closing laps.

At the start, Rosberg leapt out into the lead with Bottas slotting into second behind. But Felipe Massa was clipped at the apex of Turn One by Kevin Magnussen’s McLaren, pitching the Williams upside down in a violent accident. Thankfully, the Brazilian climbed out of the car unhurt, but the Williams driver was forced out for the third time this season.

The Safety Car was immediately deployed and the race resumed on Lap Three with Rosberg leading from Bottas and Sebastian Vettel in third while Hamilton immediately passed Max Chilton for 16th to begin his fightback through the field. The Stewards announced that there would be no action taken regarding the first corner accident.

Daniil Kvyat tried an aggressive move around the outside of Sergio Perez into Turn Eight over ninth place, but appeared to squeeze the Force India at the apex and the two made contact, sending the Toro Rosso into a spin and dropping the Russian rookie well down the field.

Most of the early action was focussed on the run down to the hairpin. Lewis Hamilton followed Daniel Ricciardo past Adrian Sutil’s Sauber, but the German appeared to fail to see the Mercedes following through behind the Red Bull and the two made minor contact at the apex.

Soon, there was a train of cars behind Perez with Raikkonen, Ricciardo and Hamilton all scrapping over the same piece of tarmac. Hamilton used the double boost of slipstream and DRS to dive past both the Ferrari and the Red Bull into the hairpin, but clipped the Ferrari’s front wing in the process. Hamilton then dispatched Perez one lap later.

On Lap 15, Raikkonen found himself sandwiched between two cars again, with Fernando Alonso and Sebastian Vettel diving either side of him into the hairpin – the Finn getting clipped by the Red Bull to lose another piece of his front wing for his troubles.

Rosberg pitted at the end of Lap 15, rejoining in the lead. Hamilton, on the more durable Soft tyres, was able to to climb up to third behind his championship rival and Bottas’s Williams before pitting for another set of Soft tyres at the end of Lap 26, resuming in eighth position.

Nico Hulkenberg’s fifth place appeared to be under threat with frantic team radio messages illustrating that the Force India was suffering from some kind of software issues.

On Lap 29, Hamilton successfully passed Ricciardo for seventh with well-executed switchback move exiting the hairpin. The following lap, the Mercedes cruised up behind Jenson Button but Hamilton appeared to be caught out when the McLaren ran wide at the apex and made gentle contact with his former team mate, causing damage to his front wing. Hamilton later passed the McLaren along the back straight on Lap 31, appearing to hold his hand up in apology, before relieving Hulkenberg of fifth two laps later.

At the half distance mark, Rosberg was still comfortably in the lead with Bottas still in second but unable to challenge. Fernando Alonso and Sebastian Vettel found themselves nose to tail for the second race in succession and both breezed past Hulkenberg for fourth and fifth during their 38th tour of the circuit.

Rosberg and Bottas were soon in for their second stops of the afternoon, but Hamilton pitted for Super-Soft tyres on Lap 43, resuming in fifth and immediately picking up the pace, suggesting that he was the only one of the front runners who had switched to an aggressive three-stop strategy.

Danill Kvyat’s day ended in spectacular and frightening fashion when his Renault engine burst into flames along the long back straight. The rookie was able to pull over and quickly get out of the car as fire extinguishers were quickly on the scene.

Suddenly, Adrian Sutil spun at the last corner and stalled, leaving his Sauber stranded in the middle of the track on the starting grid. With marshalls seemingly unable to reach the stricken car safely, it seemed as though a Safety Car intervention was imminent and Hamilton immediately pitted for his second set of Super-Soft tyres, leaving him with a 16-lap final stint. But Race Director Charlie Whiting chose not to deploy the Safety Car and the Sauber was eventually recovered by the marshalls who were forced to run across the circuit.

Despite having a number of laps to complete on the Super Soft tyres, Hamilton went straight back on the offensive, catching and passing Fernando Alonso and dispatching Vettel soon afterwards before eating into the gap ahead to Bottas’s second placed Williams.

Daniel Ricciardo caught and passed Alonso for fifth, but the Ferrari driver refused to give up the position easily and immediately put pressure back on the Red Bull, eventually reclaiming the position after a superb multiple-lap battle with the Australian.

With just over five laps remaining, Hamilton was now tucked right behind the Williams. But despite the Mercedes’ obvious pace advantage, Hamilton appeared unable to dispatch the Finn as easily as those before him, complaining over team radio that the Williams was just too fast in a straight line.

But out front, Rosberg cruised through the final laps to take the chequered flag and his fourth win of the season to the delight of the Hockenheim crowd. Despite having chased down the Williams, Hamilton failed to snatch second place from Bottas who recorded his third podium in a row and second consecutive second place finish.

Sebastian Vettel claimed fourth, while Alonso took fifth after a superb effort to hold off Ricciardo by less than a single tenth of a second at the line. Nico Hulkenberg brought his Force India home in seventh, followed by the two McLarens of Button and Magnussen. Sergio Perez rounded out the points in tenth.