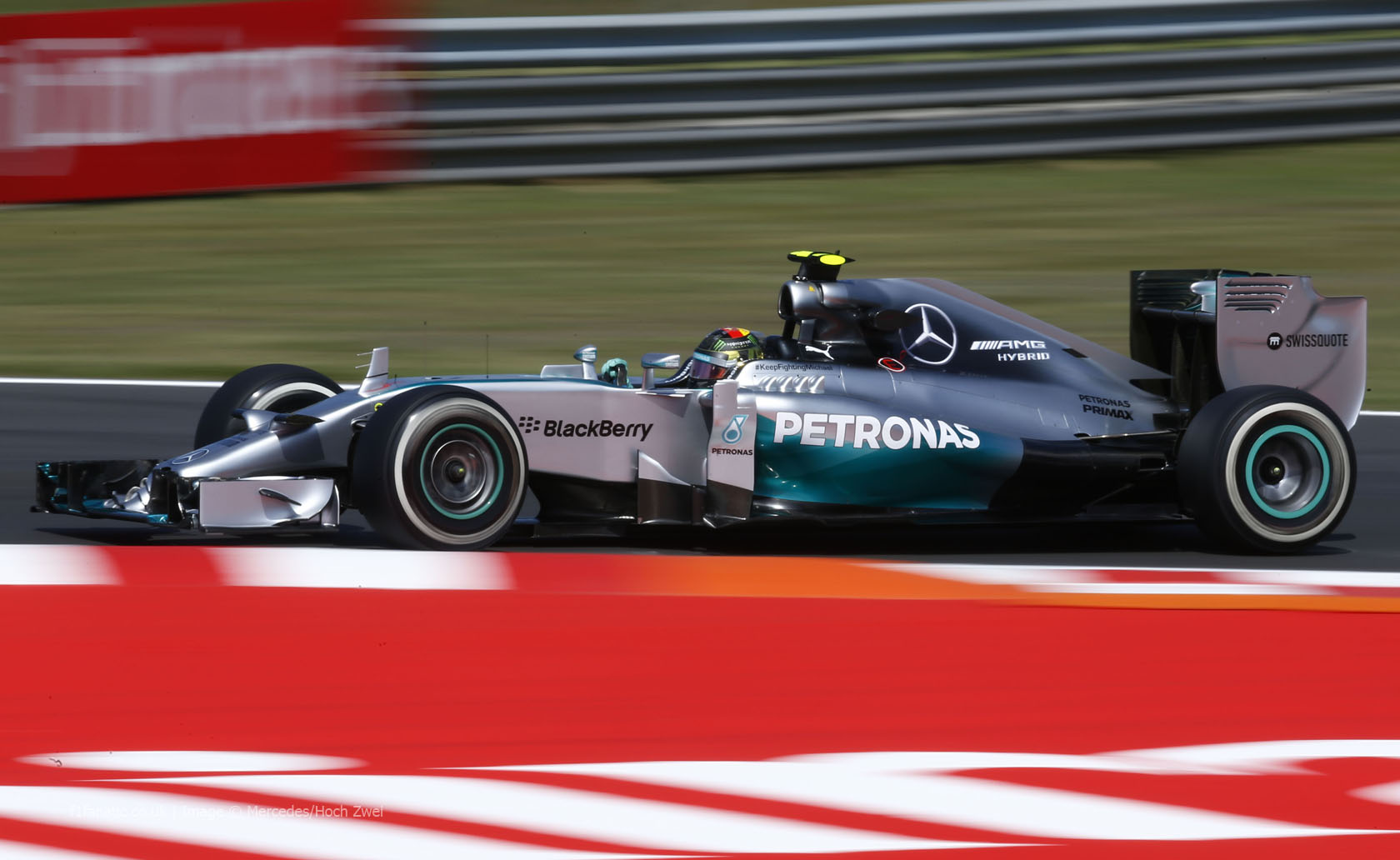 Nico Rosberg secured his third successive pole position at Hungary after Lewis Hamilton failed to set a single timed lap due to a fiery engine failure in Q1.

Sebastian Vettel will line up alongside the championship leader on the front row, with Valtteri Bottas and Daniel Ricciardo behind them on the second row of the grid.

Qualifying began with a dry track, but with the threat of rain hanging in the air as thick dark clouds gathered overhead.

Pastor Maldonado was the first car on circuit, but almost immediately there were problems with the Lotus which slowed to a crawl exiting Turn 15 and was forced off the circuit just before the entry to pit lane.

But then, there was even greater drama as Lewis Hamilton’s Mercedes was suddenly ablaze. With flames shooting out of the rear of the car, Hamilton was forced to stop in the entrance to pit lane, his session over just as soon as it had begun.

With his championship rival doomed to a back row start, Nico Rosberg set the fastest time of the session, a 1’25.227 on the Medium tyres. Jean-Eric Vergne then lowered the fastest time with a 1’24.941.

With two cars eliminated, there was an opportunity for one of the ‘back four’ drivers to steal a place into Q2. As the chequered flag flew, Nico Hulkenberg was on the cusp of dropping out of qualifying in P16, but the Force India driver was able to improve to 12th with the help of the Soft tyres.

That left Kimi Raikkonen vulnerable with the Ferrari driver now in P16 and with the Finn in the pits, Jules Bianchi stunned the thousands of Finnish fans in attendance by knocking the former world champion out.

Kamui Kobayashi, Max Chilton and Marcus Ericsson were also duly eliminated, leaving Lewis Hamilton and Pastor Maldonado to start from the final row of the grid for tomorrow’s race.

The second session started in slightly warmer and brighter conditions than the first as the threat of rain appeared to be subsiding.

The two Force India drivers were the first drivers on track, but their initial lap times were quickly eclipsed by Daniil Kvyat’s Toro Rosso.

With all the top teams now on Soft tyres, Nico Rosberg set the quickest time of the weekend with a 1’23.310, almost seven tenths quicker than Valtteri Bottas’s first attempt in the Williams.

Red Bull’s first efforts proved better than the Williams’, but both Sebastian Vettel and Daniel Ricciardo were three tenths adrift of the Mercedes.

With six minutes remaining,Sergio Perez’s session was ended by a hydraulic leak – a problem that had hit his team mate Nico Hulkenberg in third practice.

The track fell silent until just over three minutes remaining, with both Force Indias, Saubers, Romain Grojean’s Lotus and Bianchi’s Marussia all set to be eliminated, with Vergne, Jenson Button and Daniil Kvyat occupying the final spots for Q3.

Felipe Massa improved his best time to help guarantee his place in the final session, as Nico Hulkenberg jumped into Q3 with a 1’24.647.

With the chequered flag out, Daniil Kvyat spun his Toro Rosso on the entry to Turn 12, leaving his car stranded on the outside of the corner and forcing double yellow flags, ruining any chances of last minute improvement.

Hulkenberg’s gain was Kvyat’s loss as the Force India only just held on to tenth. Vergne and Magnussen also secured a place into Q3, while Sutil, Perez, Gutierrez, Grosjean and Bianchi were all eliminated.

Ahead of the crucial final session, the umbrellas began to appear in the grandstands as rain drops began to fall around the circuit.

With the circuit not due to stay dry for very long, the was an immediate rush out on to the track as the session began with all drivers looking to try and set a time on Soft tyres before the circuit became too wet to improve.

Nico Rosberg was the first man across the line and arrived at the braking zone of Turn 1 to find that the rain was now streaming onto the track, causing him to miss the first corner entirely and creep around the tarmac run-off on his Soft tyres.

Behind him, however, Kevin Magnussen was not so lucky. The McLaren rookie found no traction into the now wet braking zone on his dry tyres and speared straight into the barriers, putting him out of the session and causing the session to be stopped. Magnussen climbed out of the car uninjured.

While the teams waited for the session to be resumed with ten minutes remaining, the rain stopped. Rosberg ventured out first once more with another set of Soft dry tyres and posted a very cautious 1’26.488 with his first banker lap, which was immediately beaten by Daniel Ricciardo, who was then eclipsed by over a second by Valtteri Bottas’s 1’24.259.

With just under five minutes to go and with no more threat of any further rain, Sebastian Vettel stormed to provisional pole by over eight tenths with a 1’23.415. But that did not last long as Nico Rosberg snatched back the top spot by just under two tenths with his first truly flying lap of the session.

As all nine remaining cars set out for their final attempts, the battle for pole looked to be a straight fight between Rosberg and Vettel, but Valtteri Bottas suddenly leapt up into second by just under a tenth in the Williams.

Sebastian Vettel’s final effort was good enough to take provisional pole as the chequered flag fell, but it was not to be for the reigning champion as Nico Rosberg’s final lap was good enough to secure him his third successive pole at the death.

Valtteri Bottas and Daniel Ricciardo will share the second row of the grid, with former team mates Fernando Alonso and Felipe Massa behind them. Jenson Button will line up seventh, ahead of Jean-Eric Vergne and Nico Hulkenberg in ninth.

257 comments on “Rosberg on pole, Hamilton to start from back after fire”