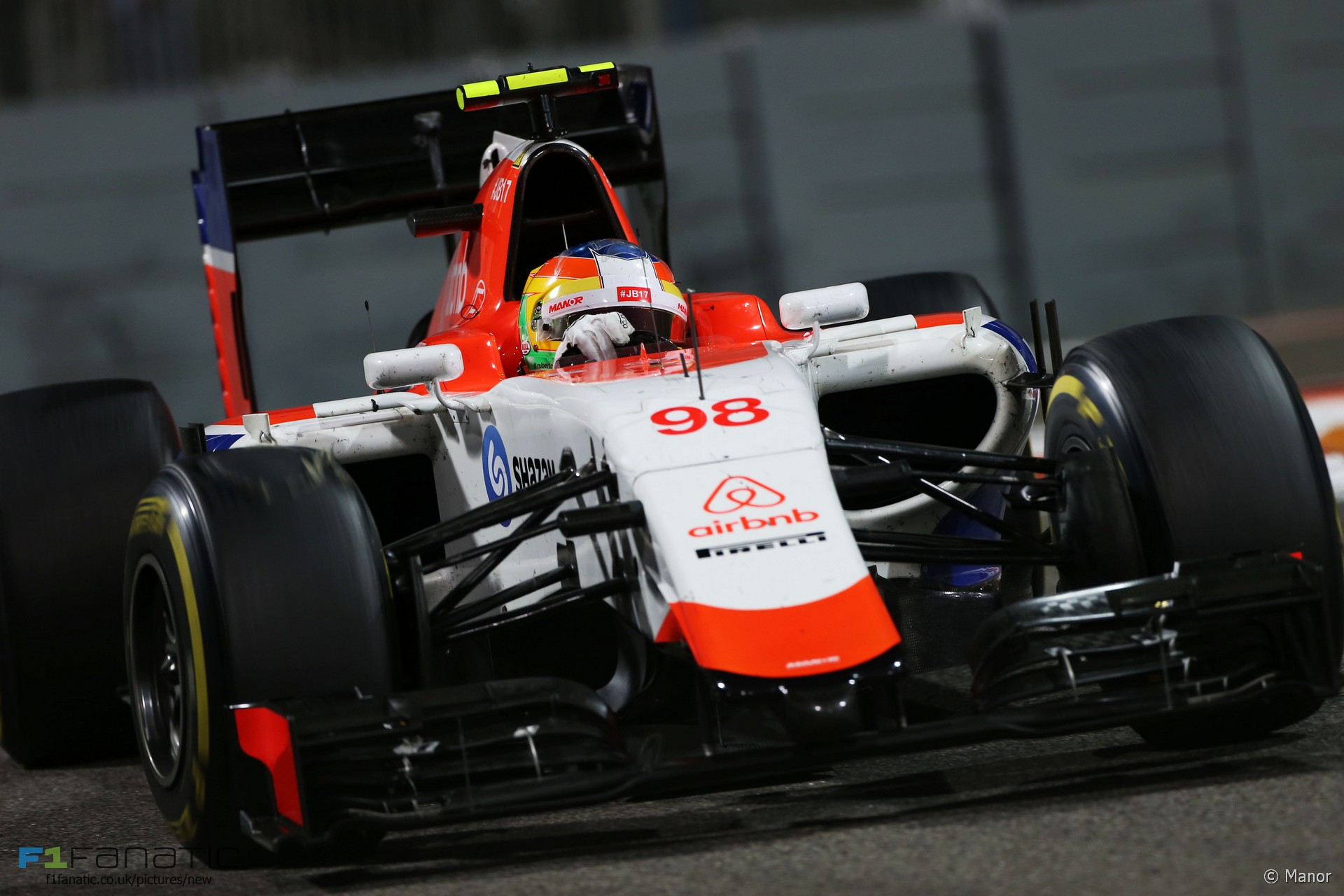 Placing Manor’s three drivers among their competitors this season is made difficult by the fact the car was never quick enough for them to be able to seriously race their rivals for position.

Roberto Merhi’s situation was made more difficult by the fact he began the season at a weight disadvantage to his team mate owing to the difference in height between the two. Merhi shaved a few kilogrammes off but still ended up around 10kg up on the other car, which will have had a bearing on their relative performances.

At the beginning of the season Merhi’s unfamiliarity with F1 protocol tripped him up during Safety Car periods in Malaysia and Bahrain – the latter leading to a penalty. He lagged behind Stevens in the opening rounds – to the tune of some 40 seconds in Spain – but gradually he began to turn it around.

He registered victories against his team mate at some of F1’s most demanding venues including Monaco and Spa-Francorchamps – both tracks which the inexperienced pair had raced at before owing to their Formula Renault 3.5 experience (Merhi even continued in the championship for part of this season).

However with Alexander Rossi taking over for most of the final races, Merhi only started two of the final seven events. He was off his game on his final appearance in Abu Dhabi, struggling with his brakes and having to start from the pits after making changes to his suspension. In the meantime his replacement appeared to have raised the bar.

It was a disappointing outcome for the 2011 European F3 champion, who returned to single-seaters last year after treading water in the DTM for two seasons. The margin between him and Stevens clearly closed as the season progressed, and given a full year in the car he could well have come out on top.

Malaysia – Did 23 laps in practice – three fewer than Stevens – and his best lap in third practice was 6.98% slower than than fastest time. He wasn’t able to get within the 107% mark in qualifying but the stewards allowed him to start on the strength of his practice performance. Surprisingly the car ran reliably to the end, and Merhi finished a thrice-lapped 15th, albeit after holding up Button due to his hesitation behind the Safety Car.

China – Went into qualifying on the back foot after electrical problems in final practice kept him from doing a run on the soft tyres. Passed Stevens at the start, but was re-passed during the opening stint. Ran last for the vast majority of the race and was around 15 seconds behind his team mate at the time of the Safety Car, later receiving a five second time penalty after failing to adhere to the Safety Car time delta.

Bahrain – Slipped up at turn four on his final run in qualifying and ended up over a second off his team mate as a result. He got ahead of Stevens at the start but felt he took too much out of his tyres trying to keep his team mate behind at the start.

Spain – Merhi is 12 kilos heavier than his team mate, which goes some way towards explaining the performance gap between them. He was unable to do his second run in qualifying when his car developed an ERS fault after he’d been called to the weigh bridge, and in the race he finished a good 40 seconds behind his team mate. It remains to be seen if he’ll be in the car for the next race.

Monaco – Crashed during practice but brought his car home ahead of his team mate for the first time, while avoiding a penalty for crossing the pit lane exit line.

Canada – Beat Stevens in qualifying for the first time this year by little more than two-hundredths of a second, and was on course to lead him home in the race until a driveshaft fault put him out.

Austria – Technical trouble limited his running on Friday but despite that and not having run the super-soft tyre he comfortably beat his team mate – and was faster through sector one than Raikkonen’s Ferrari! Unsurprisingly he was the last driver running at the flag, though 14th is Manor’s best result so far.

Britain – Had a spin at Luffield during second practice but managed to get going again just as the red flags came out. Was one of many drivers to have a time deleted in qualifying, but even so was a long was off his team mate’s pace. Nonetheless he avoided the major pitfalls in the race to take a best-yet finish of 12th.

Hungary – Having already raced at the Hungaroring this year, Merhi sat out the first practice session while Fabio Leimer had his first run in the car. Nonetheless he out-qualified Stevens and briefly got ahead of the Saubers at the start, but had to pit to have a loose headrest seen to. He was running ahead of Stevens when his team mate dropped out.

Belgium – Another driver who raced at Spa earlier this year – in Formula Renault 3.5 – Merhi lost time in final practice due to a hydraulic problem and qualified behind his team mate. However he came out on top in the race, thanks in part to the team managing his strategy to limit the amount of time he spent letting the leaders past.

Italy – Felt there was room to improve on his performance and it looked that was as he was consistently shaded by Stevens.

Russia – Back for his penultimate race of the year, Merhi’s run to 13th was incident-free.

Abu Dhabi – Back in the Manor after a three-race absence, Merhi flat-spotted one set of tyres in Q1 and was delayed by traffic on the other. Overnight suspension changes to his car meant a pit lane start, but in the race he continued to struggle with his brakes and finished well behind the other car.

Had a terrible beginning of the year. But after a few races found his place. Still not the best driver around in my opinion.
@JLracing

What’s your verdict on Roberto Merhi’s 2015 season? Which drivers do you feel he performed better or worse than? Have your say in the comments.

Add your views on the other drivers here: