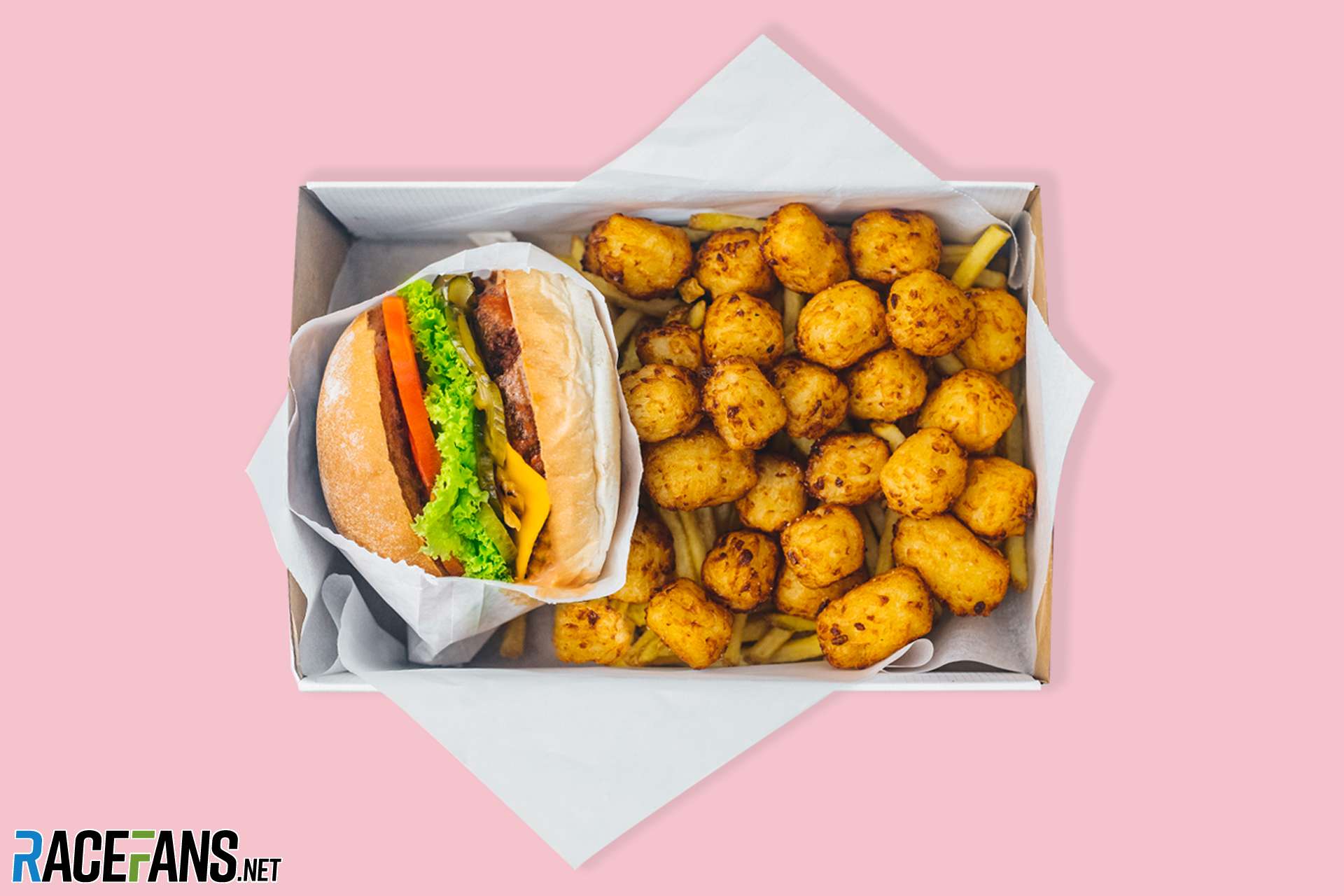 Lewis Hamilton keeps piling up the F1 silverware despite his many extra-curricular activities. Now, to go along with ‘fashion designer’ and ‘guest vocalist’, he can add ‘restaurateur’.

He has teamed up with Ryan Bish and his hospitality firm Cream Group to launch Neatburger, which opened during F1’s summer break. Following the ‘plant-based’ diet Hamilton adopted a year and a half ago, there is not a scrap of meat or dairy on the premises.

Hamilton is keen to switch more people on to the eating regime which he describes as “a life-changer”. And he believes giving punters a taste of the unreal thing is the way to do it.

Switching to plant-based food has “definitely had a really positive impact on my daily life in terms of the energy that I have,” he continues, “just the feeling that I have when I’m at work [and] my tiredness – I’m very rarely ever tired.”

So on the Wednesday between the Belgian and Italian grands prix I turn up for a taste test at Neatburger’s first location, on a side alley off the high-footfall Oxford and Regent streets in the heart of London. Even without the star allure of Hamilton, whose association is not obviously promoted in the building, a sizeable media contingent has assembled. But then, free food will do that…

Obviously I have to go with the star draw, the Neatburger itself. The hot dogs aren’t available yet, so I add a ‘This Isn’t Chicken’ burger to ensure my, ahem, ‘research’ is as thorough as it can be.

The burgers pass the first two tests: they look the part and the aroma is pure ‘burger joint’, as distinct from ‘slab of meat’. There’s burger sauce and gherkins and clear evidence of a grill being in action.

The Neatburger itself is a slim thing, buried inside its bun, salad and slick of dairy-free Trump-hued ‘cheese’. It’s produced by Beyond Meat, whose pea protein-based patties have been hyped as one of the most convincing plant-based alternatives to meat, thanks partly to the use of beetroot juice to simulate myoglobin, the liquid commonly mis-termed ‘blood’ which leeches from medium-rare beef.

Unfortunately for me, but luckily for my shirt, the Neatburger doesn’t perform its celebrated ‘bleeding’ gimmick. I put this down to it being noticeably thinner and therefore drier than the Instagrammable examples I’ve seen online. (Though, to be fair, no smaller than the version in their publicity material, an example of which is above.)

The first bite yields a strong grill flavour and a crust with a satisfying savoury edge. It’s definitely tasty, more so when taken as a whole with its accompaniments. Pull a piece of the patty out and the texture – more mealy than meaty – is not going to fool anyone into thinking this is beef. That said, the whole genuinely reminds me of the last Big Mac I ate, back when Hamilton was dominating Formula Renault.

The poultry-free chicken burger is actually the more impressive of the two. Fashioned from a gluten-based product called seitan, it has a fibruous texture which could genuinely pass for chicken. It too is on the dry side, however.

I have to appreciate the science which has gone into this, though I can’t say either left me hankering for another. The Beyond Meat patties are also available at Honest Burger with a rather more tempting topping of smoked ‘gouda’ and chipotle ‘mayo’ (you do get through a lot of apostrophes writing about vegan food).

Hamilton’s team are hoping the mere fact the burgers are plant-based will be enough to tempt people in. That would be a gamble at any time, and now is especially tough for restaurant owners in the UK, due at least in part to the economic uncertainty arising from the purgatory of Brexit.

As with Hamilton’s other lines of interests outside F1, Neatburger is only going to be tangentially interesting to the motor sport fan. But Hamilton commands a social media army which outnumbers that of all his rivals combined, and many will undoubtedly be swayed by the champion’s encouragement to give vegan food a try.

The world is changing, and so is the world champion. A recent convert to plant-based eating, Hamilton’s arguments in favour of it rest mainly on how the diet has benefited him personally. But we all stand to gain from reducing, if not necessarily eliminating, our consumption of meat and the energy used by its production. For that alone I think Hamilton’s latest venture is one to applaud.

And I hope drivers opening restaurants becomes a trend throughout the rest of the grid. Vettel’s Spätzles, anyone?

124 comments on “I ate Hamilton’s meat-free burgers: Here’s my verdict”