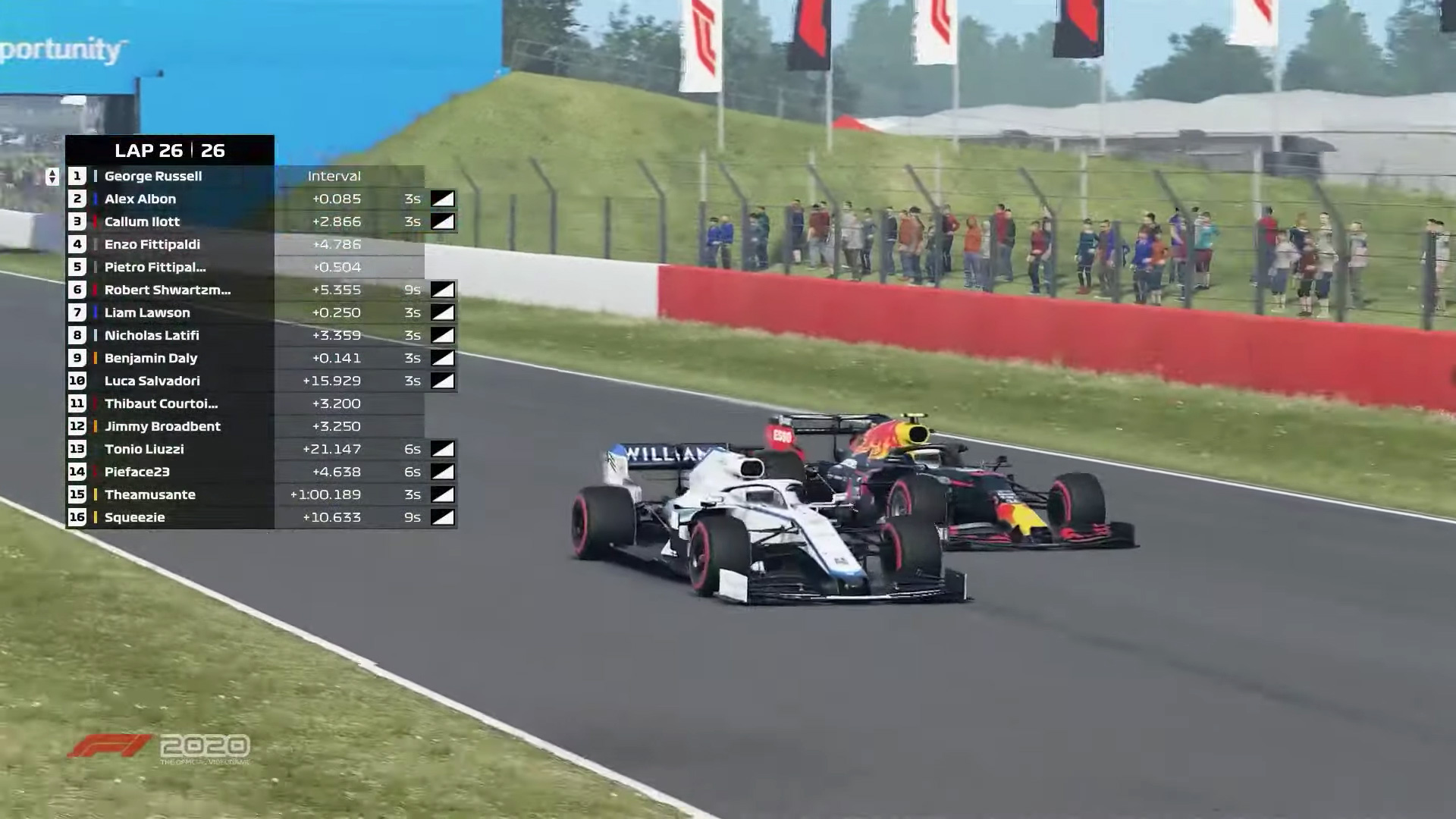 In the round-up: Having missed the first Virtual Grand Prix of the new series, George Russell returned to extend the four-race winning streak he ended last season with.

Russell and Alexander Albon swapped the lead over the final laps of the second Virtual Grand Prix, but it was immaterial to the outcome of the race. Albon incurred a three-second time penalty at half-distance, so it made no difference that he nipped by Russell on the Hangar straight on the final lap.

The result means Russell remains undefeated in the last five Virtual GPs he has shown up for. Callum Ilott took third, having led the early stages thanks to pole position won for him by esports Pro driver Brendon Leigh in the qualifying sprint race.

Enzo Fittipaldi, who won in Russell’s absence last week, came in fifth behind brother and Haas team mate Pietro Fittipaldi. Haas lead the points standings with one round to go, on 57 points ahead of Ferrari’s squad, which competes under the name FDA Esports.

Aside from Russell, the only current Formula 1 driver to compete in the race was his real-world team mate Nicholas Latifi, who took seventh behind Red Bull Junior Team member Liam Lawson. As in the opening round, many drivers collected penalties in the half-distance event, with only five finishers not having time added.

"It makes me smile to read headlines like ‘Bizzarri at the wheel of Ferrari,’ but if anything, they make me regret not having pursued a career as a racing driver! The rest is just gossip."

"The cause of the fire is still unknown but it is thought to have devastated the majority of the pits, the press room and the VIP areas but fortunately it has not caused any injuries."

Hill: It 'broke my heart' to turn Stewart down for 1997 (Autosport)

"I just thought career-wise, it would have been a big risk. They'd never run a Formula 1 team before. I think Jackie would let me off that one."

Should we resist the temptation to label promising junior drivers as “future champions”?

I get a little sick of hearing the term “future champion” – it seems to get used all to often, and just as often the target of the conversation doesn’t ever have the car or the skill to actually be a champion.

Pretty much every driver in the field has the potential, otherwise they wouldn’t be driving in F1 but only a very few, even the so called “special” ones, end up in the right car at the right time.

Yes Russell, Leclerc, Verstappen etc are all great drivers, but reality says that it’s just as possible that none of them will ever become a champion due to either not having the right equipment or someone more special coming along in the interim.
DB-C90 (@dbradock)