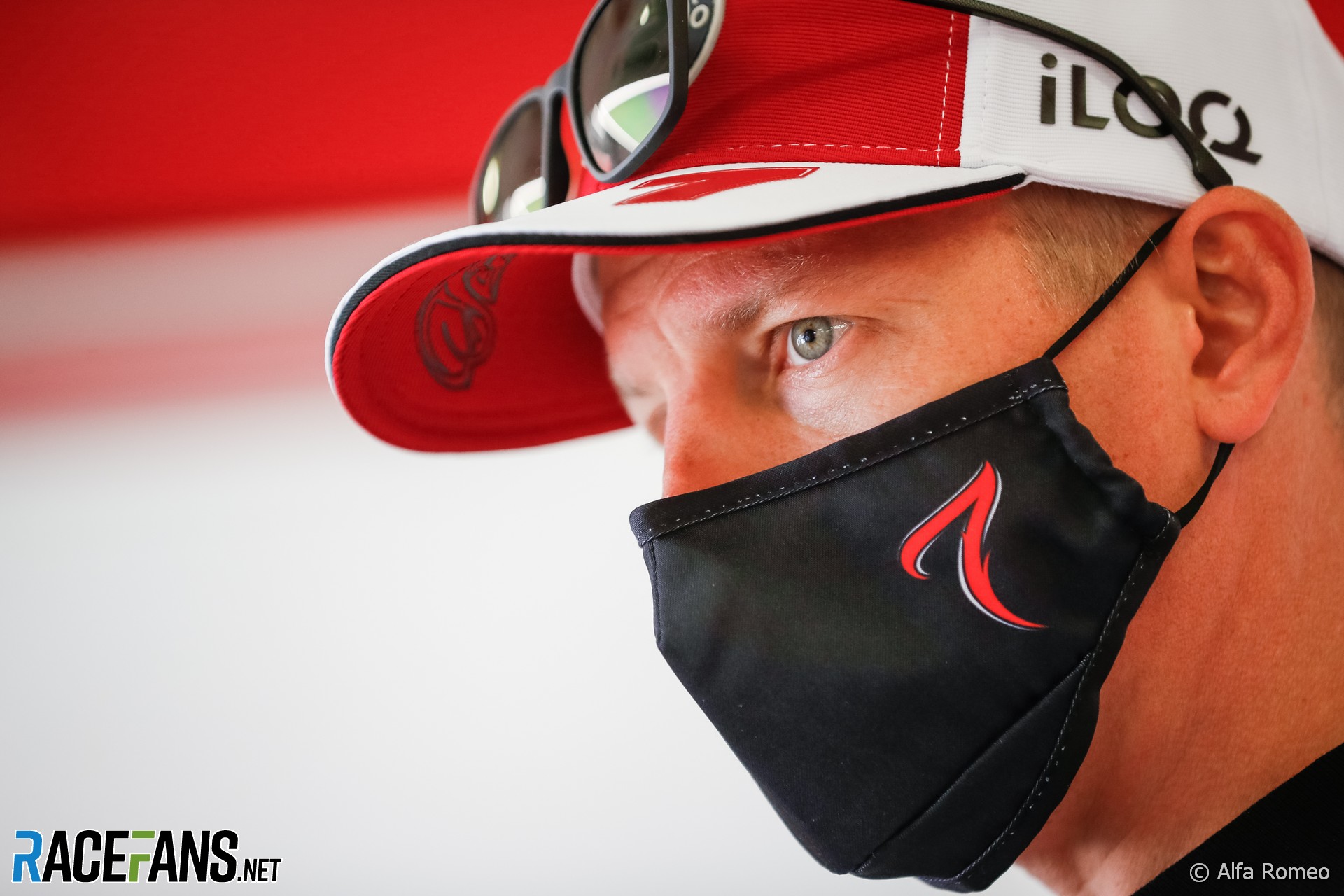 Alfa Romeo’s attempt to recover the points Kimi Raikkonen lost when he was penalised in the Emilia-Romagna Grand Prix has failed.

The stewards agreed earlier today to a formal review of the incident which led to Raikkonen receiving a 30-second time penalty. However the original decision was upheld in the hearing.

Raikkonen was penalised for failing to re-establish his correct starting position after falling behind two cars when he spun off the track on the lap the race restarted. The field initially followed the Safety Car, which then entered the pits.

The review was granted after Alfa Romeo contested the stewards’ claim that their original decision to penalise Raikkonen was consistent with past precedents. While the stewards originally believed precedents existed arose from previous Formula 2 and Formula 3 races, this was not made clear in the original hearing, and it was later agreed no such precedents existed.

The case therefore hinged on whether the stewards’s interpretation of the restart rules were correct. Central to the matter was whether Raikkonen was required to stay in position, as is the case during Safety Car periods, or retake his original position, as drivers must do in formation laps before race starts or restarts.

Alfa Romeo argued that in discussions around the introduction of the regulations three years ago, the intention had been for drivers to keep their position in such instances, as Raikkonen did. While the stewards acknowledged in their original verdict the potential conflict between the Safety Car and Rolling Restart rules, they determined that a reading of the rules gave no reason to believe the Rolling Restart regulations should be superseded by the Safety Car procedure, and Raikkonen was therefore at fault by not retaking his original position.

Raikkonen’s penalty was therefore upheld. Alfa Romeo issued a statement in which they accepted the decision:

“Alfa Romeo Racing Orlen acknowledges the decision of the FIA and the Emilia Romagna Grand Prix stewards to uphold the original penalty to driver Kimi Raikkonen, following a review of the incident,” it said. “The team’s focus is now fully on next weekend’s Spanish Grand Prix.”

Alpine’s drivers will therefore retain the extra points they scored as a result of Raikkonen’s penalty. Esteban Ocon moved up to ninth place in the final classification, while Fernando Alonso scored his first point of 2021 with 10th.

The stewards originally heard this case after the race, heard from the driver of Car 7 (Kimi Raikkonen), and the team representative and reviewed multiple angles of video evidence, telemetry and team radio. Thereafter, we issued our decision Document 60.

The regulations for the resumption of a race after a suspension were changed in 2018. These include the option for a standing re-start or a rolling re-start. A red flag during a Formula One race is a rare occurrence and the circumstances for a rolling restart are even rarer. Since 2018 there has been no precedence for the circumstance that the driver Raikkonen was in. In the stewards’ original decision, we stated that “The rule requiring a car to enter the pit lane if it fails to regain its position is consistent amongst several championships, has been in the FIA Formula One Sporting Regulations for several years and has been consistently applied.” All of this is correct, except that the stewards recognise that there has been no precedence. In making this statement the stewards were referring to Formula 2 and Formula 3 cases but did not discuss this with the competitor in the original hearing. In brief (see the full decision Document 64) this was the reason that the review was granted. Ultimately it was agreed that these cases were not on point and that no precedence exists in any championship since the regulation was enacted. Thus, the case has been reconsidered on the merits.

Art 42.6 of the FIA Formula One Sporting Regulations indicates that a driver may pass to regain his starting position including (and importantly in this case) “during the lap(s) behind the Safety Car” and if he fails to regain his position before SC1 he must enter the pit lane and start from the pits. Failure to do this incurs a mandatory penalty of a ten second stop and go penalty.

The stewards did consider the evidence presented by the competitor that the Race Director’s note from 21 July 2018 states: “For the avoidance of doubt, and with the exception of the permission given in Art. 39.16” [art number had changed], “no driver may overtake until he reaches the Line, unless a car slows with an obvious problem.” This was offered to show that the intent was that overtaking should not be allowed. However, this note refers to the original start. Rightly or wrongly, the current Art 36.15.c and Art 42.6 are written differently and allow passing under different circumstances and so we don’t find this note to be relevant.

The Rolling Re-Start procedure at the resumption of the race is covered under Art. 42.12. The stewards pointed out in the original decision that the fact that this is handled differently than a re-start after a Safety Car period is contradictory. The competitor stated that it was the original intent of the working groups that proposed the regulations, that the Rolling Start at the beginning of the race, a re-start after a Safety Car period and a Rolling Restart at the resumption of a race should be handled in the same manner. While the stewards accept that this may well have been the case, the regulations, as published, for each situation are different.

Art 42.12 states that “No driver may overtake another car on the track until he passes the Line” …”for the first time after the Safety Car has returned to the pits.” As pointed out in the original decision, this appears to contradict Art 42.6, which required overtaking.

The competitor asserts that once a “Rolling Start” has been declared, Art 42.12 supersedes Art 42.6. In part, their logic being that a Rolling Start is essentially similar to a Safety Car period. They point to the fact that under Art 39.8 b of the Safety Car regulations, that passing is permitted under only limited circumstances, and Art 36.15.c is one such circumstance (referring to regaining position under the original start), but Art 42.12 (Rolling Restart) is not. However, Art 42.6 is also not included, and this gives an affirmative direction to pass in a circumstance that would be behind the Safety Car.

Further, the stewards find that the prohibition to pass before the line can also be found in Art. 36.15.f. regarding the original start. The phrase before Art 36.15.f and the prohibition to pass before the Line in Art 42.12 is that the “FIA light panels will be extinguished and replaced by waved green flags with green lights at the Line.” Read in sequence, the stewards find that the regulation is intended to instruct the drivers when they are permitted to resume racing passes and is therefore does not supersede the regulations that permit passing to regain the re-start order.

Further, and most simply, as written, there is nothing explicit in Art 42.12 that states that it supersedes Art 42.6.

The stewards accept the competitor’s position that the rules probably do not match the original intent. But they have been in the regulations since 2018. Where there is ambiguity, the benefit of the doubt should accrue to the competitor. But while the stewards have pointed out in the original decision that there is a conflict of intent between the Safety Car restart regulation, and the Resumption of a Race Rolling Start regulation, the stewards believe that each is clear enough as written in its own right.

So, while the stewards understand why the competitor acted as they did – first to tell the driver to re-take his position, then later to tell him not to re-take the position – the stewards stand by their original decision that the competitor committed a breach of Art. 42.6 by failing to re-establish his starting position during the lap behind the Safety Car.

As a final matter the competitor pointed out that Art. 42.12 states “If, after several laps behind the safety car, track conditions are considered unsuitable to start the race from a standing start, the message “Rolling Start” will be sent to all Competitors…”

In this case, the message “Rolling Start” was issued as the cars were leaving pit lane, rather than after “several laps”. The competitor asserts that had they had several laps, they would have had the opportunity to discuss the situation with race control and avoided the breach. The stewards accept that this is a mitigating circumstance.

However, a breach of Art. 42.6 draws a mandatory penalty of a 10 second stop-and-go. The mandatory penalties that are in the FIA Formula One Sporting Regulations are specifically intended to take discretion regarding penalties out of the hands of the stewards, even or specifically when the stewards find mitigating circumstances. The competitors are a part of writing these regulations.

Therefore, the stewards re-affirm their decision and issue a 10-second stop-and-go penalty, which as it was assessed after the race is converted to a 30-second time penalty in accordance with Art. 38.2 of the FIA Formula One Sporting Regulations.

Competitors are reminded that they have the right to appeal certain decisions of the stewards, in accordance with Article 15 of the FIA International Sporting Code and Article 10.1.1 of the FIA Judicial and Disciplinary Rules, within the applicable time limits. Should any appeal result, the stewards hereby delegate the authority to receive the appeal to the following panel of stewards for the ongoing Portuguese Grand Prix.