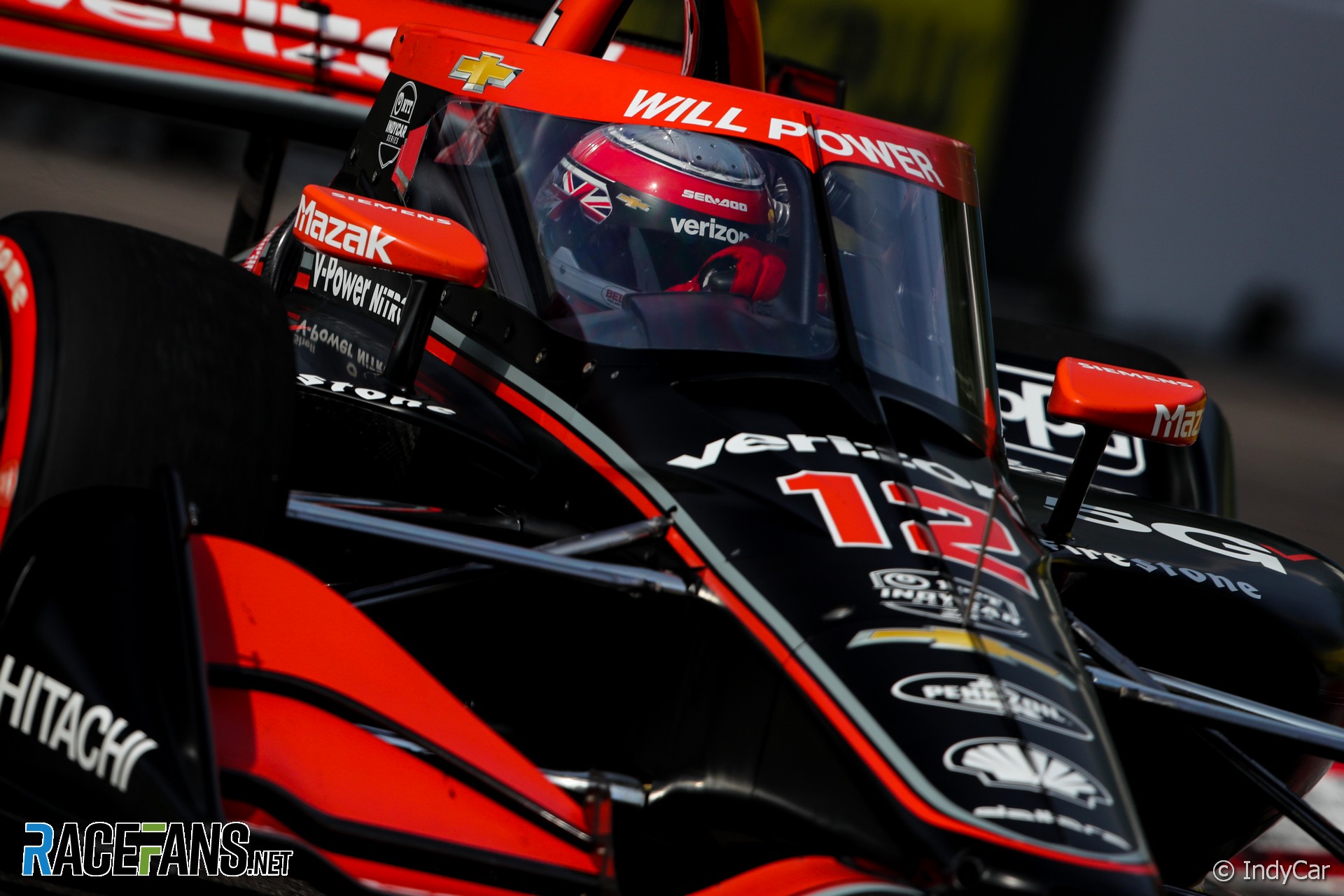 In the round-up: As IndyCar gets back into action in Detroit after the Indianapolis 500, exciting news emerges from its new star name.

Penske’s Will Power was fastest in the single practice session for IndyCar’s Detroit double-header, setting the pace by 0.1523 seconds.

Despite warm afternoon temperatures and a considerable amount of rubber laid down by IMSA and Indy Lights sessions, IndyCar drivers found the track slippery when they first headed out and it didn’t take long for Penske’s Scott McLaughlin and Chip Ganassi’s Jimmie Johnson to spin off and stop anyone else from setting laps.

The track was cleared while red flags were waved, at which point McLaughlin was actually top of the times.

After the restart the session was without drama, with four seconds being knocked off the fastest time by the time the clock had counted down to zero.

Andretti’s Ryan Hunter-Reay and Alexander Rossi both spent time at the top, while McLaren SP’s Patricio O’Ward was also in first place for a lengthy period of time when many were in the pits, but going into the final 10 minutes it was Power who looked the smoothest and ended up being the fastest.

Rossi briefly returned to the top shortly before AJ Foyt’s Sebastien Bourdais became Power’s closest opponent on pace. The Australian had the edge though, with O’Ward slotting back into third behind Bourdais at the end.

Giuliano Alesi will race in next weekend’s fourth round of the Super Formula season after he won on his second start in the series last time out.

The former Ferrari Driver Academy member relocated his career to Japan at the start of this year, racing in Formula 3-level series Super Formula Lights and the Super GT sportscar series.

However European commitments for ex-F1 driver Kazuki Nakajima meant Alesi got called up to take his Super Formula seat at the TOM’S team for the second round of the season at Suzuka and he qualified eighth and finished ninth on his debut.

With Nakajima unavailable for the Autopolis round after that, Alesi was handed the chance to race again and he ended up taking pole and then victory in a rain-shortened race. With travel restrictions continuing to sideline Nakajima, Alesi now has the chance to build on that result at Sportsland Sugo alongside his title bid in the SF Lights support series.

The absence of a 2020 race and the addition of the aeroscreen will make for a dramatically different driving experience in IndyCar’s Detroit double-header according to McLaren SP’s drivers.

“It’s probably going to plough more than what it used to, ploughing meaning just a bunch of understeer,” said Patricio O’Ward.

“Historically the track just keeps getting bumpier and bumpier and bumpier every year, so I feel like this year will be more of a change than what we have felt from year to year in the past because there’s been two winters on it already from the last time we were there.”

While the aeroscreen was introduced in IndyCar last year, it wasn’t used on a street circuit in warm conditions until this year’s Grand Prix of St. Petersburg and it proved physically tough with the reduced air flow. The same is expected in Detroit, but its effect on car handling is still up for debate as it works “the front axle a lot harder” than before.

“I think tracks like this have been less affected by the aeroscreen,” said O’Ward’s team mate Felix Rosenqvist.

“When we came to St. Pete for the first time, it seemed like we were going pretty quick still. It seems like the faster the track and the higher speed corners are really affected worse by aeroscreen than like the long corners, and on a street track you generally just have 90-degree corners and you don’t really load up the car very long anywhere. I don’t think it’s going to be a massive difference to be honest. I think it’s going to be pretty good.”

From planning and project managing to garage set-up and pack up – and all of the requests in between – meet Assistant Team Manager, @deborahlyall who makes sure @JaguarRacing crew is in top form and ready to take to the track 🙌#JaguarElectrifies pic.twitter.com/5ljUp4SXTp

What a magic moment this was!

Want to chat with your favourite driver? Sign up to Fan Meet Driver >> https://t.co/sASi8paBlE#F1 🏳️‍🌈 pic.twitter.com/uUkrLLJMgd

"Rachel Brookes has been an integral part of Sky’s F1 coverage since 2013.

Now in her ninth season with the team, Brookes presents coverage of Formula 2 and Formula 3, as well as Sky’s magazine programme The F1 Show on Thursday evenings. New for 2021, she also commentates on the first Friday practice session.

Ahead of the 2021 season, Motorsport Broadcasting caught up with Brookes to discuss her broadcasting career to date, how Covid-19 has impacted broadcasting, amongst other topics."

"Kirkwood, 22, who is seeking to become the first driver to win championships on all three levels of the Road to Indy ladder, laid down a marker by posting the fastest time in this morning’s practice at 1'24.2423. He found almost a full second in the closing moments of this afternoon’s 30-minute qualifying session, topping the charts with a lap at 1'23.2582, an average speed of 101.612mph."

"As that stoppage came with less than five minutes left of the session remaining, on-track action should not have then restarted according to the championship regulations. However the race director forgot and called for green flags to be waved, so the drivers went back out to finish qualifying. With 27 seconds left of the session to go, Bearman went fastest with a 1'31.021s and snatched pole from Tramnitz. The result is now taken from before the red flag."

"Originally, Harvey was supposed to have an entry with Andretti for the 2017 Indy 500, but Fernando Alonso was announced in what was to be Harvey’s seat. Luckily, he was informed that he would still have a ride for the event with Shank."

Alfa Romeo believes the gains they’ve made with their C41 car this year is a “big step forward” but bad luck means its improved package has only taken two points in the hands of Kimi Raikkonen and Antonio Giovinazzi over the first six races of 2021. However Wsrgo thinks it’s the drivers, rather than luck, holding the team back.

Before the legion of Kimi fans devour me I wonder if a part of this is down to drivers underperforming? I’m not really sure if either driver is driving beyond the level of the car on even a semi-regular basis, certainly nowhere near what Leclerc was doing in mid to late 2018.

Sadly for Alfa they’ve made the wrong choice of keeping the same driver line-up in a year when rules have remained static, and are faced with making a potentially Haas-like choice for 2022, when they really needed some continuity. Call me a hater all you like, but I’m not sure how fair it is to the likes of [Callum] Ilott and [Theo] Pourchaire whose careers would be nixed because a 42-year-old man wants to keep doing his hobby and isn’t really driving the team forward with his leadership substantially.Wsrgo

13 comments on “Power fastest in IndyCar practice in Detroit”