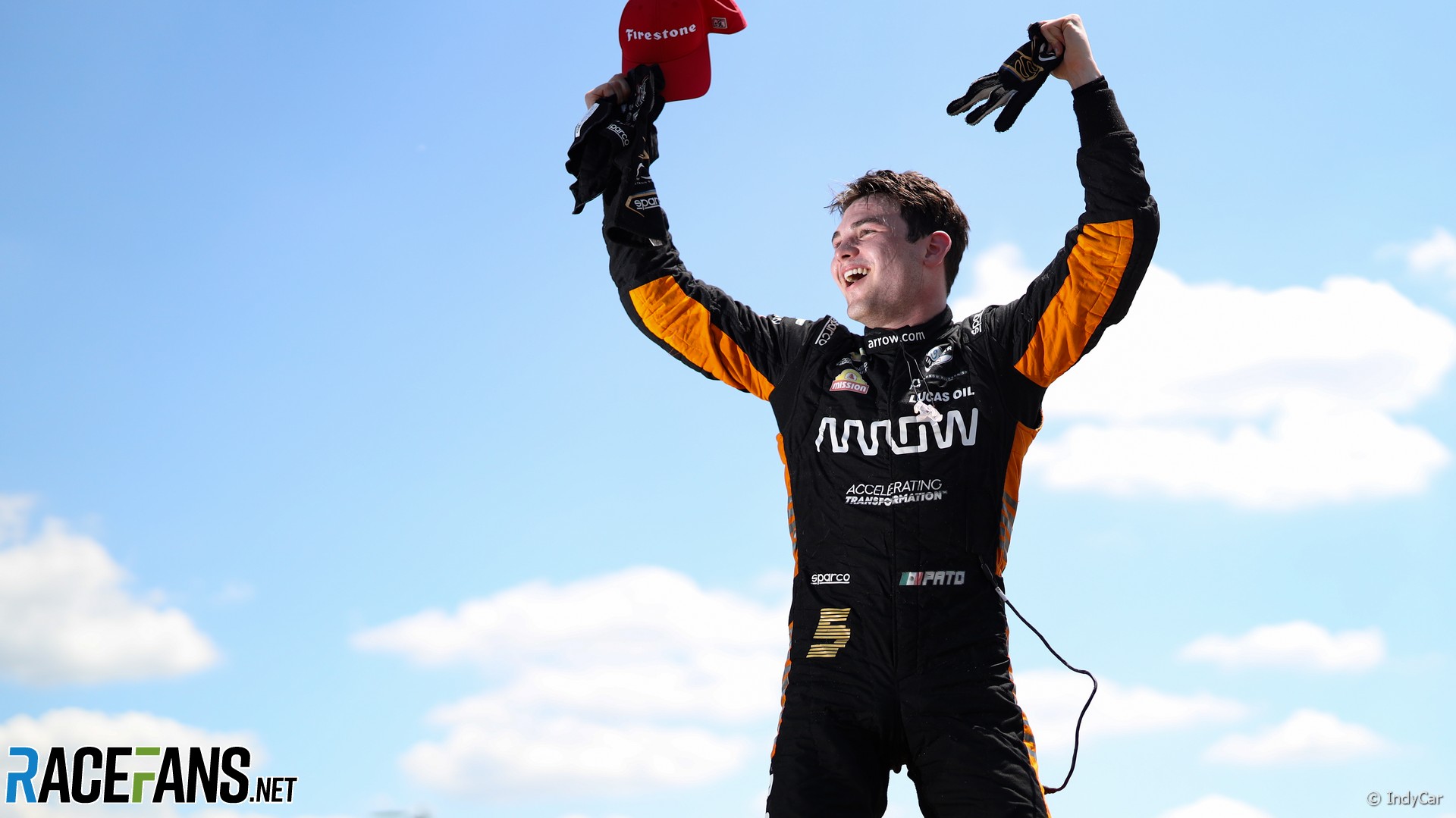 Patricio O’Ward drove brilliantly from 16th on the grid to take the lead with less than three laps to go and drive away to his second win of the 2021 IndyCar Series season in Sunday’s second race of the Detroit Grand Prix double-header. O’Ward, who now leads the IndyCar Series championship by a single point, became the first repeat winner of 2021, and denied Josef Newgarden a flag-to-flag first victory of the 2021 season.

Newgarden led 67 out of 70 laps, starting from pole on the primary compound tyres, while all of his closest pursuers started the race on the alternate tyres. After the first caution, which came out on the opening lap when Max Chilton ran into James Hinchcliffe, Newgarden began to pull away from the field. By the time Newgarden made his first pit stop on lap 20 his lead over second-place Colton Herta was 13.5 seconds.

Newgarden followed that up with another quick stint, going until lap 46 on another set of primary tyres. But Herta, who started the race on alternate tyres, started to close on Newgarden over the course of the second stint. Herta had the advantage in the final stint, Newgarden having to run his last stint on the used set of alternate tyres that he ran in qualifying.

Two cautions in the final 20 laps – one for a spin involving rookie Jimmie Johnson, and another for a fiery brake failure on Romain Grosjean’s car – bunched up the field, and it was only at this juncture that O’Ward entered the frame for victory. On the first safety car restart, he forcefully overtook Scott Dixon for fifth into turn one. On the second restart, O’Ward got past two cars in just three corners, and then overtook Herta for second with five laps to go. Newgarden, O’Ward, and Herta ran nose-to-tail until a lock-up from Herta at turn three caused him to fall back.

With three laps remaining, O’Ward pounced on Newgarden after a strong run out of turn six – the same place where his McLaren SP teammate Felix Rosenqvist suffered his heavy crash yesterday – and made his move on the run down the backstretch along Strand Drive to rip the lead away from Newgarden. He then drove away to a final victory margin of 6.7 seconds.

After the race, O’Ward dedicated his victory not only to his team mate Rosenqvist – who was discharged from a local hospital this morning – but also to the late co-owner of McLaren, Mansour Ojjeh, who passed away last week.

Newgarden held on to finish second by the skin of his teeth, just ahead of Álex Palou, who overtook Herta for the final podium position in third. Behind Herta in fourth, Graham Rahal took his second straight top five finish of the Detroit GP weekend in fifth.

Will Power extracted a measure of revenge after his gutting defeat on Saturday, by going from 20th on the grid to finish sixth using the same tyre strategy as Newgarden. Scott Dixon finished seventh ahead of Simon Pagenaud. Marcus Ericsson followed his first career win yesterday with a ninth-place finish today, from 22nd on the grid. Santino Ferrucci, who started in a back-up car after a hard crash at the end of qualifying this morning, recorded his third top-10 in as many races this season.

O’Ward’s second win of the season gives him a one-point lead in the championship over Palou, the latter taking his third podium finish from the last four races. IndyCar’s next race is in one week at the Road America circuit in Elkhart Lake, Wisconsin.