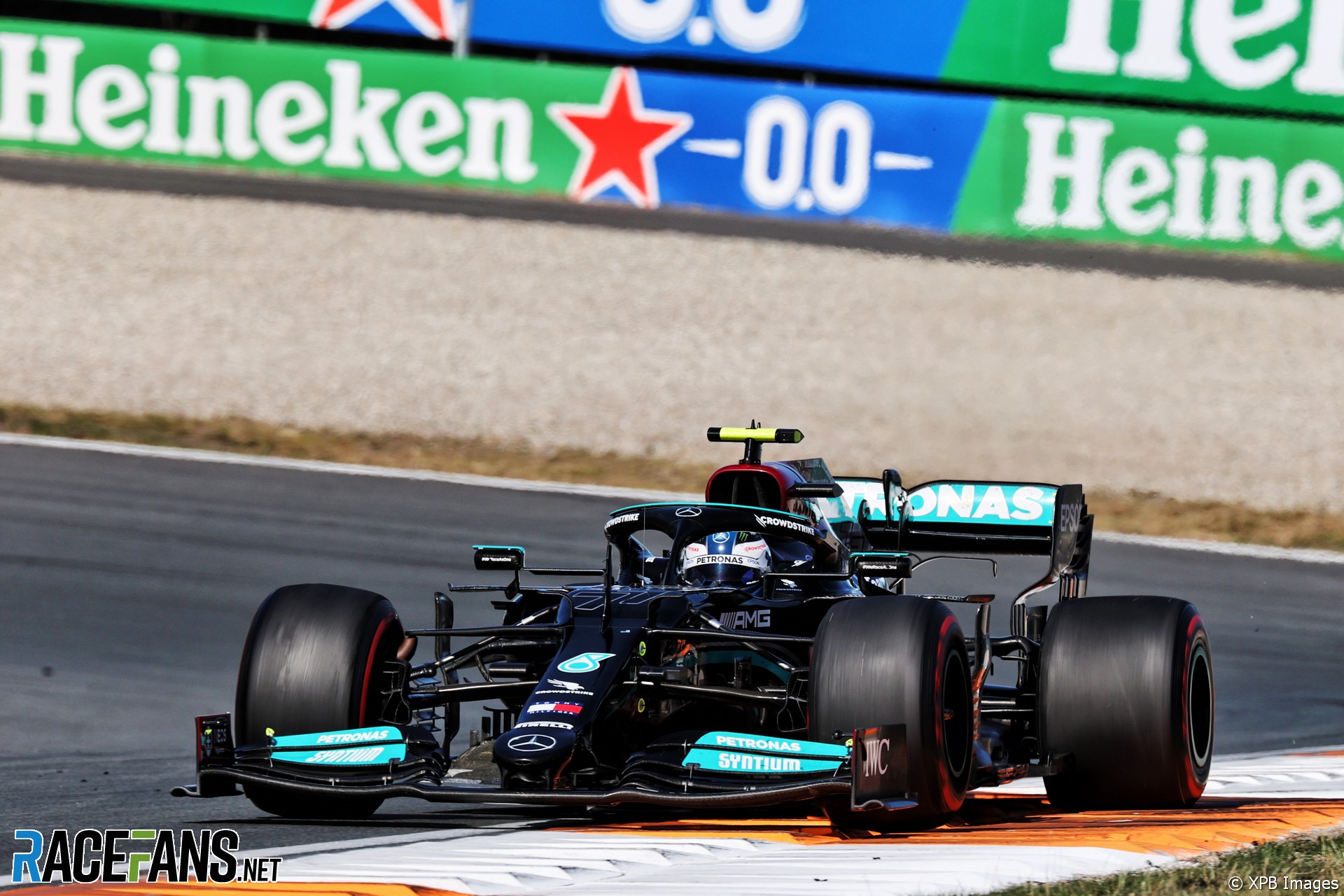 Valtteri Bottas gave Mercedes a headache in the final laps of the Dutch Grand Prix by setting the fastest lap of the race when he wasn’t supposed to.

In the final laps of the race, Max Verstappen was leading but Lewis Hamilton, in close pursuit, held the fastest lap and was therefore on course for the bonus point.

Verstappen’s quickest lap time was too close to Hamilton’s for Mercedes to feel comfortable. The Red Bull driver had set a time just one-tenth of a second slower than Hamilton. Mercedes couldn’t afford to take the risk that he might pull out a faster one on the final lap, leaving them no time to respond.

The sensible move for Mercedes, therefore, was to bring Hamilton in for a fresh set of rubber and set the fastest lap on the final tour, offering no opportunity for Verstappen to do the same.

Around the same time, Bottas in the other Mercedes was running third and increasingly struggling with his tyres. His lap times rose from the 1’14s into the 1’15s from lap 62.

Hamilton’s lead over Bottas was therefore growing. It reached 25 seconds, which was enough for him to get in and out of the pits ahead of his team mate. Mercedes, however, would have to leave Hamilton’s pit stop until the last possible moment, ensuring there was no time for Verstappen to come in after him and take the point.

Bottas therefore was brought in first. He was also told not to push for the fastest lap time. “We are not going for fastest,” said his race engineer Tony Ross.

Unable to resist himself, Bottas fired off the quickest time through the first two sectors. Mercedes jumped on it, the senior figure of chief strategist James Vowles coming on the radio telling him to “abort the fastest lap attempt”.

Bottas did back off – his final sector time was a 23.0, around seven-tenths of a second off his best. But he was so quick in the first two sectors that he did take the fastest lap.

Hamilton duly came in as planned and claimed the fastest lap himself, by the very comfortable margin of 1.4 seconds. Nonetheless, had he encountered traffic at the end of the race he might not have got it done.

Afterwards Bottas said he was just “playing around” and Hamilton’s bonus point was never in serious jeopardy.

“To be honest, there was quite a big gap ahead, a big gap behind, so for safety reasons it was a good thing to stop,” he said. “I think I could have made it to the end much faster than by stopping. But in the end the position was the same so it’s a safer option to stop at the end.

“I thought initially we would stop for the fastest lap, but then also Lewis had a gap so then Lewis stopped. So I was pushing on the first lap, sector one, two like flat-out, and then they started asking me to slow down at the end of the lap.

“I was just playing around really because obviously Lewis needs that one extra point more than me. He’s fighting for the world championship in drivers and as a team we’re trying to get the maximum points. So that’s how it is.”

Mercedes team principal Toto Wolff described Bottas’s two-thirds-flying lap as “a bit cheeky but understandable.” It came at the end of a race in which he’d played a strong team role for Hamilton by delaying Verstappen after taking the lead.

“Valtteri is always on the receiving end because this championship is so tight,” said Wolff. “He lifted off massively in the last sector. It was clear that Lewis would do the quickest lap and Valtteri knew about it.”

As Bottas returned to the pits, his race engineer made it clear he hadn’t been pulled in the pits solely for Hamilton’s benefit. “Lewis got the fastest lap, it was 11.1,” said Ross. “He had a full pit stop window before we stopped.”