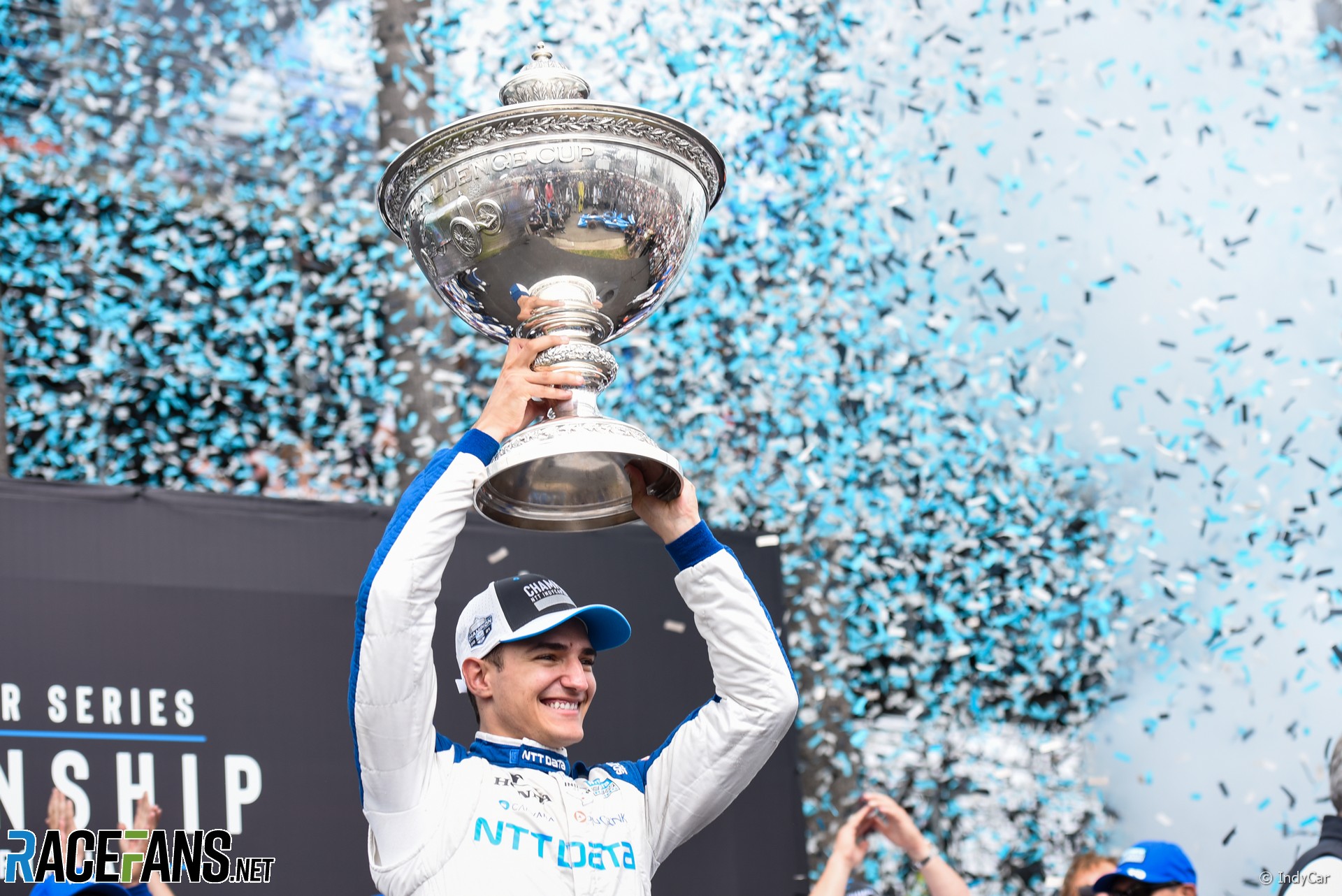 Romain Grosjean came out of Formula 1 and became a beloved rookie sensation that dominated much of the international coverage of the IndyCar Series. Dazzling performances from youngsters Colton Herta and Patricio O’Ward had them being discussed as potential candidates to step up to F1 out of IndyCar at one point in the season.

But when the chequered flag fell on the last round of the 2021 IndyCar season, it was Álex Palou – a young man who spent six years bouncing across continents, cycling through the junior formula racing ladder, only to go completely overlooked by the F1 paddock for all of his efforts – who became the series’ newest champion.

After calling his accomplishment a “dream completed,” he then made a clear statement of intent for the future: “Let’s get another one now.”

It’s the culmination of a year that began with Palou’s breakthrough victory at Barber Motorsports Park, saw him come within half a second of winning the Indianapolis 500, pick up a fortuitous late victory at Road America, then rebound from back-to-back retirements to win at Portland and seize the lead in the standings, which he never relinquished over the final three rounds.

Eight podiums and twelve top-10 finishes in 16 races were the hallmarks of Palou’s remarkable consistency in such a competitive series as IndyCar, the product of his silky smooth driving style, and his seemingly unwavering confidence and optimism.

And Ganassi, who has brought on some of the most accomplished and respected champions in the history of American open-wheel racing as a team director, was left astonished by the performance of his newest champion driver. “You’re seeing a young man that’s going to set a lot of records in this business, and he’s already starting,” he said. “I’ve got to be honest with you: It has surprised us when he came in the door and the job he’s done”

There were flashes of success over the first five seasons of Palou’s single-seater career. He was a winner in Euroformula Open, Formula V8 3.5, All-Japan Formula 3, and the GP3 Series. He had multiple podiums in European Formula 3 in 2018, and even had a solid cameo in FIA Formula 2 at the end of 2017.

None of this, however, seemed to make any impression on Formula 1 teams or their junior driver academies. Palou’s only such opportunity to be scouted by such a programme came when he got a token audition at the Ferrari Driver Academy in late 2013, which did not lead to a place on the scheme.

Fast forward to 2019, where Palou made a significant short-term change in his career trajectory, with the ultimate goal of another, long-term future goal: He signed up for dual campaigns in Japan’s two biggest national racing series, Super Formula, and Super GT. In doing so, he made the requisite connections that he needed to make his move towards IndyCar.

In Super GT, he raced in the GT300 class for McLaren Customer Racing Japan – a team managed by Le Mans winning team owner Kazumichi Goh, and also supervised by former driver Roger Yasukawa – a Japanese-American that raced for parts of seven seasons as an IndyCar journeyman. A newcomer to sports cars, Palou brought the team their only podium at Autopolis, and a pole in the last round at Motegi.

In Super Formula, Palou had Honda power and a drive at Nakajima Racing, under the wing of team namesake and national F1 hero Satoru Nakajima. In just his fourth start at Fuji Speedway, Palou dominated a wet-weather race, winning from pole, and leading every lap en route to a crushing victory, the first for Nakajima Racing since 2010.

Two weeks after that win, Palou took a flight to America for a test at Mid-Ohio Sports Car Course with Dale Coyne Racing. In two days of running, Palou left such a remarkable impression on Coyne that the long time IndyCar campaigner was determined to bring him on board as soon as possible. After the conclusion of the 2019 Japanese racing season, Dale Coyne Racing made the surprise announcement that they had partnered with Team Goh to field a full-time entry for Palou in 2020, brokered by Palou’s new manager Yasukawa, with Honda engines.

“I think it was crucial,” Palou said, of his year in Super Formula. “Super Formula is the only series apart from IndyCar, in single-seaters that you do refuelling. Fuel consumption is super important. That helped me to be here today.”

The time spent also had a profound impact in the way Palou carries himself as a driver through challenging times. “In Japan I learned a lot, losing the championship there. That made me really, really strong today. About trying to always be positive. I think it’s the only way I can get the best of myself and the best of my people around, right?”

It didn’t take long for Palou to convince IndyCar fans he was a legitimate talent. If the third-place finish in his third start at Road America didn’t do it, then qualifying on the third row for the Indianapolis 500 on his debut outing surely did.

During Indy 500 qualifying, he expressed his interest in driving for Chip Ganassi Racing directly to the man himself. And by October, when IndyCar returned to the Brickyard for a road course double-header, Ganassi had brought him in for a meeting to offer him a full-time drive with one of the series’ premier organisations.

If there is one important figure in the F1 paddock who, through those trying early years, saw the potential in Palou that went overlooked by seemingly every one of his peers – it was the late Adrian Campos Snr. The Campos Racing team founder gave Palou his first drive in Euroformula Open out of karting.

“Campos was the person that got me into single-seaters,” said Palou. “I was going to do another year of go-karting […] I didn’t even think that single-seaters were possible. He gave me that opportunity.” Palou’s mentor passed away in January at the age of 60.

Palou also received his step up to GP3, and his brief F2 cameo thanks to Campos Racing. In fact, when word surfaced of Campos’ final bid to break into F1 as a team principal in 2019, he had Palou on his short list of potential driving candidates. The bond between Palou and the Campos family endures through his friendship with Campos Racing’s current president, Adrian Campos Jnr, who also played an important role in Palou’s early career.

He may not have been an experienced ex-Formula 1 driver like Grosjean, a highly touted ex-F1 prospect like Callum Ilott, or have an F1 test deal in his pocket like his friend and title rival Patricio O’Ward. But Álex Palou is the one that lifted the Astor Challenge Cup aloft in celebration as IndyCar’s newest champion.

As has been said of many IndyCar drivers this year, ‘Formula 1’s loss is IndyCar’s gain’. That is certainly true of Palou, who is no longer slipping under the motorsport radar.