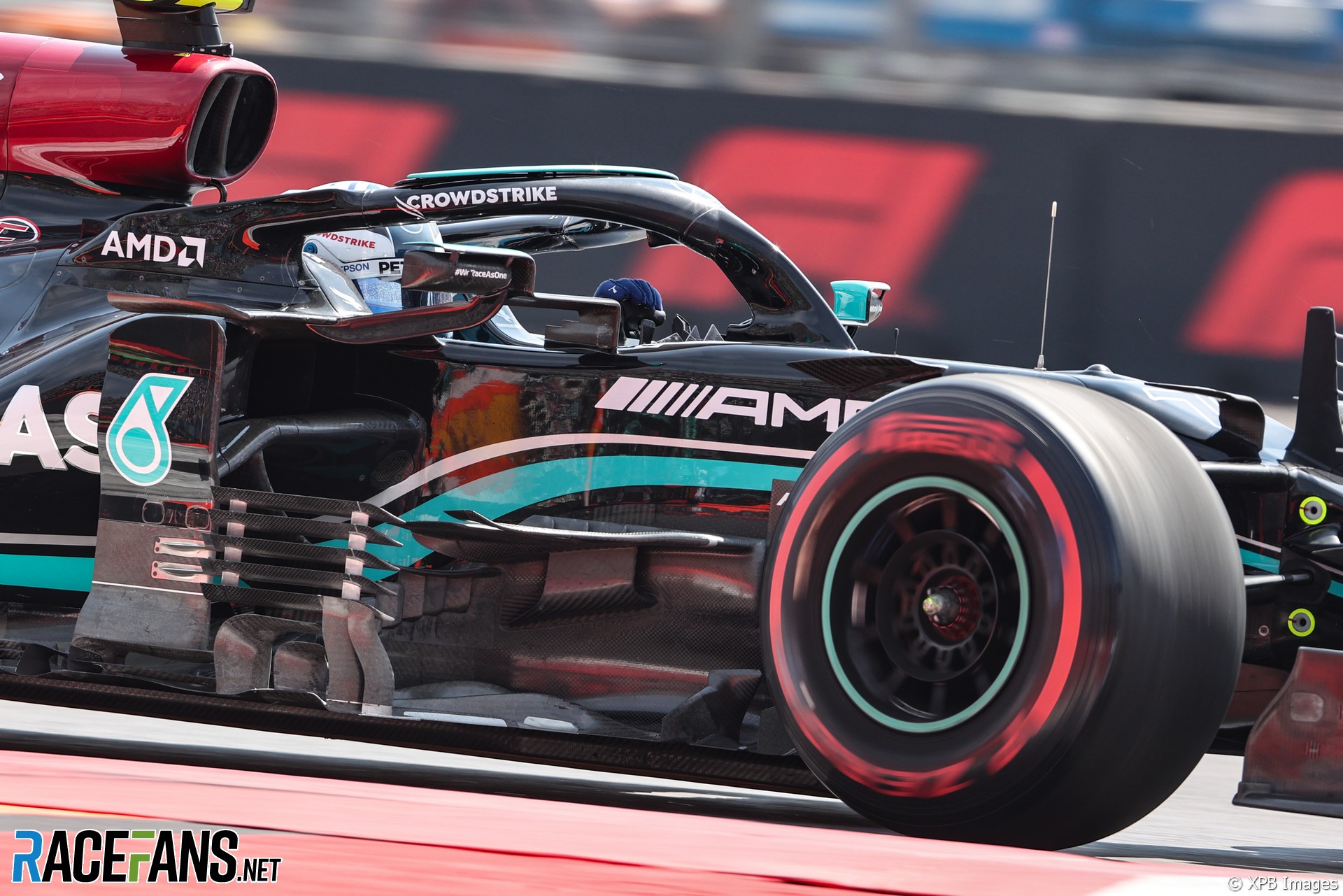 Red Bull set an ominous pace for their rivals in final practice, ahead by six tenths of a second. But Mercedes struck back in qualifying, locking out the front row of the grid.

The track warmed up between final practice and qualifying, reaching 21C ambient temperature, and nearly 45C on the track surface. Several teams opted similar tactics to those seen at Monza, sending their cars out in pairs, allowing them the chance to try and have one slipstream off the other along the long, 1.2 kilometre front stretch.

The session was red flagged with just under 11 minutes left, after a heavy crash for Lance Stroll at the Peraltada (turn 17). Stroll was well off the racing line in the dusty, oily surface. He spun off and impacted the TecPro barriers with the rear of his car.

The Aston Martin driver was able to exit his car uninjured, but would take no further part in qualifying. The damage to his car will raise concern over the state of his brand-new power unit going into tomorrow’s race.

Q1 resumed at 14:33 local time, after over 25 minutes for repairs to the Tecpro barriers at turn 17. On his first attack lap, Max Verstappen set a 1’16.788, the first driver to break the 1’17 second barrier for the weekend. Valtteri Bottas finished as the fastest driver of the session, however, setting a 1’16.727 in his Mercedes.

Fernando Alonso, Nicholas Latifi, and the two Haas-Ferraris of Mick Schumacher and Nikita Mazepin joined Stroll in the group of five drivers that missed the cut to advance into Q2.

AlphaTauri gave Yuki Tsunoda the initiative to go for glory on a set of soft compound tyres, setting a time that was just two-tenths slower than Verstappen and Hamilton. The strategy raised some eyebrows as Tsunoda is already guaranteed to start from the back due to power unit element changes, and the move ensure he will have to start on old tyres.

However AlphaTauri weren’t the only team to take a penalised driver into Q3. McLaren did the same with Lando Norris, giving them the opportunity to use him to give Daniel Ricciardo a slipstream in Q3.

Hamilton edged back ahead of Verstappen with a 1’16.474, the Mercedes seemingly happier on the medium rubber. Seconds later, Antonio Giovinazzi spun off in turn 12 at the Foro Sol complex, and brought out a yellow flag. Hamilton, Verstappen, and Tsunoda finished in that order in the top three; only Tsunoda advanced to Q3 on soft compound tyres.

Past world champions Sebastian Vettel and Kimi Raikkonen missed the cut to advance to Q3. George Russell, who along with his team mate is under investigation for cutting the queue at the exit of pit lane after the red flag in Q1, was also eliminated. Giovinazzi joined him, spinning off at the end, as did Esteban Ocon, who will join those starting at the back of the grid due to power unit penalties.

Red Bull, Mercedes, Ferrari, McLaren, and AlphaTauri got each of their two cars into Q3, though Norris and Tsunoda will start from the rear of the field due to power unit element changes.

The first set of flying laps came in a flurry, and in a reversal of the form book from earlier this weekend, Bottas was the first driver to crack the one minute 16 second barrier with a lap of 1’15.875, with Hamilton less than two tenths behind him, and Verstappen in third, another two tenths behind Hamilton and struggling to put heat into his rear tyres.

Having encountered DRS problems during final practice, new strips of tape appeared on the Red Bull’s rear wings during qualifying. It coincided with a deterioration in their performance.

“It’s still not good mate,” Verstappen reported after his first Q3 run. “Just sliding the rear. All the time at low speed just losing the rear, But my tyres are too cold at the start of the lap, the rears.”

Bottas set a fastest outright first sector on his last lap, but could not improve on his time. But neither could Hamilton, and crucially, neither could the Red Bulls of Verstappen and Perez, and that lap of 1’15.875 was enough to secure Bottas his 19th pole position, ahead of Hamilton on an all-Mercedes front row.

Verstappen qualified third after being caught behind his team mate Perez, who went off at the Esses after Tsunoda went off and kicked up a cloud of dust behind him. Perez will start fourth.

“Oh for fuck’s sake what the fuck happened there in front of me,” fumed Verstappen on his radio. “Unbelievable,” he added. “Such a dumb idiot.”

Pierre Gasly was able to secure ‘best of the rest’ honours in fifth, ahead of Carlos Sainz Jnr in sixth, Daniel Ricciardo in seventh, and Leclerc in eighth. With Tsunoda and Norris moving to the back of the grid, Vettel will move up to ninth on the grid with a free selection of tyres for the start of the race.