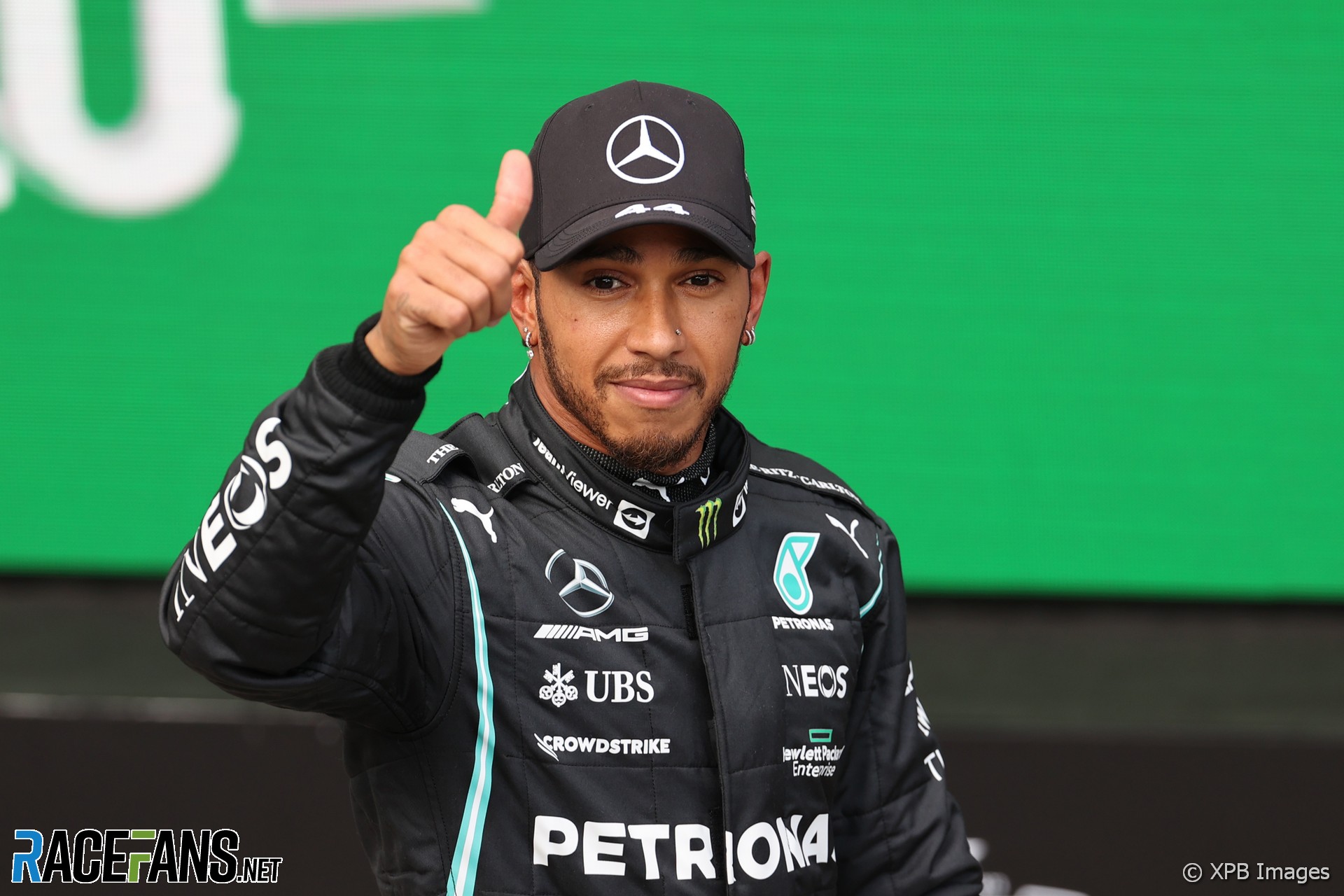 Lewis Hamilton set the fastest time in qualifying for the São Paulo Grand Prix at Interlagos, giving him the pole position for Saturday’s sprint qualifying race ahead of championship leader Max Verstappen.

Qualifying began at 16:00 local time, under cloudy skies, with cooler conditions than in the afternoon’s practice session. Charles Leclerc, in his Ferrari, was the first driver out on track.

After eight minutes, Lewis Hamilton broke into the one minute, eight second range in his Mercedes with a lap of 1’08.824, moving ahead of Max Verstappen’s Red Bull-Honda. Carlos Sainz Jnr slotted into second at the end of the first set of attack laps.

Hamilton improved to a 1’08.733, and Valtteri Bottas moved up to third. Charles Leclerc ran afoul of the track limits at the exit of Descida do Lago (turn four) on his first run, but eventually got up to third ahead of Bottas and behind his team mate Sainz.

Antonio Giovinazzi and Esteban Ocon escaped relegation after the chequered flag, pushing Lance Stroll’s Aston Martin-Mercedes to the wrong side of the Q1 cut line.

Nicholas Latifi out-qualified George Russell for the first time since the pair became team mates at the beginning of last year. That ended Russell’s undefeated run in qualifying at Williams after nearly three seasons. Latifi qualified 17th, Russell 18th, and then the two Haas-Ferraris of Mick Schumacher and Nikita Mazepin were 19th and 20th, respectively. Schumacher had a best lap of 1’09.958 deleted due to track limits, which would have put him five-thousandths away from Russell, and even further ahead of Mazepin.

It took three minutes for cars to make their way out on track for the second phase of qualifying. Due to this being a sprint qualifying weekend, drivers did not have to factor starting tyre choice for the race into their Q2 strategy, as all will have a free selection this weekend.

Hamilton’s first flying lap, a 1’08.659, was deleted after he breached track limits at Descida do Lago; seconds later, Verstappen went to the top of the board with a 1’08.567. But on his second lap, Hamilton remained inside the boundary lines, and shot back to the top with a 1’08.386.

With five minutes remaining and a break in the Q2 action, the five drivers sitting on the wrong end of the cut line were Ocon, Yuki Tsunoda, Sebastian Vettel, and the two Alfa Romeo-Ferraris of Giovinazzi and Kimi Raikkönen. All 15 drivers came back out for their final attack laps to try and secure a place in Q3.

Lando Norris went from 11th to seventh on his last lap, bumping Ocon down to 11th. Vettel was able to improve, but not enough to advance into Q3, as he finished ahead of Tsunoda (who locked up into the first corner on his last lap), Raikkönen, and Giovinazzi. Fernando Alonso was safe by less than six-hundreths of a second as he held on to tenth.

Hamilton improved to a 1’08.068 on his last lap to secure the top spot in the session, ahead of Bottas and Verstappen.

That left the two Mercedes, the two Red Bulls, the two Ferraris, the two McLaren-Mercedes (who didn’t use the soft tyre in practice), plus Alonso and Pierre Gasly, to fight for pole in Q3.

Hamilton set the pace in the first set of flying laps, turning in a 1’08.107 to take provisional pole. Bottas set a 1’08.469 in the other Mercedes, and Verstappen could only split the two Mercedes with a time of 1’08.372, as he spoke of his tyres overheating on the radio.

Perez, a half second slower than Verstappen on his first run, was also searching for a bit more lap time as the second and final time attacks began.

Verstappen could not improve on his final flying lap after going way wide at the exit of Junção (turn 12), he also lost top speed with his DRS oscillating down the main straight. But Hamilton was able to find more pace for one last lap: His lap time of 1’07.934 got a roar of applause from the Brazilian crowd, and secured him the number one grid position for tomorrow’s 24-lap Sprint race.

Hamilton’s five place grid drop for a change of internal combustion engines will not be applied until Sunday’s feature race.

Bottas held onto third place on the Sprint grid, just 0.014 seconds ahead of Perez, who finished fourth in Q3.

The Honda-powered AlphaTauri of Gasly was fifth, the best of the rest ahead of Sainz in sixth and Leclerc in seventh. Norris, Ricciardo, and Alonso completed the top ten in that order.