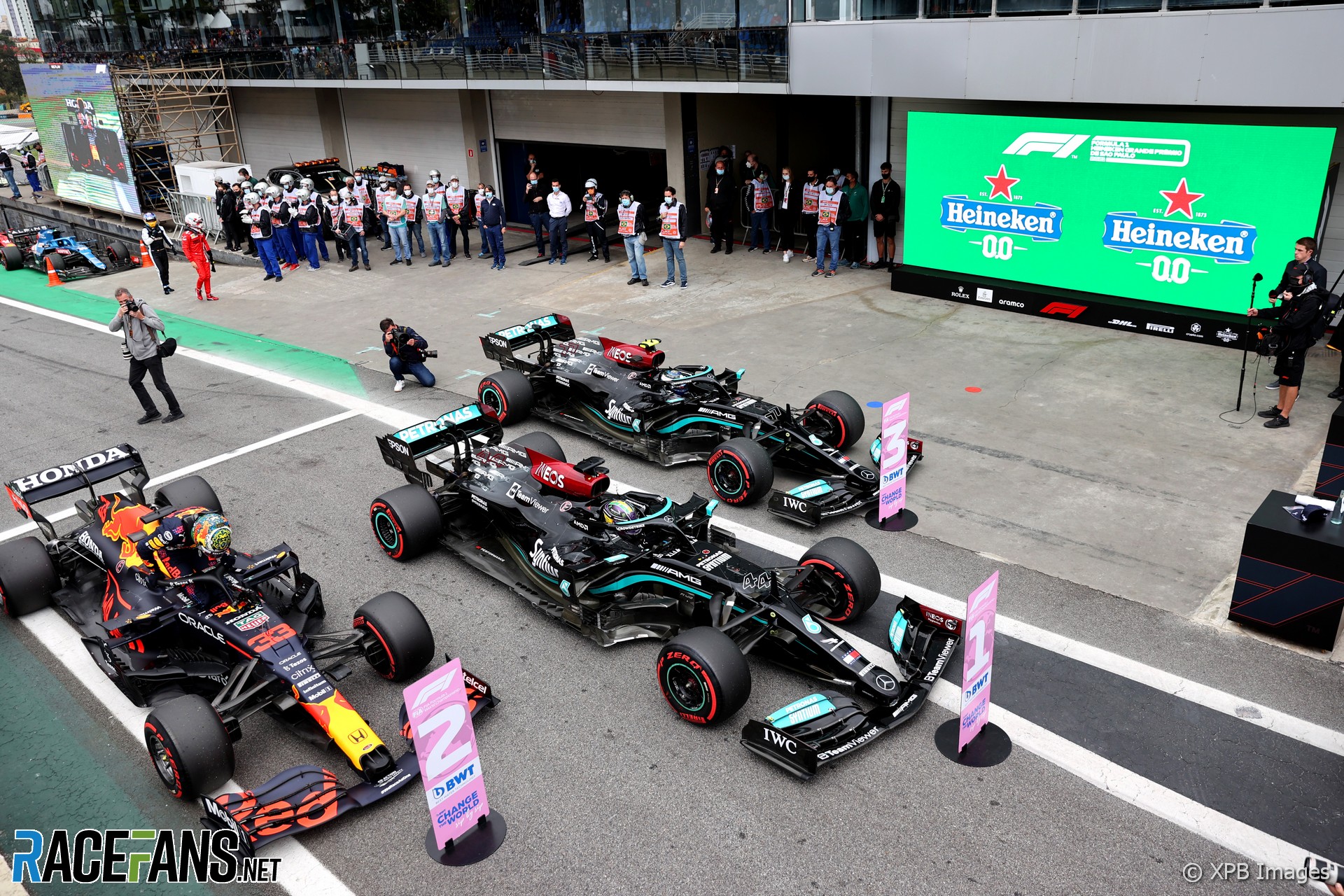 [raceweekendpromotion]Max Verstappen stormed into the lead from third on the grid last weekend at the Autodromo Hermanos Rodriguez, to the dismay of pole-winner Valtteri Bottas.

He has a chance to make amends in today’s sprint qualifying race as the outcome of the stewards’ investigation into his team mate’s car has finally been announced. Having qualified on pole, Hamilton will start from the back. Verstappen therefore claims the top spot, and Bottas will join him on the front row.

It’s a short run to the first corner at Interlagos, and Bottas knows Verstappen has no need to fight him hard. The Red Bull driver’s undoubted priority is to maximise his points haul against Hamilton, who now has to climb from the back of the grid to grab the best possible starting position for tomorrow’s race. Not forgetting the smaller matter of his five-place engine change penalty, which will move him back five places further on the grid for Sunday’s grand prix.

Hamilton was fastest by a significant margin, around three and a half tenths of a second of qualifying, in each session. But it remains to be seen whether his W12 will be as quick once Mercedes have rectified the DRS problem which led to his disqualification from the results of qualifying.

As previously, drivers have a free choice of tyres for the 24-lap encounter. Temperatures at the track have risen sharply since yesterday’s qualifying session, and Fernando Alonso was the surprise name at the top of the times in final practice.

Curiously, both Alpine and McLaren opted not to use any soft tyres during the first practice hour, reserving unused sets for Saturday. Every team ran the soft rubber in the final hour, but Pirelli suspect they may prefer harder tyres for the sprint qualifying race.

“For the sprint qualifying, in my opinion, we use the medium compound,” said Pirelli’s head of F1 and car racing Mario Isola. “The soft is use-able in terms of laps wear, but probably slower over the distance of the sprint qualifying, even if they don’t start the race with a full tank because it’s a shorter race.

“We experienced a bit of abrasion in [Friday] morning, but the soft tyre honestly was working better than expected. Probably it was hampered by the poor conditions.”

Pirelli were one of the suppliers and teams affected by delays in freight arrival from Mexico City, leaving them with less information about the track surface than usual. “Unfortunately, due to the delay of the freight we haven’t been able to measure the track roughness because our kit, our laser, was in the freight that was delayed, so we had no opportunity to measure the roughness, as we usually do on Wednesday,” explained Isola.

“The level of grip looks like the circuit is very similar to what we had in 2019, but I don’t have a number to confirm that,” said Christian Horner, confirming what Isola had said. Despite the track being visibly dusty during first practice, teams didn’t seem to be struggling for grip in the same way that they had at last week’s Mexico City Grand Prix.

Track evolution can be quite high at Interlagos and is strongly influenced by the often extreme fluctuations in weather and temperature. First practice had a strange mix of conditions with track temperatures starting relatively high at 37C but falling to less than 25C during the course of qualifying sessions, under cloud cover. Several drivers reported drizzle during first practice, although none seemed especially affected by it as lap times continued to improve on slick tyres.

Ahead of the weekend, Mercedes’ chief trackside engineer Andrew Shovlin predicted cooler conditions would play in their favour in their fight with Red Bull. That was backed up by Mercedes’ performance (regardless of Hamilton’s dramas, Bottas having beaten Sergio Perez) and Verstappen, who said after qualifying that Sunday’s conditions were likely to tip the balance.

“It will be completely different,” Verstappen said, “it’s going to be a lot warmer, so that will change the behaviour of the car.” That points to Red Bull enjoying a more comfortable weekend than Friday indicated.

Before the news broke that Hamilton’s car had failed a technical inspection, Horner’s priority for the sprint qualifying race was for Verstappen to finish ahead of Bottas. “I think that if we don’t win the sprint race it’s not the end of the world as long as we’re second,” he said. “The most important thing is to beat Valtteri tomorrow.”

Hamilton’s disappearance from pole position changes that calculation. Beating Bottas is now a preference; banking a potentially huge points swing against Hamilton at this stage in the championship is the priority.