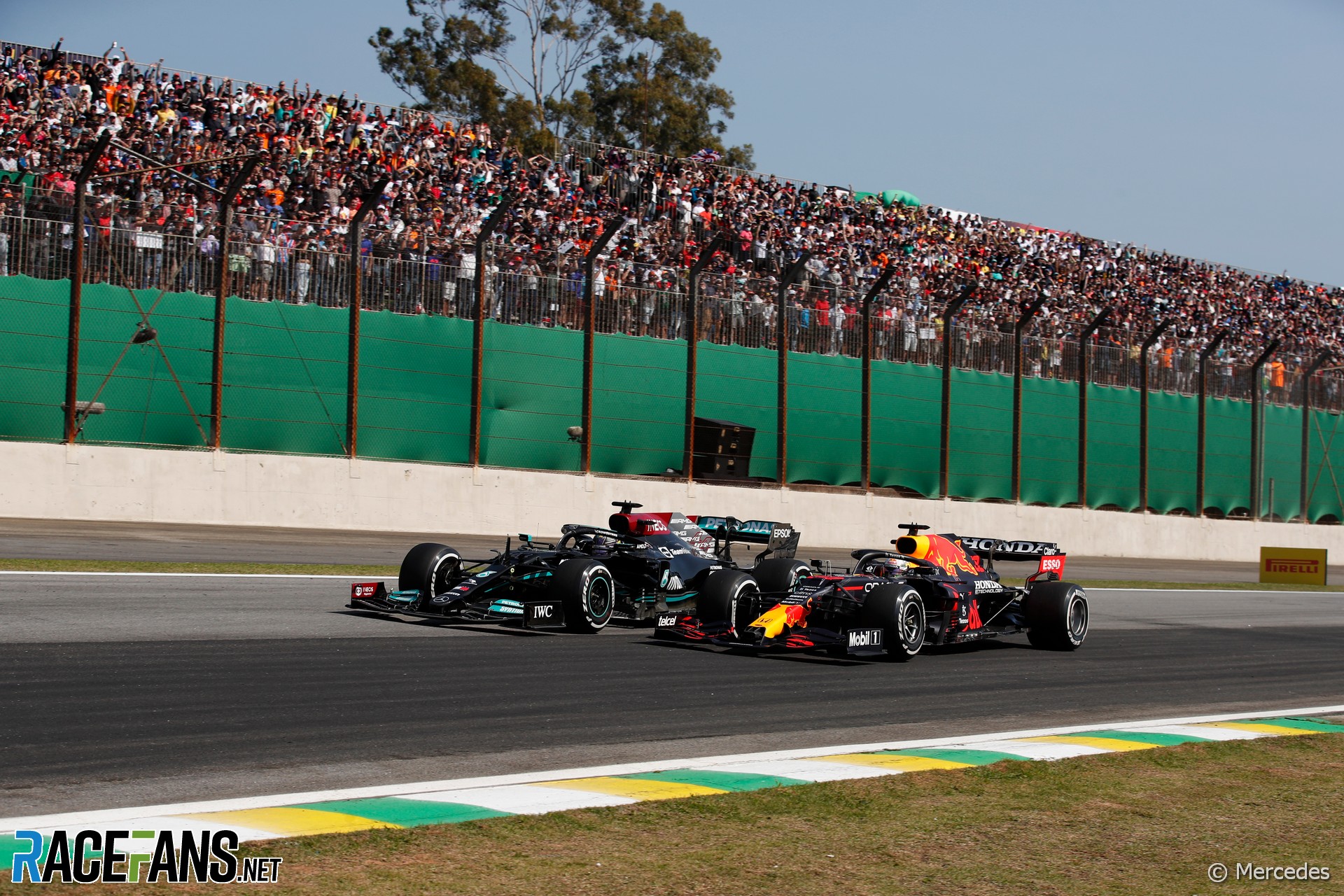 [raceweekendpromotion]The stewards decided not to investigate an incident between Max Verstappen and Lewis Hamilton on lap 48 of the Sao Paulo Grand Prix. Should they have taken a look at it, and did the Red Bull driver deserve a penalty?

Verstappen took the lead of the Sao Paulo Grand Prix having passed Valtteri Bottas on the opening lap. Starting from tenth position, Hamilton made his way up to fourth place, before team mate Bottas allowed him through into third.

A Safety Car for debris on the circuit allowed Hamilton to close the gap to the Red Bulls ahead and later passed Sergio Perez to move into second after the restart.

As the pair exited the Curva do Sol, Hamilton used the DRS zone in the first sector to slipstream alongside Verstappen to the outside on the approach to Descida do Lago. As they went approached the left-hander Hamilton moved ahead, but when they turned into the corner both Verstappen and Hamilton ran wide and onto the asphalt run-off, before rejoining the circuit with Verstappen still in the lead.

How it happened – original footage

How it happened – Verstappen’s view

Verstappen and Hamilton were both relatively quiet over team radio after the incident. Verstappen did not acknowledge the near-miss, simply asking engineer Gianpiero Lambiase to keep him informed about the gap to Hamilton.

Hamilton said nothing following the incident. When informed by race engineer Peter Bonnington “that incident is under investigation”, Hamilton responded “yeah, it was crazy.”

Red Bull sporting director Jonathan Wheatley argued to race director Michael Masi that there was no need to investigate the incident.

“Michael, that is all about ‘let them race,'” Wheatley told Masi. “Yep, no problems, that’s fine,” Masi replied. “We’re just having a look at it, Jonathan. There is nothing further in that. Thank you for your input.”

When the stewards confirmed that there would be no investigation into the incident, Mercedes sporting director Ron Meadows disagreed.

“So, crowding off track and gaining an unfair advantage and no investigation necessary?” he questioned Masi.

“Ron, having looked at it all completely,” Masi responded, “it was one of those – and obviously we’ve had a good look at it, that’s why we’ve gone with no investigation.”

Hamilton was informed by Bonnington that Verstappen would not be investigated. “So, Lewis, apparently no investigation necessary for running you off track” Bonnington said. “Of course, man, of course” replied Hamilton, sounding unimpressed.

Lewis Hamilton said that he was not surprised to learn during the race that the incident would not be investigated.

“When they said they were going to investigate, I just knew that that’s the decision they would come to – whether it was right or wrong,” said Hamilton.

“I need to go and look back at it. But I mean, it’s a racing incident in the end and it probably doesn’t really matter.”

Max Verstappen said he believed the fact that neither he nor Hamilton stayed on circuit was a natural consequence of the hard racing between the pair.

“We both of course, tried to be ahead into the corner, and so I braked a bit later to try and keep the position and the tyres were already a bit worn,” Verstappen said.

“So, I was really on the edge of grip, so that’s why I think I was already not fully on the apex. And it’s a safer way, of just running a bit wide there.”

The stewards noted the incident, but determined that no investigation into a possible penalty was necessary.

Should Verstappen have been penalised for the incident? Cast your vote below and have your say in the comments.

Do you agree the stewards were right not to penalise Verstappen for the incident with Hamilton?

150 comments on “Did the stewards take the correct decision over Hamilton and Verstappen at turn four?”