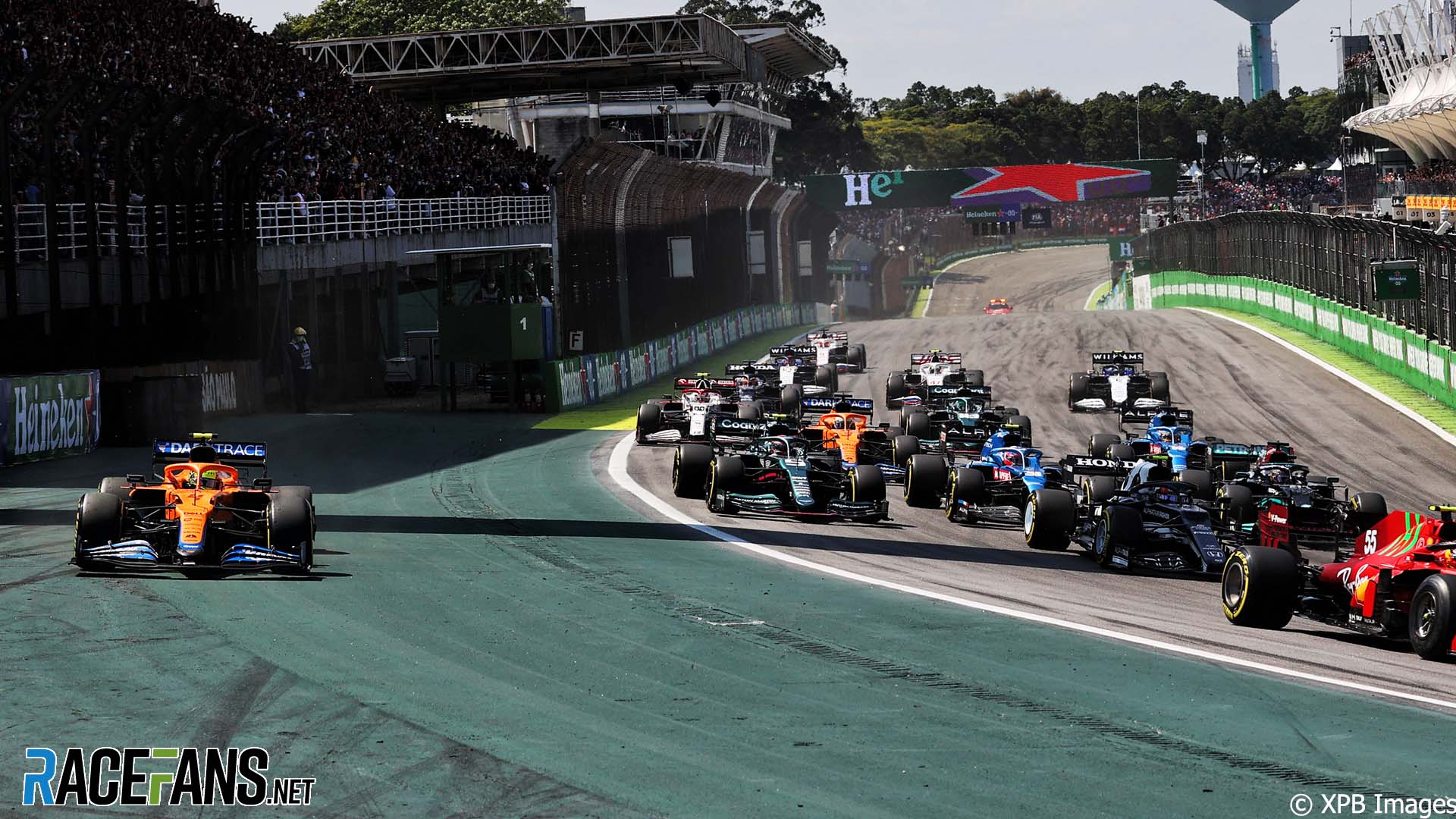 Lando Norris said that a collision with Carlos Sainz at the start of the Sao Paulo Grand Prix had advantaged Ferrari in their points battle.

[raceweekendpromotion]Norris got a good start from fifth and was able to run to the outside and past third place Sainz. However, the two collided before Norris had fully passed Sainz, into turn one, leaving Norris with a left rear puncture that he had to nurse back to the pits, starting lap two dead last and more than 37 seconds down from 19th-placed Kimi Raikkonen.

Norris said that there was “not really” anything more he could have done to avoid the Ferrari. “I mean, I had to start turning left for the corner and the guy on the inside also knows that, so you have to respect each other, right?

“And if I’m a bit on the right side, I’m going to be coming back on at some point and obviously it benefited them a lot more than us, in the long term,” he continued. “I don’t know what else I’m meant to do.”

“I’ve gone to the right, there was a gap, I had a much better start – miles better start – and I can’t just keep looking in my mirrors the whole time, and I can’t see it from above where I am, so I put my car in the best place I thought I could,” Norris explained. “I don’t want to crash so I thought I would need space, but it wasn’t enough.”

The incident was ruled as not requiring an investigation by the stewards. Norris drove back to finish the Sao Paulo Grand Prix in tenth, but with team mate Daniel Ricciardo’s retirement, McLaren’s result gave Ferrari a substantial points advantage in the two teams’ battle for third in the constructors’ championship.

“It’s frustrating, because I scored one point and could have scored quite a few more today,” Norris said. “Probably Ferrari was still quicker than us today but I would have been ahead of them at the start and they would have had to fight for it quite a bit, I reckon.”

Despite Ferrari’s overall advantage at Interlagos, Norris said McLaren “still had good pace” throughout the weekend. “We could have given a good battle throughout the whole stint, so yeah, it could have been a lot more today, but it wasn’t. So I guess that’s why I’m unhappy.”

Norris said that his second single-digit score in two races was not “helping out that much” given Ferrari’s fifth and sixth place finish. “Yeah, it’s better than nothing, so it might count in the end of the season, it might not. But we did our best.”

McLaren could expect better results at the final three races, Norris said. “I think there’s a few more tracks coming up, which I’m hoping will suit our car quite a bit more than here and the previous few races. But Ferrari are strong and, don’t get me wrong, they probably have a stronger package altogether at the moment.

“So we’ll keep pushing. We could have beaten them today, I think even when we didn’t have a car quite as quick, I’m sure there’s definitely more opportunities. It’s going to be difficult unless they make any big mistakes but we’ll try.”

19 comments on “Norris: lap one clash with Sainz “benefited them a lot more than us””