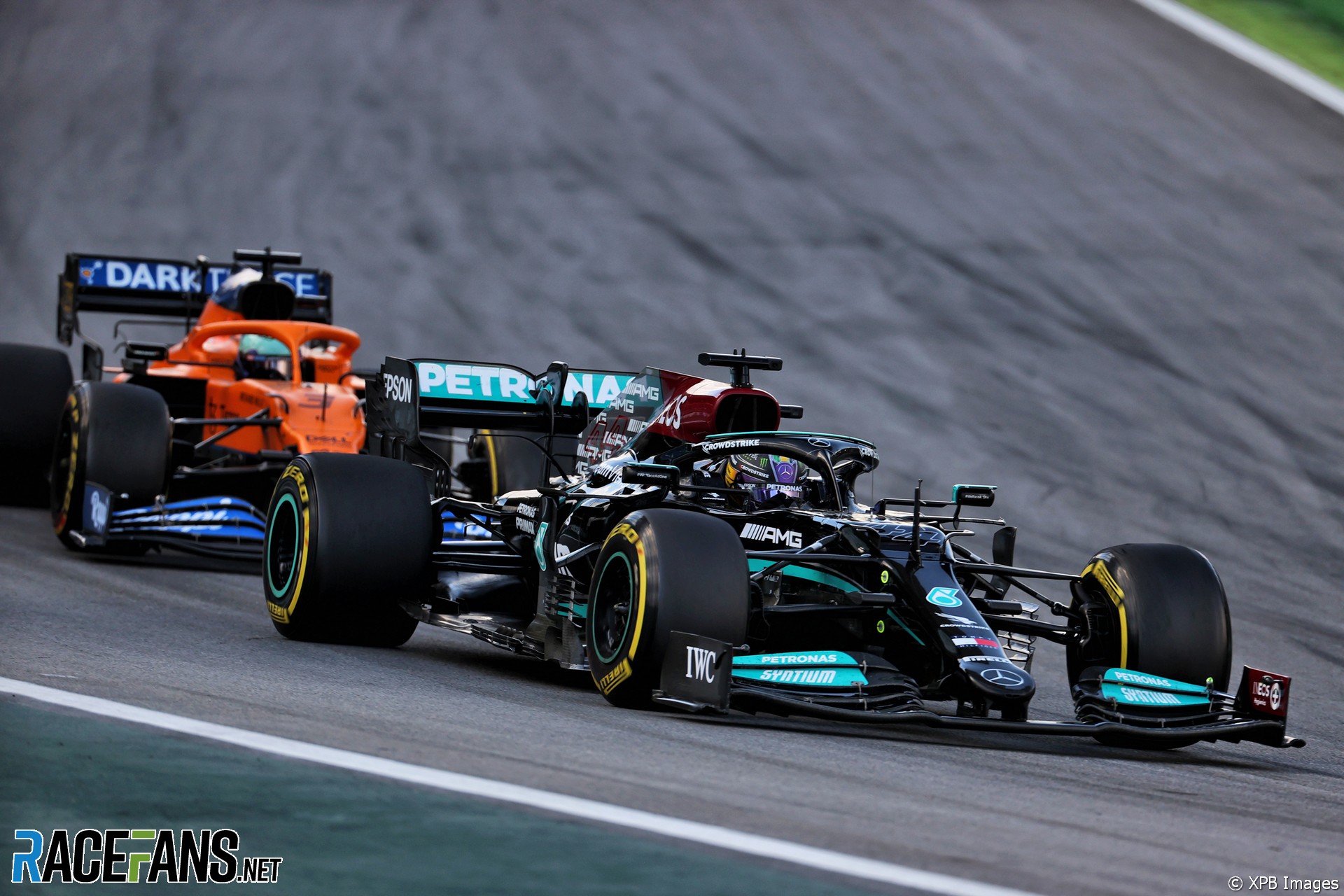 [raceweekendpromotion]Despite being disqualified from the results of qualifying and copping a five-place grid penalty for exceeding his allocation of power unit parts, Lewis Hamilton will line up 10th on the grid for the Brazilian Grand Prix.

As Formula 1 motorsport director Ross Brawn observed, the sprint qualifying format has boosted Hamilton’s chances this weekend. Had his rear wing failed the same test in qualifying at the Autodromo Hermanos Rodriguez last week, he would have started that race last.

Instead Hamilton was able to put his overtaking skills – not to mention that new Mercedes motor – to superb use as he hauled his way past 15 cars in Saturday’s sprint qualifying race. Vitally, for his chances of making it further in today’s grand prix, as well as making light work of the bottom half of the midfield, Hamilton got stuck into those ahead of him with little difficulty. He was barely fazed by the straight-line speed of the McLarens, something that hasn’t always been the case when he or Valtteri Bottas has been relegated down the grid. One major difference between Hamilton and several of his on-track rivals was at the crucial Juncao corner which sets up DRS-assisted overtakes into turn one.

Hamilton himself hadn’t anticipated how successful his recovery drive would be having stressed the difficulties of passing at Interlagos before the weekend began. But given the pace he showed it seems clear that, starting 10 places higher for a race almost three times as long as sprint qualifying, Hamilton can’t be discounted from taking a podium finish or even victory today.

Several factors played a role with Hamilton’s rise up the order, not least of which was the gamble of some drivers to use soft tyres, in order to have a starting advantage. Although that proved the correct tyre choice for many – not least Hamilton’s victorious team mate – it meant he was able to take advantage of some drivers whose soft rubber began to fade towards the end.

Moreover, as the race wore on and Hamilton moved further into the top 10, drivers that might have otherwise had a reason to defend harder against him were incentivised to let him through relatively easily in order to save their own tyres to the end, knowing that they would likely regain the place on Sunday’s grid due to Hamilton’s five-place penalty. That won’t apply in the race, so Hamilton can expect a harder fight. Norris admitted he put up little resistance when Hamilton threw his car down the inside at turn one on the final lap.

Another factor which could work against Hamilton is rising temperatures at Interlagos. The grand prix is forecast to be considerably hotter than sprint qualifying, with track temperatures of up to 53C predicted. That will make for some of the hottest conditions all weekend: final practice reached 57C track temperature while on Friday qualifying it fell to 24C at times. The soft tyres may not be quite as quick or last as long today.

As yesterday, drivers have a free choice of starting tyre. Bottas used his soft tyre advantage to take the lead off pole-winner Max Verstappen at the start. That leaves Verstappen starting this afternoon’s race off-line, as does his team mate. For both the temptation to start on softs and win the race to turn one will be strong, if they believe the rubber will last long enough to make a one-stop strategy viable. But Verstappen will surely keep his eye on the big picture, which is staying in front of Hamilton, and do whatever the team decide best meets that objective.

How quickly the front-runners pull away will be crucial to Hamilton’s chances today. Both Red Bull drivers had to fight Ferraris to regain places yesterday. Verstappen was able to pass Sainz relatively early on and manage to stay with Bottas at the front of the race. But within 24 laps Perez was 19 seconds back from Bottas and Verstappen, stuck behind Sainz.

A key factor which could prevent Hamilton troubling leaders is if they are able to pull far enough ahead to make a pit stop and come out ahead of him. This has parallels to the Turkish Grand Prix, where Hamilton took his previous engine change penalty: The instant Verstappen had the necessary gap over Hamilton, Red Bull brought him in.

The final obstacle to victory Hamilton could face is likely to be the easiest of all. If Bottas keeps his lead, and is still there as his team mate moves into second place, a call from his team to move aside is inevitable.

If sprint qualifying does nothing more than extend a grand prix distance by a third, then Hamilton has used that extra running well, moving halfway the grid. But Verstappen retains the upper hand in the championship situation.

As things stand, Verstappen will leave Brazil with the championship destiny in his control, able to take the title even if Hamilton sweeps the remaining races. Whether that will still be the case by this evening rests partly on whether Hamilton can conjure up more of the magic we saw on Saturday.

Does Hamilton have a realistic chance of winning this race? Will anyone gamble on using soft tyres for the start?

Share your views on the Sao Paulo Grand Prix in the comments.