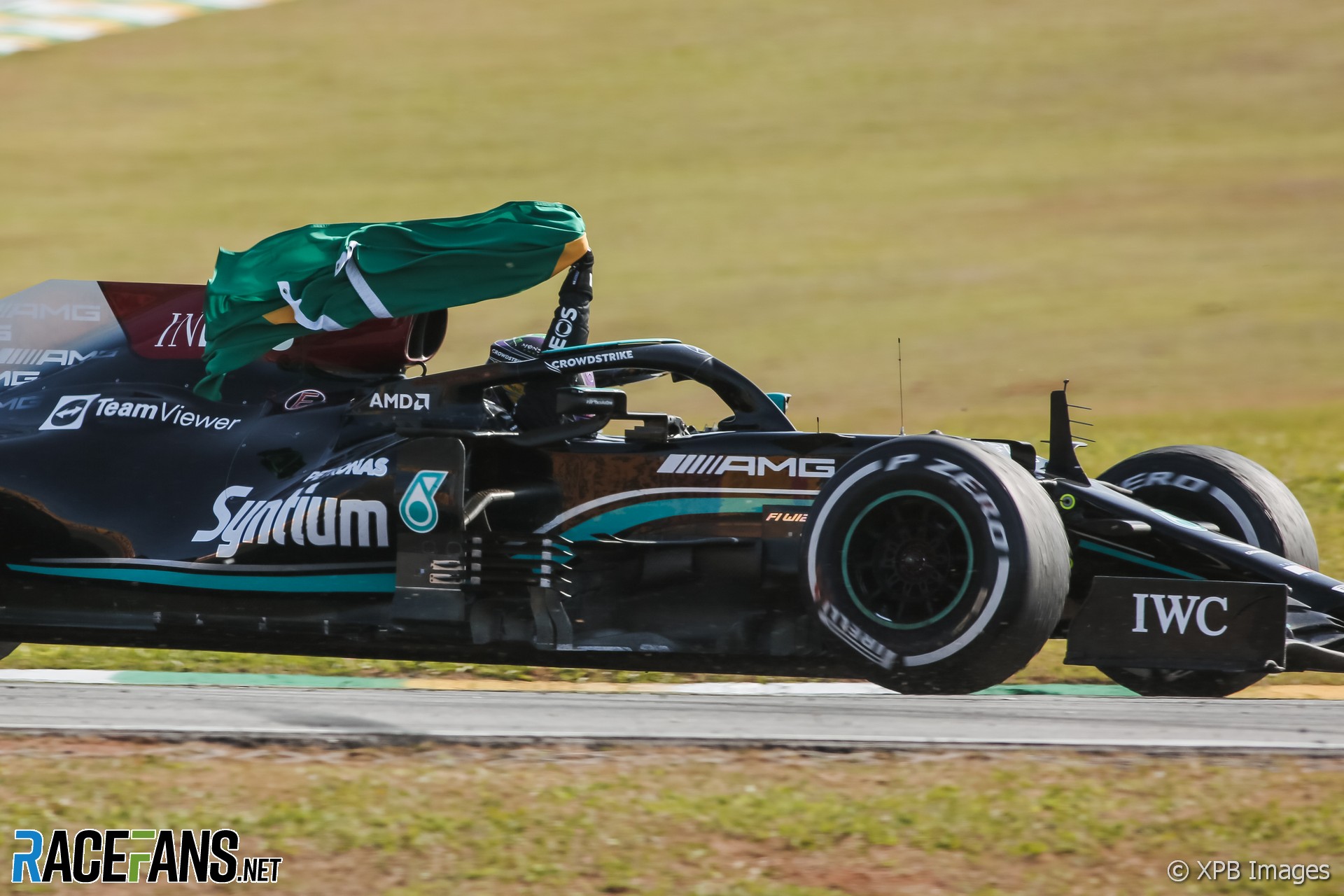 [raceweekendpromotion]Lewis Hamilton took the 101st victory of his career at Sao Paulo last weekend. Having started from 10th place, Hamilton now has the same number of wins as pole positions.

This is only the fifth time Hamilton has won after started behind the front two rows of the grid. It’s the second-lowest starting position Hamilton has won a race from: he previously took victory in the German Grand Prix from 14th on the grid.

He made a larger greater gain in positions during Saturday’s sprint qualifying race, rising 15 places from 20th to fifth. But that falls short of his personal best, a 19-place climb to third in the 2014 Hungarian Grand Prix, back when F1 still had 22-car fields.

That narrows his deficit to championship rival Max Verstappen to 14 points with three races remaining. To put that into perspective, last year Hamilton clinched the title with three races to go when he had a 110-point lead over Valtteri Bottas.

This is the closest the championship fight has been with three races to go since 2012, when Red Bull’s Sebastian Vettel led Fernando Alonso by 13 points. Vettel won the title by three points in a thrilling finale at Interlagos. An encouraging sign for Verstappen?

This was the third and final sprint qualifying race of the 2021 season and as with the previous three the top driver from the regular qualifying session on Friday didn’t end up on pole position for the grand prix, although penalties had a hand in that. Valtteri Bottas took the 20th pole position of his career, drawing level with 1996 world champion Damon Hill.

Red Bull pitted Sergio Perez for fresh tyres at the end of the race to secure the bonus point for fastest lap. He therefore took the sixth fastest lap of his career, putting him on a par with Jose Froilan Gonzalez, Mike Hawthorn, Phil Hill, Dan Gurney, Emerson Fittipaldi, Carlos Reutemann and Heinz-Harald Frentzen.

Ferrari out-scored McLaren for the fourth race in a row, in which time they’ve gone from trailling McLaren by 17.5 points to leading them by 31.5 points. The fight for third place in the constructors’ championship isn’t over but McLaren need a sudden change in fortunes to get back in the hunt.

Alpine and AlphaTauri went into the race level on points, scored points with three of their four cars, and left still tied, now on 112 each in their fight for fifth place.

Finally, Hamilton’s 101st victory means he has begun progress towards a second century of wins. Though it’s unlikely he’ll stick around long enough to achieve it.

Have you spotted any other interesting stats and facts from the Sao Paulo Grand Prix? Share them in the comments.