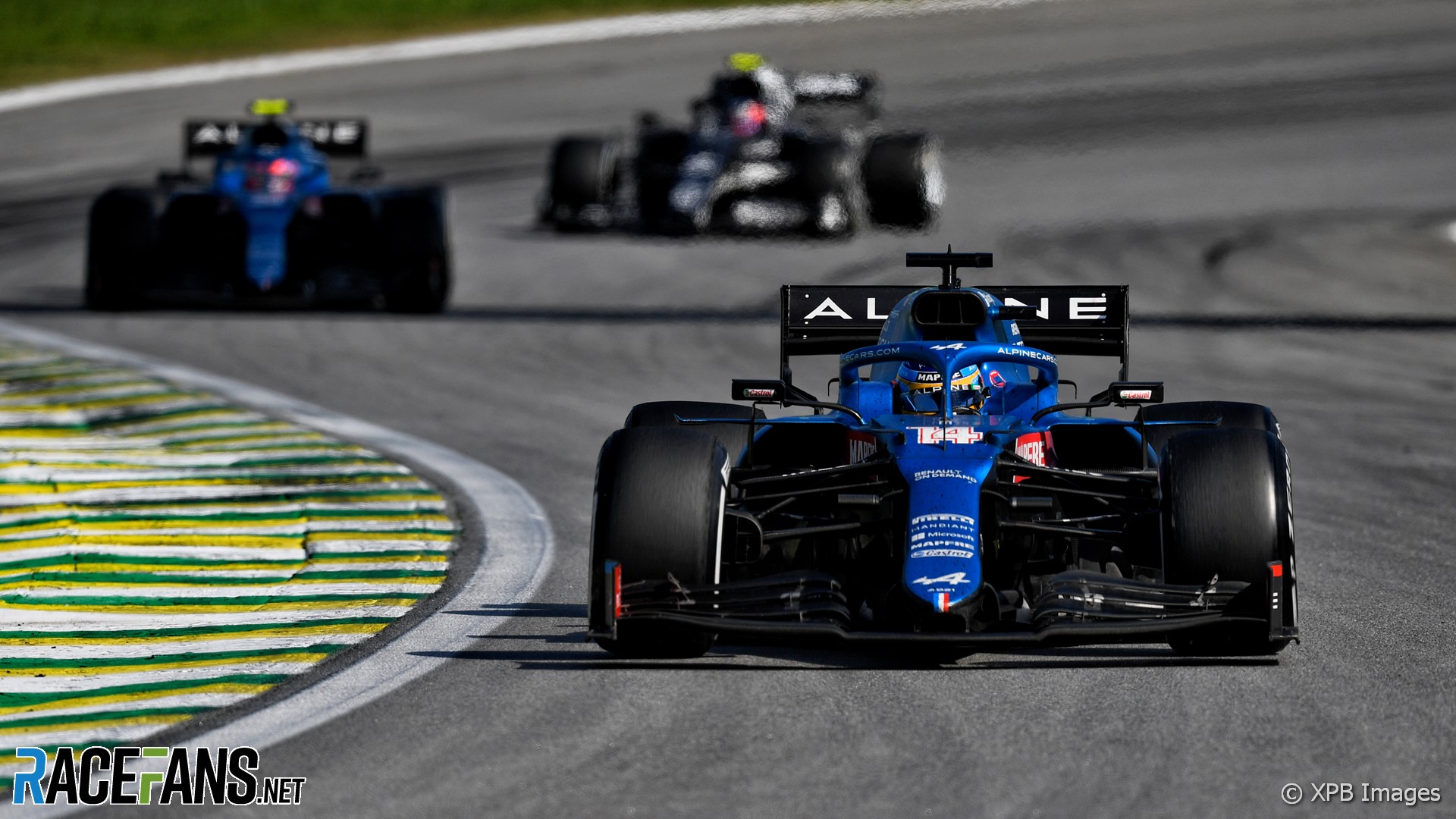 [raceweekendpromotion]While the duel between the title contenders was centre stage at Interlagos last weekend, an intense and strategic three-car battle raged behind them which was only caught in glimpses on television.

On one side was Alpine duo Fernando Alonso and Esteban Ocon, and on the other was AlphaTauri’s Pierre Gasly. The two teams were level on points coming into the race, and AlphaTauri seemed to have the faster package. However neither team had run on hard tyres prior to putting them on for the race start.

Rather than bank on a presumed advantage or deficit on the compound, Alpine opted to use both of their cars to focus purely on fighting Gasly. That meant no fighting with each other.

A clue to exactly how Alpine would deploy their two drivers came after the sprint qualifying race. Gasly, quickest of all bar the Mercedes and Red Bulls on Friday, slumped to eighth ahead of Ocon (ninth) and Alonso (12th).

“We’re tied for fifth [with AlphaTauri], and they had the edge on us yesterday, but today I think we have the edge on them,” Alpine’s sporting director Alan Permane said. “Pierre went backwards, we were being held up, Esteban felt with another couple of laps he’d been able to get past him.

“He’s got a lot more laps tomorrow to be able to do that. Both drivers said the car felt very good, very strong in the race. And we had a pretty decent showing in FP2. That wasn’t all show, it was homework for the sprint race. We’re feeling good for tomorrow.”

Permane said that Alpine “needed to score more points” than AlphaTauri on Sunday, but admitted he’d take a scenario where Gasly beat them but the combined scores of his drivers meant AlphaTauri wouldn’t move ahead in the standings.

Alpine’s strategy first became evident when Ocon pitted from sixth place on lap 30 of 71 as he made use of a Virtual Safety Car period. The team planned to double-stack the two cars, but Alonso didn’t follow Ocon in and instead pitted under green flag conditions four laps later.

As a result, both drivers dropped out of the points but were in a position where if they stuck to the one-stop strategy then Gasly could be threatened. Ocon’s engineer delivered the message first: “The goal is to keep Gasly in our pit window. If he stops he will come out behind us. His tyres are five laps older than yours.”

At this point Ocon had a few cars between himself and Alonso, who had to clear Sebastian Vettel and Gasly’s team mate Yuki Tsunoda. As Vettel laboured to pass a defensive Tsunoda, Alonso took advantage of his delay to pass the pair of them in succession.

“Not very clever from AlphaTauri,” remarked Vettel of his former team on his radio. “They’re fighting Alpine in the championship.”

Alonso’s progress improved the strategic picture for Alpine. Ocon was told to get Alonso into his own tow to bring him into pit stop range of Gasly too. It worked, because soon the gap between the Alpine drivers was reducing. Another message was delivered to Ocon:

With 20 laps to go, Gasly then made a second stop and dropped behind the Alpines, but their job wasn’t done yet against his fresher tyres.

“Swap places with Fernando when you can,” Ocon was told. “Gasly is five seconds behind, on a new hard tyre.”

Ocon slowed down significantly on the straight to turn four, allowing Alonso through. It was his turn now to tow around Ocon, but the dirty air was more difficult to navigate on older tyres and Ocon almost immediately slipped out of DRS range.

At first he asked for confirmation that the positions would be swapped back again at the end, which he got, but then radio channel was open again one sector later as Alonso pulled away.

The one-second barrier to Ocon was breached by Gasly on lap 55, four laps after he had pitted, but a lapped Haas actually brought Ocon out of DRS range of his pursuer at the crucial part of the circuit. It also brought him back into the slipstream of his team mate, and although Gasly was able to try the inside of turn one and the outside of turn four on lap 58, he was off-line.

His passing attempt was also frustrated by Alonso, who kept a close eye on his mirrors and deliberately handed Ocon a slipstream to briefly break away each time.

This continued until lap 60, which began with words of praise from the Alpine pit wall to Ocon, who moments later conceded eighth place as Gasly barged down the inside of turn one. However Alonso was still playing games and gave Ocon such a powerful slipstream on the run to turn four that only very late braking from Gasly kept him ahead.

Gasly cleared Alonso a lap later and, finally free of the A521s, unleashed his AlphaTauri’s pace to pull away by 16 seconds in the remaining 10 laps. Ocon consistently lost time to cooperating with blue flags but Alpine stuck to their promise of giving him the position back. Alonso gave up nearly nine seconds through the final sector of the last lap to let his team mate back through.

By finishing eighth and ninth, and with Gasly in seventh, it means the two teams remain level on points, Alpine still ahead by dint of their Hungarian Grand Prix win. “It’s been a mega team effort today,” Ocon gushed. “Everything that we’ve done in this race, the big fights all the way until the end.

“We pushed the team tactics to the ultimate limit, really. Unfortunately, it was just not enough to keep Gasly behind. But very positive race for both of us, and we’ve shown how far we want to keep that fifth place in the constructors alive with that race today.”