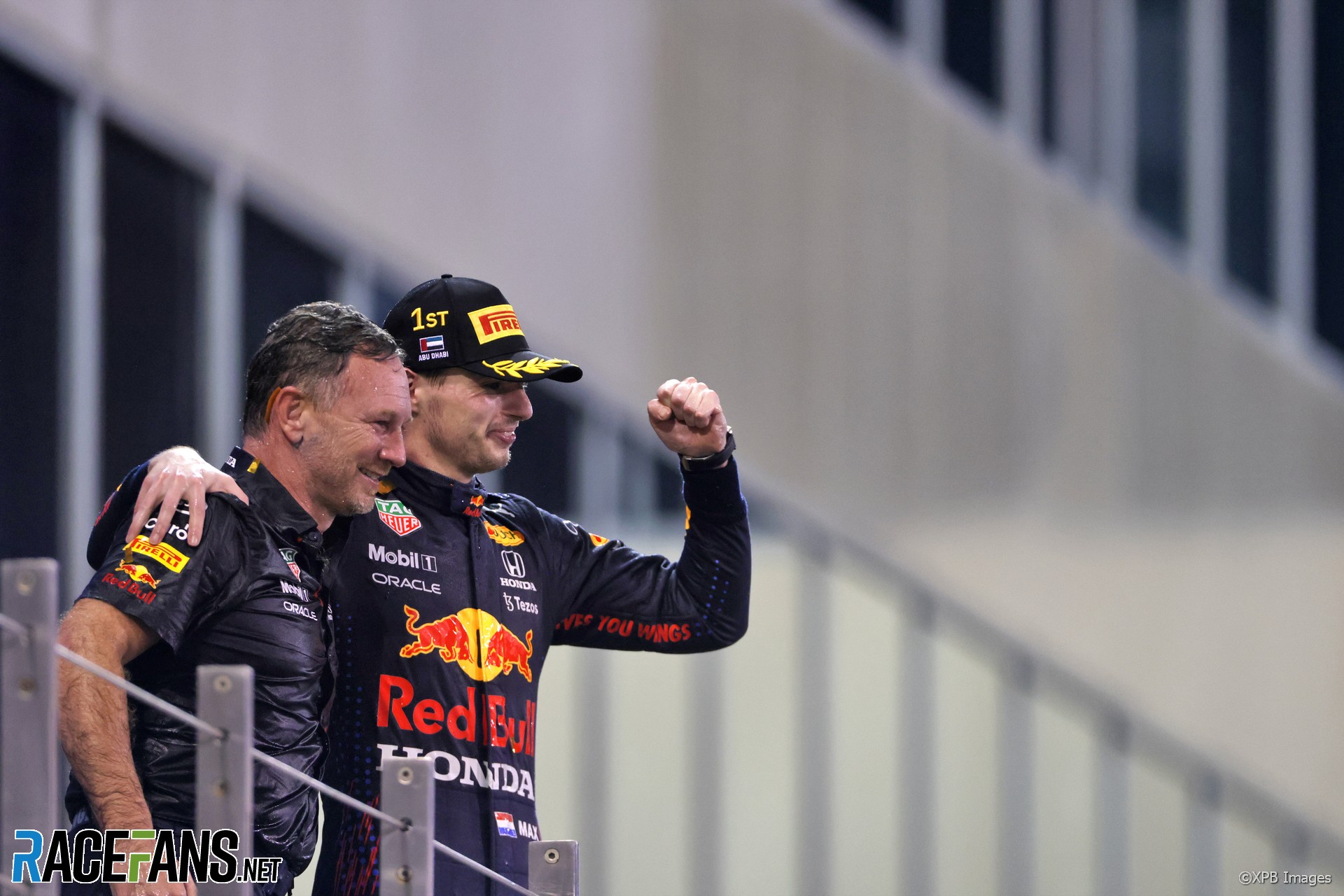 Red Bull team principal Christian Horner says he has had no indication from the FIA Max Verstappen will be unable to collect his Formula 1 drivers championship trophy at the governing body’s prizegiving ceremony tomorrow.

Rivals Mercedes gave notice of their intention to appeal over the controversial end to the Abu Dhabi Grand Prix. They have until tomorrow to decide either way.

“It’s very difficult for me to know what their position is,” said Horner after Verstappen return to the team’ factory to celebrate today. “From our perspective we’ve welcomed Max home to the team today as the world champion. And as far as we’re concerned, the situation is that obviously, we’re looking forward to seeing him pick up the trophy, hopefully, tomorrow evening as the world champion.'”

“I think the official period is until 7:00 o’clock tomorrow that the right of appeal exists,” Horner continued. However, he stressed: “Max Verstappen is the world champion. We’ve welcomed him home to Red Bull racing today, he’s seen all of the team and I think, really, it is time to move on.

“Hopefully he will receive the trophy tomorrow evening and be crowned as the world champion. I have no indication otherwise. I haven’t spoken with Mercedes or heard from Mercedes or the FIA to hear anything different at this point in time.”

Red Bull were not planning their own counter argument, currently, he said. “This is a dispute between the FIA and Mercedes. Of course, Red Bull is an interested party, so I would be represented accordingly. But this isn’t a dispute between Red Bull and Mercedes. Max won the race. He became the world champion and we’re incredibly proud of him. And that’s that’s where our focus is.”

Horner said there was contact between himself and Toto Wolff after the Abu Dhabi race. “Yes, I went to see Toto after the race, unfortunately he was unavailable, but I saw Ola Kallenius [chairman of the board of Daimler] who congratulated me and then Toto later in the evening did, as he sent to Max he sent me a text congratulating us on the drivers’ world championship.

“I congratulated him on winning the constructors world championship and reminded him that’s where the money is paid. Not the drivers. And that was it. I haven’t heard or spoken with him since.”

The call to restart the Abu Dhabi Grand Prix for a final lap, Horner said, felt like justice for Verstappen as “so many calls have gone against him this year. When you think Imola, a red flag, Lewis is in the gravel trap, he gets to restart the race in P2.

“You think to Silverstone, you think to Hungary, where we were obliterated from the race with both of our cars with Bottas, you think Azerbaijan, where a tyre explodes and he’s taken out of the lead of the race.

“Then obviously moments even in Abu Dhabi, right, where he took the lead of the race and Lewis the chicane at turn six and there was no penalty given. We felt that decisions have gone against us more often than not. And finally, a safety car caused by a Williams gave us an opportunity to throw something strategically at those last five laps and it paid off.”