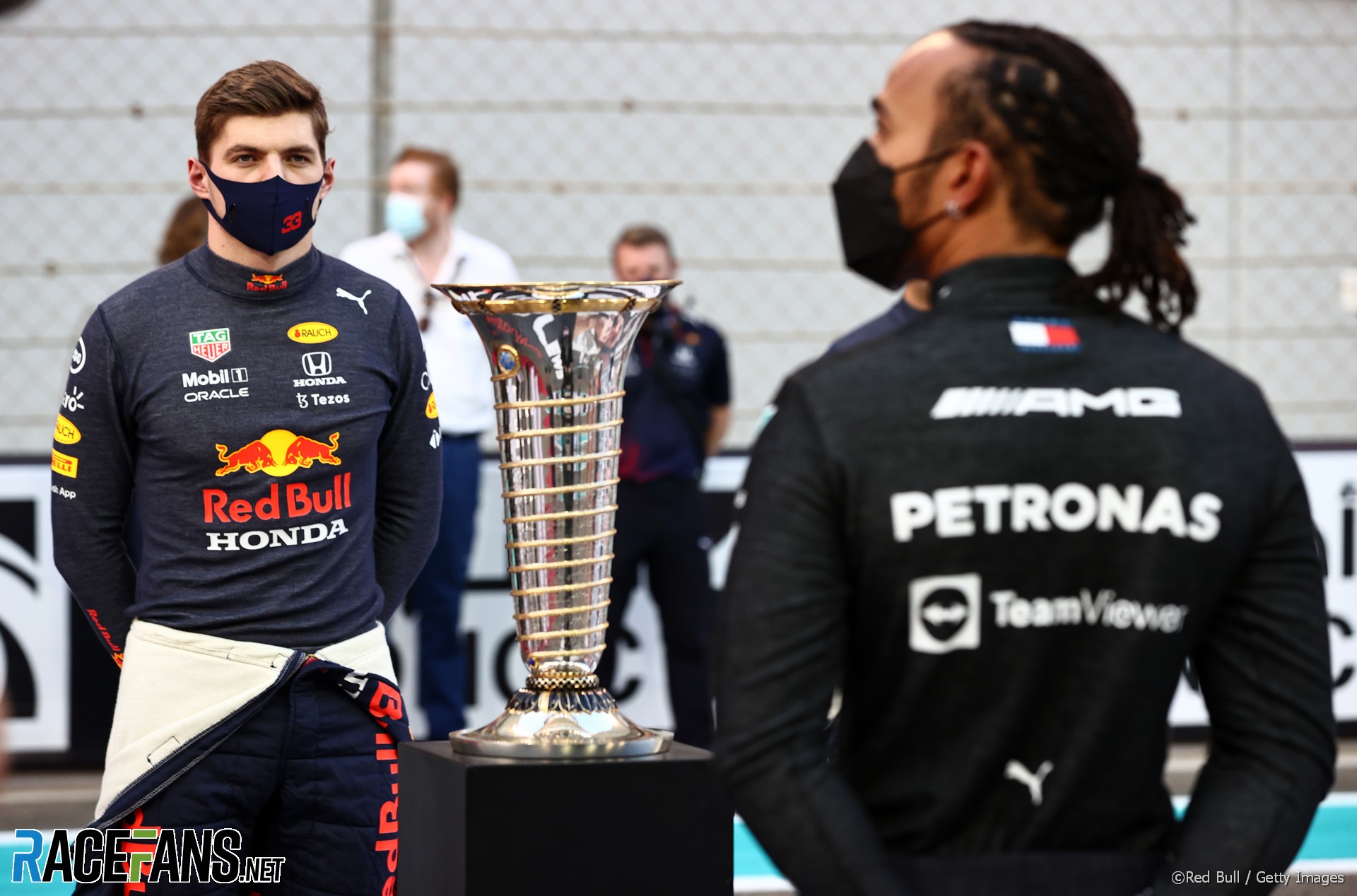 There was plenty of controversy during the 2021 Formula 1 season, starting well before the Abu Dhabi drama. From pre-season to that contentious finale, RaceFans readers had their say on the biggest talking points throughout the year.

At the start of the 2021 season, we asked you which drivers would win in the battles with their team mates. Some of the results were relatively predictable – Lewis Hamilton and Max Verstappen were never under any threat of being surpassed by Valtteri Bottas and Sergio Perez.

However two of the polls produced surprises. In among the most decisive outcomes, 85% of people thought McLaren newcomer Daniel Ricciardo would easily beat his relatively inexperienced team mate Lando Norris, while 86% tipped Charles Leclerc to prevail over incoming Ferrari signing Carlos Sainz Jnr.

But in the McLaren garage Ricciardo struggled, having to spend more than half the season adapting to the MCL35M. Although he took McLaren’s only win, it was Norris who beat him in qualifying, races, number of podiums and finished 45 points clear in the championship standings.

At Ferrari, Sainz was able to match and ultimately beat Leclerc. Although he only did it in the final race and by just five-and-a-half points, Sainz took four podiums to Leclerc’s one and was consistently competitive with him across the season, a key part of Ferrari sealing third place in the constructors against Sainz’s former team.

An equally decisive poll was that 80% of people expected Fernando Alonso to beat Esteban Ocon. He did, however, the two Alpine drivers ended the year just seven points apart and consecutive in the standings.

At the British Grand Prix F1 displayed an example of what cars could look like, according to interpreting the regulations for next season. We asked readers whether they thought it would be the change F1 needed to improve racing and aid overtaking.

Major aero tweaks and a completely different way of generating downforce are hoped to help drivers race closer, with cars expected to be slightly slower but much less affected by dirty air. In 2022 cars will get heavier and, due to the restrictive nature of the new regulations (and teams’ relative lack of time to creatively reinterpret them), may well look a lot more similar than they have.

Still, 27% of you strongly agreed that they would improve racing and 51% slightly agreed, putting 78% in favour of the changes after seeing the model.

One consequence of the new rules may be that F1 no longer needs to rely on the Drag Reduction System. The 2021 season marked the 10th anniversary of its introduction.

In April we asked you if F1 should move away from DRS. The verdict was clearly in favour: 66% of you strongly agreed that it should be done away with, with a further 16% slightly agreeing it should.

At the end of 2021, F1 has held 218 races with DRS. Whether the 18% of you who were neutral or supportive of keeping DRS have changed your minds over the 2021 season is a question for the comments.

At the summer break this year we still didn’t know who would be Hamilton’s team mate at Mercedes for 2022. When we polled you, 83% said it should be George Russell, just 11% holding on for Valtteri Bottas and 5% for another driver.

In the end, Russell was announced for the role. At the time of polling, Russell had yet to finish in a points-scoring position for Williams, although the following month he’d achieve that and then a first (and admittedly, unusual) podium for the team he’s spent his first three seasons in F1 with.

Bottas moved on to Alfa Romeo, but the identity of his new team mate was a mystery for some time. When we asked you who the team should pick, eventual Formula 2 champion Oscar Piastri pipped Mick Schumacher to your favourite, 27% to 24%. The driver who ultimately got the gig, Guanyu Zhou, got just 11% of your backing, less than outgoing driver Antonio Giovinazzi on 14%.

Should F1 have awarded points in Belgium?

The Belgian Grand Prix was officially the shortest Formula 1 race ever and unsurprisingly received the lowest ratings ever from our readers. The race was abandoned after just three laps behind the safety car, and the results decided on a single tour of the track. Verstappen took an entirely uncontested win, Russell and Hamilton joining him on the podium.

The FIA decided to award half points based on this extremely limited amount of running. Verstappen therefore collected 12.5 points, Russell nine and so on down to 10th-placed Sainz on half a point.

Our readers overwhelmingly objected to the decision to award points for the non-race. Over two-thirds – 67% – strongly disagreed with points being awarded, a further 12% slightly disagreeing.

Fortunately, because Verstappen sealed the title by more than five points, he would have been champion regardless of whether points had been given at Spa. But after the title fight went to the wire, the result could have proven crucial.

The United States Grand Prix was a roaring success in 2021, with Netflix widely credited for the championship’s rising stateside popularity. A second race at the new Miami International Autodrome has been added to the 2022 F1 calendar.

Rumours continued to abound that a third US event will follow. Is that something our readers want to see? The verdict was mixed, tending towards negative. More than a third – 35% – strongly disagreed, with 57% of voters overall against the idea. Comparatively, only 35% were in favour of a third US round.

Undoubtedly the most contentious area of debate in 2021 concerned the policing of the sport by the stewards and race director. Consistency was often cited as an area of concern. When we asked at the end of November, before the title fight’s final, decisive moments, 64% of you slightly or strongly agreed F1 should have permanent stewards to ensure less variable application of the rules.

But when it came to the two big collisions between the title contenders, RaceFans readers tended to chime in with the stewards’ assessments. After Silverstone, 60% of you believed Hamilton was wholly or mostly responsible for colliding with Verstappen, while 61% said that Verstappen was chiefly to blame for their second clash in Monza. You also weighed in on subsequent rows at Interlagos, where Verstappen escaped an investigation, to the surprise of many, his Jeddah “brake test” which many felt received too lenient a sanction and the lap one incident in Abu Dhabi, in which more than half of you believed Hamilton deserved a penalty.

But by far the most controversial decision of the year was, of course, the one which cast a shadow over the conclusion to the championship. Did FIA F1 race director Michael Masi handle the last-lap restart at Abu Dhabi correctly by allowing only a portion of the field to un-lap themselves? The vast majority of you – 79% – said no.

Join us for more RaceFans reader debates throughout the 2022 F1 season. In the meantime, don’t forget to vote for your driver of the year before we announce the results at the end of the year.