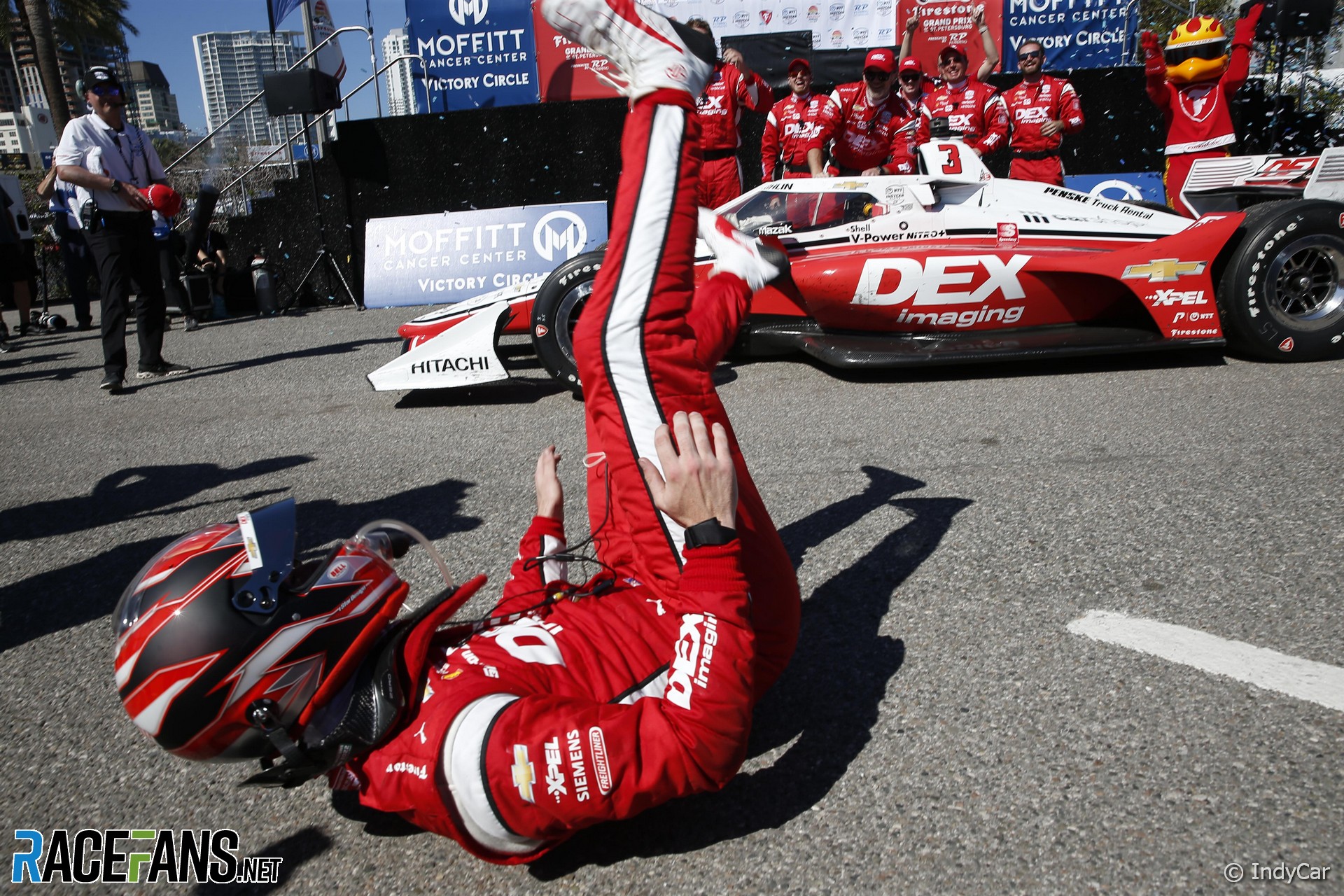 A spectacular pole position followed by a classy victory: The only thing about Scott McLaughlin’s start to the IndyCar season which wasn’t perfect was his celebration.

Having emulated last year’s champion Alex Palou by starting his second season with a win, McLaughlin leapt from his car in celebration – and tumbled head-over-heels onto the ground.

But that only made the 28-year-old’s first win in the series an even more memorable triumph. It was an immediate breakthrough for a driver who had been anxious to take a step forward during his second full season.

True, McLaughlin claimed Rookie of the Year honours against two big names from the worlds of F1 and NASCAR last year. But as he was the only first-year driver to run every race last season, that was not unexpected. Even so, he nearly gave the award away to Romain Grosjean, who had missed three of the season’s 16 races – all of which were ovals.

At the Indianapolis 500, McLaughlin was also voted the race’s rookie of the year. But with only one other first-time Indy 500 driver to compete with, he did so with a lowly 20th place finish.

On the other ovals McLaughlin did surprisingly well, finishing second at Texas and fourth at Gateway. He was fast at the Indy 500, but a critical error in the pits ruined his race. The bottom line, however, was that 14th in the championship with just five top-10 finishes wasn’t up to the standard of excellence set by Roger Penske’s IndyCar team.

Nor was it wasn’t up to the standard of excellence McLaughlin had set himself in his career, as a three-time champion of the Australian Supercars series, and winner of 56 races across eight seasons in the high-powered touring car championship.

“Three times, I had won straight back-to-back championships,” he explained, “and I know I’m a rookie and I wasn’t kidding myself, but at the same time it’s hard to go from the mindset of, ‘okay, win every week and that’s all that matters, nothing less,’ to going, ‘hey, I’d love a top 15.’

“I don’t work like that,” he continued. “I’m a competitive bloke. I want to win. I want to get poles. I want to dominate races and not even worry about things.”

McLaughlin admits to putting a lot of pressure on himself. He would ask “‘why isn’t this happening, why am I sucking in qualifying when I’m good?’ I’ve done that before, I’ve proved that. It’s a mind game, and you’ve got to be on top of it. You’ve got to just believe in yourself.”

With the level of expectation that comes with being part of Penske, arguably the premier team in the series, McLaughlin credits team owner, Roger Penske, for backing him into his second season.

“Roger’s pulled my head in, and we just got on with it,” he explained. “Speaking pretty candid, it’s just how it is. As a professional sportsman you go through highs and lows. You’re getting paid good money and you’re running 15th – it’s not good. I drive for the biggest motorsport team in the world. For me it wasn’t good.”

But from the start of this opening weekend of the 2022 IndyCar campaign, Scott McLaughlin rolled out on track looking more like the driver that Penske had been so willing to take a risk on, by bringing him to IndyCar despite just one year of single-seater experience.

Over the course of the weekend, he and his team went from hoping for a solid finish in the top seven, to being a serious threat to win from pole position. “This weekend, we proved that hard work, perseverance, you can get there, and I felt very proud of that,” he said.

“It was just phenomenal the way the car rolled out of the truck and I felt like I could really do what I wanted to do with the car from the get-go. What that does for confidence as a race driver is something that just feels very special.”

After making the Fast Six stage of qualifying just once in 2021, McLaughlin earned his first pole position, denying IndyCar’s modern day qualifying maestro, and his senior team mate, Will Power. After leading just five laps throughout the 2021 season, McLaughlin led 49 of 100 laps in his first win.

And, just to cap it off, he had to withstand mounting pressure from reigning champion Palou to secure the victory over the closing laps.

McLaughlin called this victory one of the four happiest moments in his life – in the company of his marriage to his wife Karly, his first Supercars title in 2018, and his 2019 Bathurst 1000 win.

After the race, he video called his mother and father back home in New Zealand. Due to the pandemic, McLaughlin hasn’t seen his parents in person since January 2020, but they’ve been following his IndyCar adventures ever since they began at the end of the 2020 season – and plan to be in Indianapolis this May to see their son race in IndyCar in person for the first time.

“They’ve only seen me on TV and the onboard videos I send back,” McLaughlin said. “I miss them dearly.

“My mum and dad, they’re the ones that got me here and made me believe in myself. My mum and dad have been infatuated with the USA for many years, and I guess that put the love of the USA and the want to come over here to the big leagues when I was a young kid, even way before my Supercars success.”

Drivers such as Dario Franchitti and Josef Newgarden built themselves up after far worse rookie campaigns than the one McLaughlin went through last season, and became IndyCar champions. Only time will tell if McLaughlin will go on to become an IndyCar champion in his own right.

But at the very least, this weekend was proof that a brilliant driver from an entirely different discipline of racing can find success in IndyCar – especially with the right people around to help them succeed.