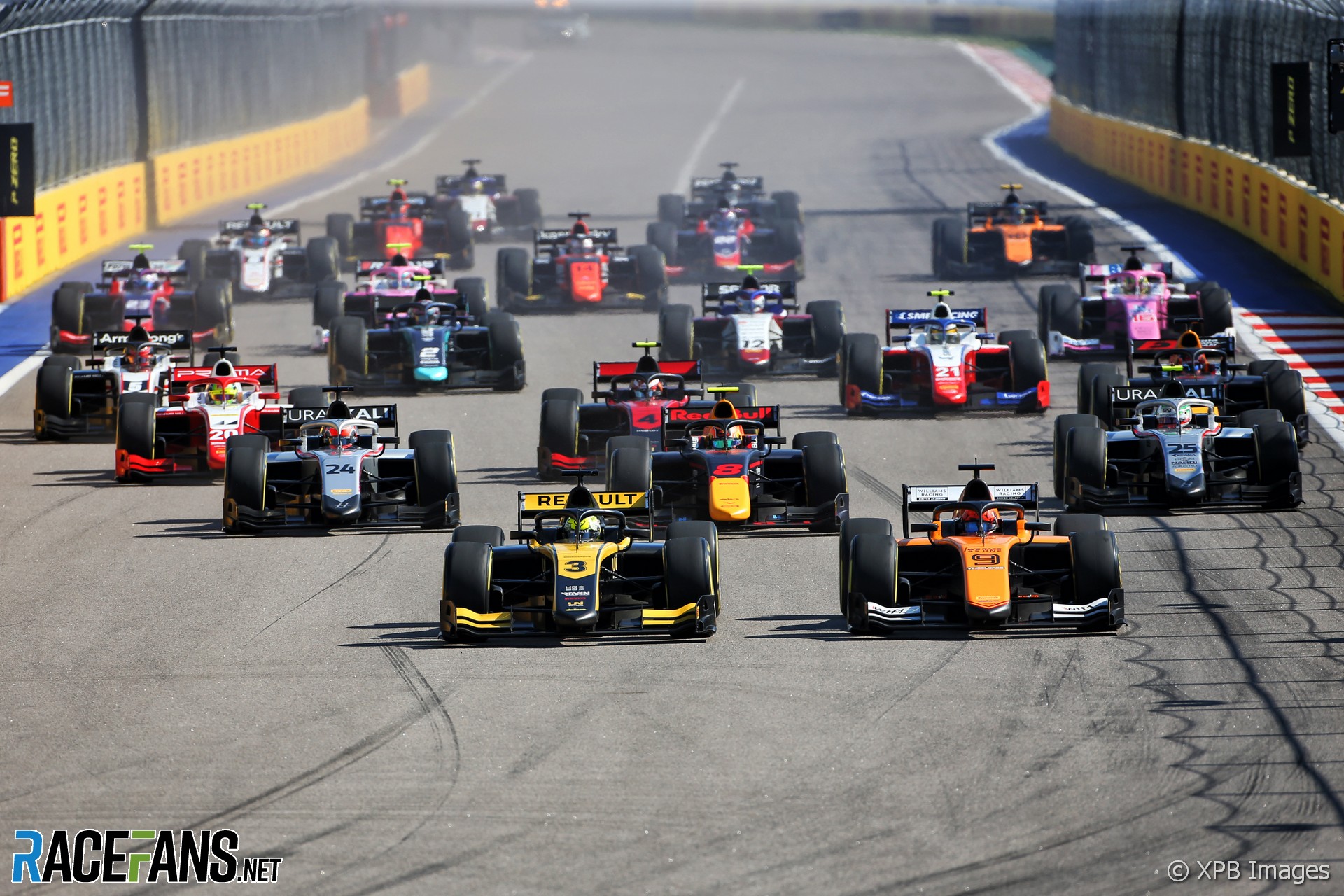 In the round-up: Formula 2 team bosses say that sport’s destinations should not be politically influenced but that they would respect drivers’ wishes to sit out a race.

Formula 2 team bosses argue sport should be separate from politics

Following the cancellation of the Russian Grand Prix, where Formula 2 was also due to race, team bosses said they would have respected a driver’s decision not to participate.

“I think we only have to respect the choice of the driver if he doesn’t want to to drive,” said François Sicard, of DAMS. “For me, we should separate this from the politics orientation, even when there are serious matters. But we should separate and we should keep the sport going on.”

Rob Niessink from Formula 2 newcomers Van Amersfoort Racing acknowledged that “we all understand that we’re living in a horrible era now” and said that the team wished “all the best” to those suffering. However, since the FIA motion to cancel the Russian Grand Prix by force majeure he said “It seems for us at this moment, it’s not relevant.”

“If we concentrate and focus on the sport, that’s already difficult enough,” he continued. “Politics is something we, as sport, should keep a sort of neutral position [on] as much as possible and focus on helping young kids that need our support. And we do what we need to do and wish the rest of the world all the best.”

“If our drivers choose not to go, we would totally respect that and we wouldn’t run their car,” he explained. Carlin said he hoped for a quick resolution to the crisis in Ukraine and that “the world could start to get back to normal and these sort of conversations – hopefully we won’t be having them for a long time.”

Jehan Daruvala has put in the fastest lap time on day one of Formula 2’s pre-season test in Bahrain. Formula 2 and 3 are holding separate sessions over the course of the three-day test, each running for half of the afternoon and half of the evening session in Sakhir.

Maloney tops Formula 3 times after day one in Bahrain

After running half-sessions, alternated with Formula 2, for the first day of Bahrain testing it was rookie Zane Maloney on top of the times for Carlin. Maloney’s best lap was a 1’47.614, set during the later session when track temperatures are cooler as the circuit heads into dusk.

Fellow rookie William Alatalo was second fastest on 1’47.783 for Jenzer and returning driver Jak Crawford third-fastest for Prema, setting a 1’47.799, both also during the afternoon session.

W Series first day of testing goes ahead at Barcelona-Catalunya

Of the 10 teams in the series, Jamie Chadwick, Abbi Pulling, Marta Garcia, Nerea Marti, Jessica Hawkins, Bruna Tomaselli, Lena Buhler, Emely de Haus, Megan Gilkes and Tereza Babickova ran the first test day and will continue tomorrow morning, before switching to the other half of the 20 confirmed test drivers from the afternoon session onwards. The majority of the 20 drivers at the Barcelona test are not confirmed for a 2022 race seat yet.

2021 and 2019 runner-up Alice Powell, who returns to W Series this year but did not run during the first day of testing said she had fond memories of the track. “I’ve raced here before, in 2012 – I had a really good result here, from 26th to 11th in GP3 so I like the circuit, good track. I’m looking forward to getting out on track tomorrow afternoon.”

Powell, the first and one of only two women to score points in GP3, has moved to newly-formed W Series team BSM. “I’ve known them for a little while, my first big sponsor when I moved into cars in 2008 in Ginetta Juniors so really nice to be back partnered with them and looking forward to hopefully having a good year with them.”

.@MichaelAndretti tells SBJ that he was trying to line up an American team principal for his prospective @F1 team but lost out on them because he didn't have the go-ahead from the @FIA.

🔳 When pressed, Andretti confirmed that person was Otmar Szafnauer, now with @AlpineF1Team. pic.twitter.com/DE0EUaF9Vf

We've been busy during the off-season! 🔨

Work is continuing on-track as we connect the #Silverstone Wing to the Hilton Garden Inn Hotel via a short but spectacular walk over the finish line 🏁 pic.twitter.com/IT2TXDqWhW

Kyle Kirkwood, lid on and primed to pound out his first laps @TXMotorSpeedway.

Here’s my personal opinion, for what it’s worth. The world is in crisis. Sport simply isn’t important enough for us to absolve ourselves of our responsibility to support the international community’s obligation to stand with a sovereign state that’s being illegally attacked.(1/3) pic.twitter.com/efqW60hqDQ

#NASCAR: Richard Childress in a call with reporters now says he was inspired by Ukrainian President Zelenskyy when he said "he didn't want to leave, he just needed ammunition."

So Childress called Ammo Inc. and they are sending a million rounds over the next 2 days.

A few stills from the new season four of Drive to Survive which arrives on March 11th.

Is there anything you want to know about how Netflix covered the 2021 #F1 season?

Ask below and we'll aim to include in our review. pic.twitter.com/3X7RhOQSVq

F1 2022 to feature supercars and cross-play, but no story mode (Xfire)

"In addition, sources also said that the game will be getting the highly requested VR support that fans of the series have long been asking for."

We don’t have a silver bullet – a unique all wonder solution – for our carbon neutrality and air pollution problem. A combination of technologies and uses must be developed side by side so we can decrease our impact on the planet and human health while providing faster, better, and improved quality of life for all world’s population.

Esterson 'getting to grips' with GB3 challenge (BRDC GB3)

Esterson: 'We’ve been pretty lucky with the weather so far and we’ve had a mix of wet and dry running so it’s all we could have asked for really as we’re prepared for anything, so it’s been good. The team and I are learning a lot about the car and we’re off to a good start.'

With Max Verstappen tipped for a new, extremely lucrative and very lengthy contract at Red Bull, Sjaakfoo asks what motivation the current world champion could possibly have to move elsewhere?

Makes sense, no reason to move if you’re happy in the team and happy with the people involved. I’m sure he’ll have some performance clauses in there if need be, he’ll also still will be only about 30 by the time this contract runs out.

Like, unless you have some childhood dreams about driving for a certain team (like Vettel and Ferrari), why move from a team that can give you a race and even championship winning car?
@sjaakfoo