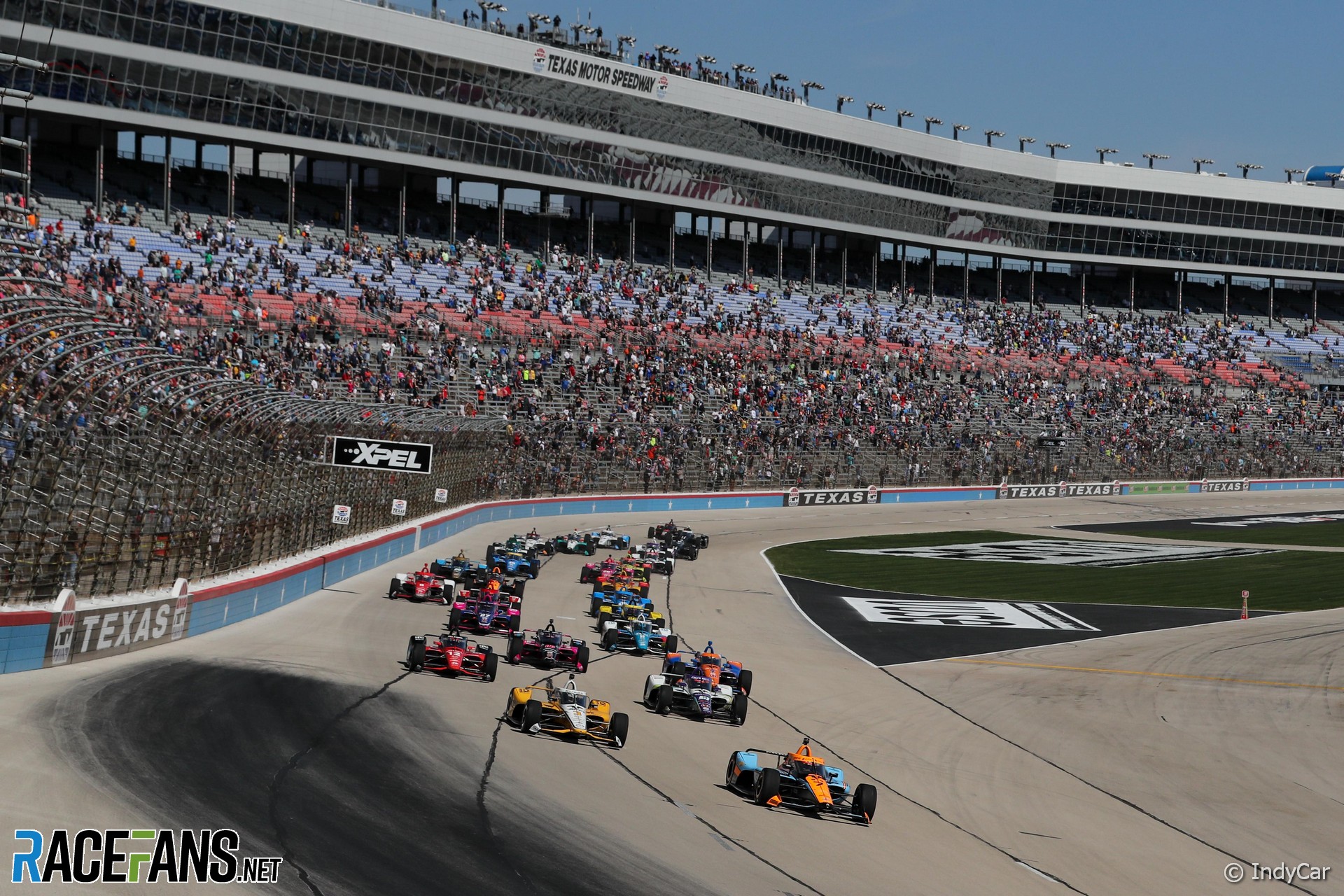 Ganassi driver Marcus Ericsson finishing behind them in third. All three drivers praised the quality of the race at the Texan track at a time when its future on the calendar is not certain.

Multiple factors contributed to the improvement in racing. To mitigate the effect of turbulent air, IndyCar allowed teams to run optional barge boards like the ones offered for last year’s Indianapolis 500, which added downforce as needed, and contributed to a much livelier race than the previous year’s 500.

But Texas’ biggest pain point for IndyCar was the lingering impact of applying PJ1 traction compound to the corners in 2019. It was a change made to benefit NASCAR racing, but had a detrimental effect upon IndyCar. It rendered most of the outside grooves useless due to the total lack of grip, and turning recent races into single-file processions where the only overtaking happens during pit cycles, or on restarts. The PJ1 traction compound has recently been replaced with a resin alternative which promised to reduce the negative effects IndyCar experienced.

Penske driver Will Power urged IndyCar to schedule additional practice sessions to place more rubber on the outside groove in order to develop a second line through the corners. IndyCar duly scheduled a voluntary 30-minute practice session on Saturday afternoon after qualifying in addition to the regularly scheduled practice time on Friday and Saturday.

All of these factors made this year’s race at Texas a much better show for the fans and drivers. There were 372 passes for position and 15 lead changes in Sunday’s race. The most significant of these passes was Newgarden’s final lap move around the outside of McLaughlin through turn four, to take the race win by 0.069 seconds.

In contrast, the 2021 double-header at Texas produced just 240 passes for position and 15 lead changes across 675 miles of racing. This year’s race was also held in the daytime, after years of running from the late afternoon until after sunset.

When asked if the change in time slot played a factor in the quality of racing, Newgarden demurred: “It wasn’t the daytime running, it’s the changes to the aerodynamic package. We were running quite a bit more downforce than last year.”

“I think the [extra] session they ran cleaned up a little bit of the second lane. It really did. I wouldn’t have been able to do what I did in three and four last year. There’s just no way. I would have hit the fence for sure.”

“I certainly hope we continue to build with this package and get this better. Once you have a bit of two lanes through this track, it’s going to be a lot of fun and we’ll have races like we did today.”

“Sometimes when we go racing it’s very hard to overtake on the ovals,” said Ericsson, who started 14th and worked his way onto the podium. “Then you get very static racing, and you get frustrated because you cannot really make moves. That was not the case today

“I think whatever IndyCar has done, they’ve done a great job. We need to understand what we did right this weekend to get the racing this much better, because it was a lot more fun when you knew you could get around people – not easy, but you could get around people. That was making a huge difference for the enjoyment behind the wheel, I would say.”

Ericsson wasn’t the only driver who was able to make moves through the field: Jimmie Johnson went from 18th to a career-best sixth-place finish, and last-minute substitute Santino Ferrucci rose from 27th to ninth.

There were still lulls in the action. Drivers spent the first half of the race running single-file and focusing on meeting their fuel mileage numbers, which ultimately made for interesting tactical battles. A string of accidents occured involving drivers being pushed into the dirty outside groove and striking the wall, which thankfully didn’t deter others from attempting to run on the outside later in the race. The second half of the race was much livelier, however, with seven on-track lead changes.

So, purely from the perspective of quality of racing, IndyCar’s annual trip to Texas – a staple of the calendar since the facility opened in 1997 – was a success.

But was it enough to secure the long-term future of this partnership of series and venue? The current contract between IndyCar and Texas Motor Speedway ended at the conclusion of this race.

Unfortunately, despite producing a better race this year than in prior years, grandstands for race day looked sparsely populated. This was, at one point, one of the few venues on the Indy Racing League side of the American open-wheel racing split – apart from Indianapolis – which could reliably boast six figures’ worth of attendance and a healthy crowd in the main grandstands.

The last IndyCar race at California Speedway (Fontana) in 2015 was one of the more entertaining – albeit dangerously nerve-wracking – IndyCar oval races in recent memory, but woeful attendance ensured that it wouldn’t return for 2016 and beyond. Attendance woes later led to the Phoenix and Pocono ovals being cut from the calendar, regardless of quality of racing, safety concerns, or both.

Texas Motor Speedway’s continued presence on the calendar could not have been justified if the trend of processional races and barren crowds continued. At least for this year, the first problem has been alleviated, and there’s a genuine blueprint for great racing in the future.

But in terms of the second issue, it could already be too little, too late.

12 comments on “IndyCar drivers praise better racing at Texas after changes but does the event have a future?”