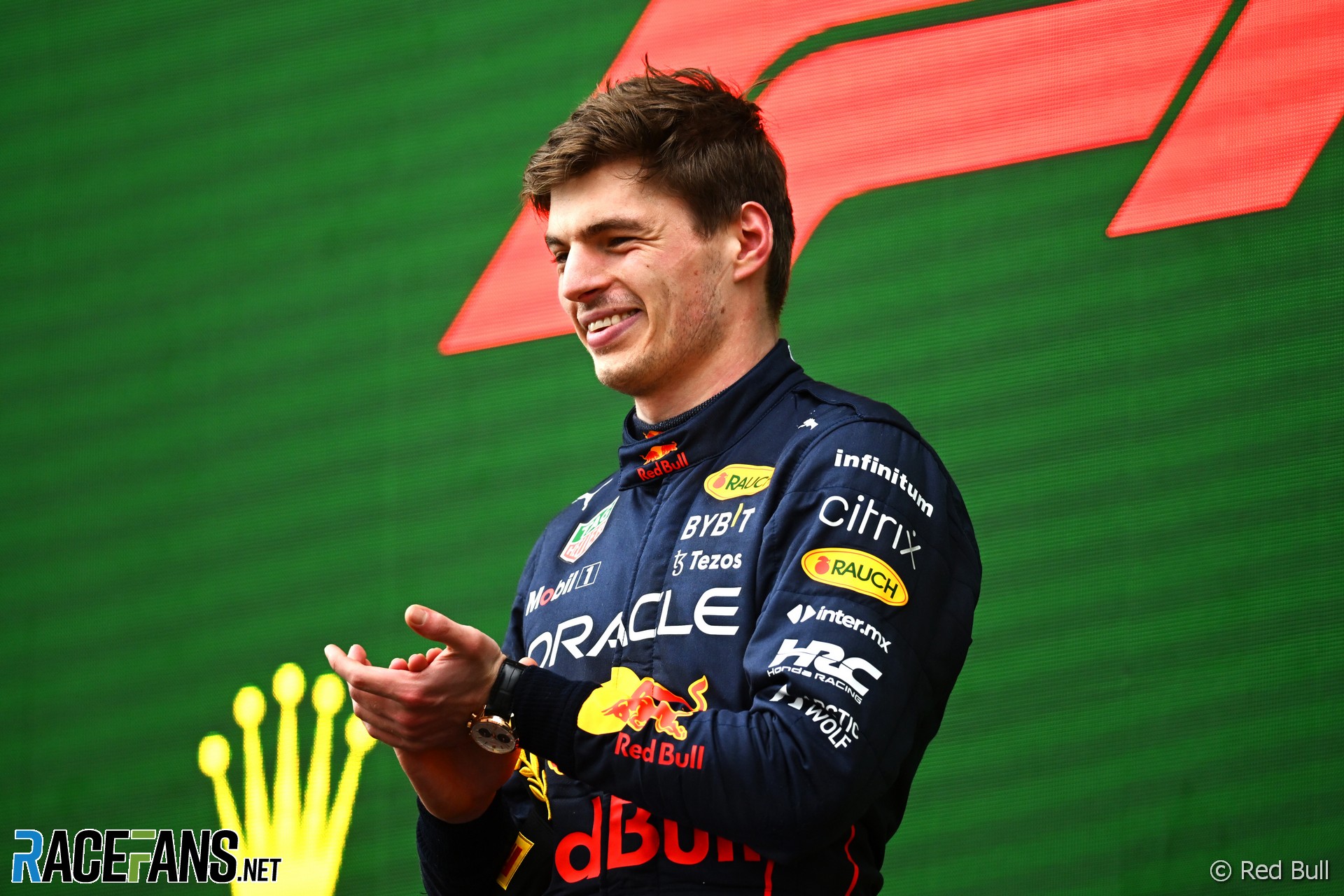 At the Australian Grand Prix, Charles Leclerc became only the 26th driver in the history of the sport to achieve a ‘grand slam’ of pole position, fastest lap and leading every lap on the way to victory.

At that point half of those drivers had achieved that rare feat more than once. But in the very next round at Imola Max Verstappen became the 14th to do so.

Between them they are the first pair of drivers to score ‘grand slams’ in the same season since 1979. They were Gilles Villeneuve at Long Beach for Ferrari and Jacques Laffite at Interlagos for Ligier.

Verstappen grabbed the new maximum haul available for an F1 driver at the first time of asking, since the series increased the value of a sprint race win to eight points. He left Imola with an extra 34 points in his pocket – more than he’d scored over the opening three rounds combined.

Red Bull nearly did the same, but Leclerc split Verstappen and Sergio Perez on the sprint race rostrum, meaning the Milton Keynes squad trousered 58 of a possible 59 points.

Verstappen bagged the 22nd win of his career, putting him level with Damon Hill in 14th place on the all-time winners list. He now has 17 fastest laps, which puts him level with Rubens Barrichello.

While F1 has now declared that the driver who is quickest in Friday qualifying at sprint race weekends is considered the pole position winner, the fact remains pole for the grand prix is decided by the Saturday sprint race, as the regulations make inarguably clear. Fortunately, no one other than Verstappen can lay claim to having taken pole position by any measure last weekend. it was his 14th, giving him as many as Barrichello again, plus Alberto Ascari, James Hunt and Ronnie Peterson.

Perez followed Verstappen home in the grand prix, delivering Red Bull’s 18th one-two finish, and their first for six years, the last coming courtesy of Verstappen and Daniel Ricciardo at Sepang in 2016. The other 16 were all scored by Sebastian Vettel and Mark Webber between 2009 and 2013.

Lando Norris scored his sixth pole position, somewhat unexpectedly given McLaren’s poor start to the season. He has finished on the podium in all of the last three F1 races to be held in Italy.

He was promoted by Leclerc’s late error, which also let George Russell in to finish fourth and move Valtteri Bottas up to fifth. That’s the best result for an Alfa Romeo driver since Kimi Raikkonen came fourth at Interlagos three years ago.

Sebastian Vettel and Lance Stroll picked up their first points of the season, and the first for Aston Martin. This means all 10 teams have now scored points, which did not happen in the previous two seasons. Mick Schumacher and Nicholas Latifi are the only full-season drivers yet to score points, and the latter is still ranked below Nico Hulkenberg who substituted for Vettel in the first two races of the year, and achieved a higher finish than the Williams driver during that time.

It was a grim weekend for Lewis Hamilton, who recorded one of the worst finishes of his career with 13th place. It’s been a long time since he finished that low down without some kind of outside factor being responsible.

He came 15th in Azerbaijan last year, though this followed an error at a standing restart which was given with two laps to go, prior to which he had been running third. He was classified 19th at Valencia in 2012 and 14th at the Circuit de Catalunya two years earlier, but on both occasions he was not running at the finish. Prior to that he was 18th in German in 2009, but there too he was compromised by a first-lap puncture.

You have to go back to the 2009 British Grand Prix for the last time Hamilton had a result as poor as that entirely down to car and driver performance. He finished 16th in McLaren’s MP4-23, a car he likened his current Mercedes to on Saturday evening.

If any driver was as downcast as him come Sunday evening, it was perhaps Carlos Sainz Jnr. He can’t have expected to do even worse at Imola than his second-lap retirement at Melbourne, but he did, dropping out on the first lap.

Who was the last driver to cover only one lap in two starts? It was actually four drivers: Bottas, Perez, Leclerc and Stroll, who were eliminated on the first lap at the Hungaroring last year and then, along with the entire field, covered only one lap in the farcical non-race at Spa later the same month.

Have you spotted any other interesting stats and facts from the Emilia-Romagna Grand Prix? Share them in the comments.