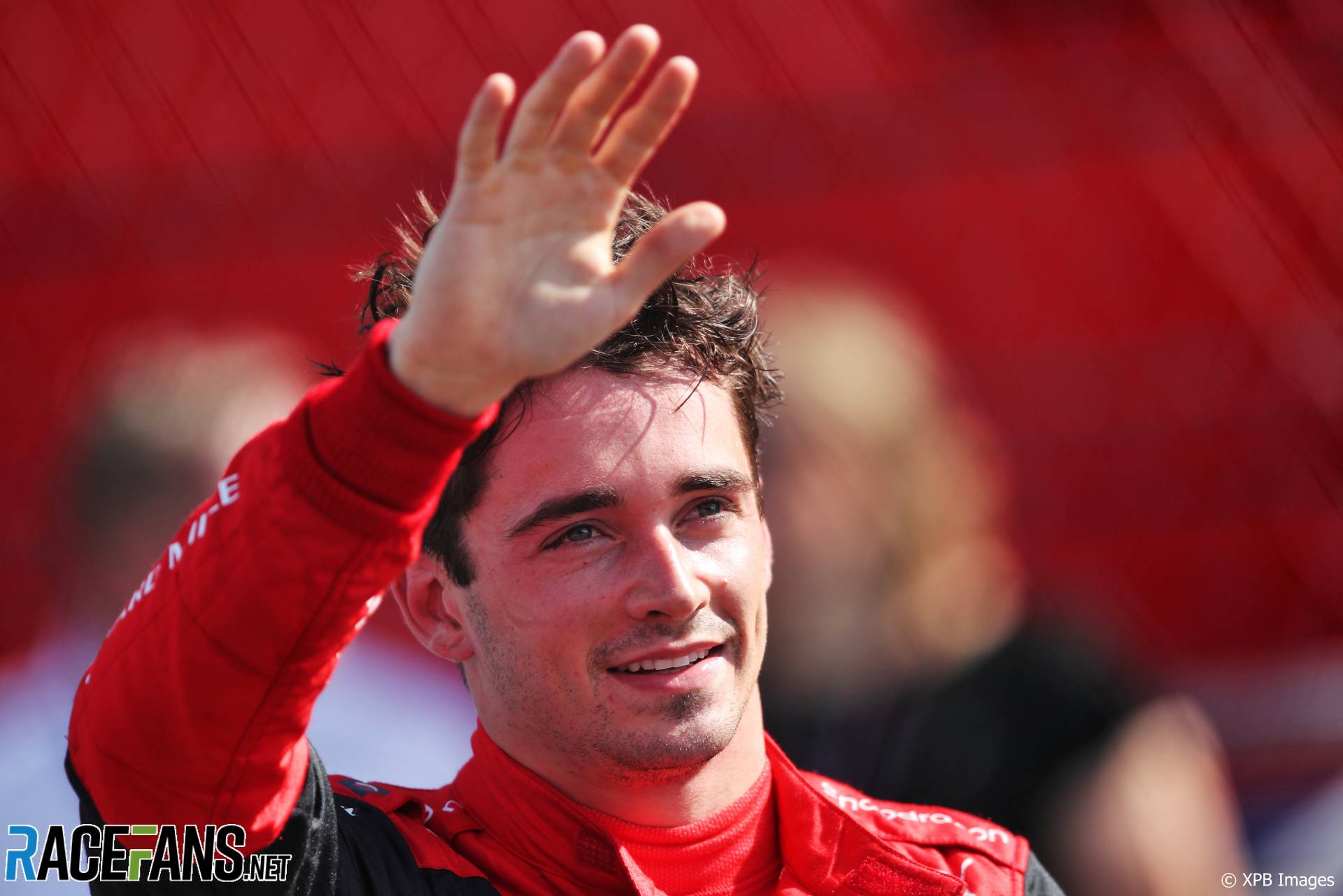 Max Verstappen had pole position for the Miami Grand Prix in his hands until he made a slight mistake on his final lap.

That opened the door for Charles Leclerc to take pole position – and his Ferrari team mate will join him on the front row.

Lewis Hamilton said Mercedes had made an improvement after claiming a place on the third row. But his team mate George Russell was eliminated in Q2.

With Esteban Ocon’s cracked chassis sitting in his Alpine garage, only 19 drivers were available for qualifying, meaning four of those would be eliminated in the opening round.

As every practice session had been interrupted by at least one red flag, drivers wasted no time in joining the track, the Haas pair leading half the field out as soon as the session went green. As it turned out the opening session, held in sweltering 33C heat with track temperatures as high as 53C stayed green throughout.

Verstappen set the initial pace with a 1’30.235, a healthy half-second quicker than his team mate. George Russell was less than three-hundredths off Sergio Perez, but his team mate had a difficult start to the session.

Lewis Hamilton had a scruffy start to his first lap, which he abandoned after running wide at turn 11. On his next attempt he got crossed up in turn eight, spoiling his run onto the quick section that followed, leaving him only 12th.

Ferrari were next to show their hand, Charles Leclerc moving to the top with a 1’29.474. His team mate initially backed him up in second, but Verstappen responded immediately with a lap which left him three tenths of a second behind his championship rival.

Valtteri Bottas was the last driver to set a time, taking ninth place, which knocked his former team mate Hamilton into the drop zone. The Mercedes driver, who lost another lap after cutting across the turn 14-15 chicane, was joined by the Williams pair and Pierre Gasly.

“So Lewis this will be one timed lap,” his race engineer Peter Bonnington told him as he headed out for a final run with less than three minutes to go. His lap time deficit to his team mate was “mainly exit turn 12 and turns 14, 15.”

Hamilton had to round a trio of cars through the quick turn seven and eight, but did so without trouble, and produced the first of two personal best sectors as he jumped well clear of the drop zone, getting within a second of Leclerc.

The Mercedes driver’s progress was bad news for Kevin Magnussen, who was also in trouble as his radio wasn’t working. He slipped into the bottom five and was unable to find the extra tenth he needed to demote Bottas in his place.

Zhou Guanyu went no further in the other Alfa Romeo, blaming traffic in the final sector, and the Williams pair were also eliminated.

Red Bull hit back at Ferrari as the second phase of qualifying began. Or, to be precise, Verstappen did, leading Perez by almost half a second, while the two F1-75s came within a few hundreds of the other RB18.

With five minutes to go, Leclerc dug deep an knocked Verstappen off the top spot by seven-hundredths of a second. Meanwhile, with Hamilton a solid fifth, it was the other Mercedes driver needing to find a late improvement to secure his progress.

Russell had complained about worsening porpoising towards the end of Q1, and was still finding his car a handful in Q2. He eventually moved up to seventh with a lap which left him almost four-tenths of a second shy of Hamilton.

Mick Schumacher was the only Ferrari-powered driver in the drop zone along with the remaining Mercedes-engined cars. Yuki Tsunoda, who clipped the wall at turn 16 on one lap, was clinging to the final place in the top 10 as the final minute began.

Tsunoda held onto his place after a frantic final exchange of lap times which saw Mercedes lose one of their cars. As the track continued to rubber in, lap times fell, and Lando Norris leapt from the bottom five to third-fastest.

Lance Stroll also got into Q3, jumping up to eighth. Their gains pushed out Russell and Fernando Alonso.

Sebastian Vettel was left to curse an error at the chicane after failing to accompany his team mate into the top 10. Daniel Ricciardo was also left behind while Mick Schumacher ended the session last and will therefore line up one place ahead of his team mate.

Leclerc put up a 1’29.055 with his first run but his team mate came within a hundredth of a second of beating it. “Very nice improvement in the infield,” remarked his race engineer Riccardo Adami.

Verstappen had fractionally more in hand, however. The Red Bull driver snuck under the 89 second barrier, beating Leclerc by six hundredths of a second to go top.

Perez took up fourth with his increasingly familiar half-second deficit to Verstappen. Bottas put himself a strong fifth ahead of Hamilton and Norris.

Verstappen’s grip on pole position slipped early in his final run. He twitched wide in the quick turn five, cut the corner, and his hopes of improving his lap time were dashed.

The door was wide open for Leclerc and he grabbed the opportunity, lowering his best time to a 1’28.796 and planting his Ferrari on pole position. Sainz also punished Verstappen for his mistake, taking second on the grid by a mere five thousandths of a second. Perez almost did the same, finishing the session four-hundredths of a second off his team mate.

Perez pushed Bottas down to fifth, meaning he will share the third row with Hamilton as they did at the season-opener. “That’s an improvement guys,” said the Mercedes driver on his way in, “I gave it my all.”