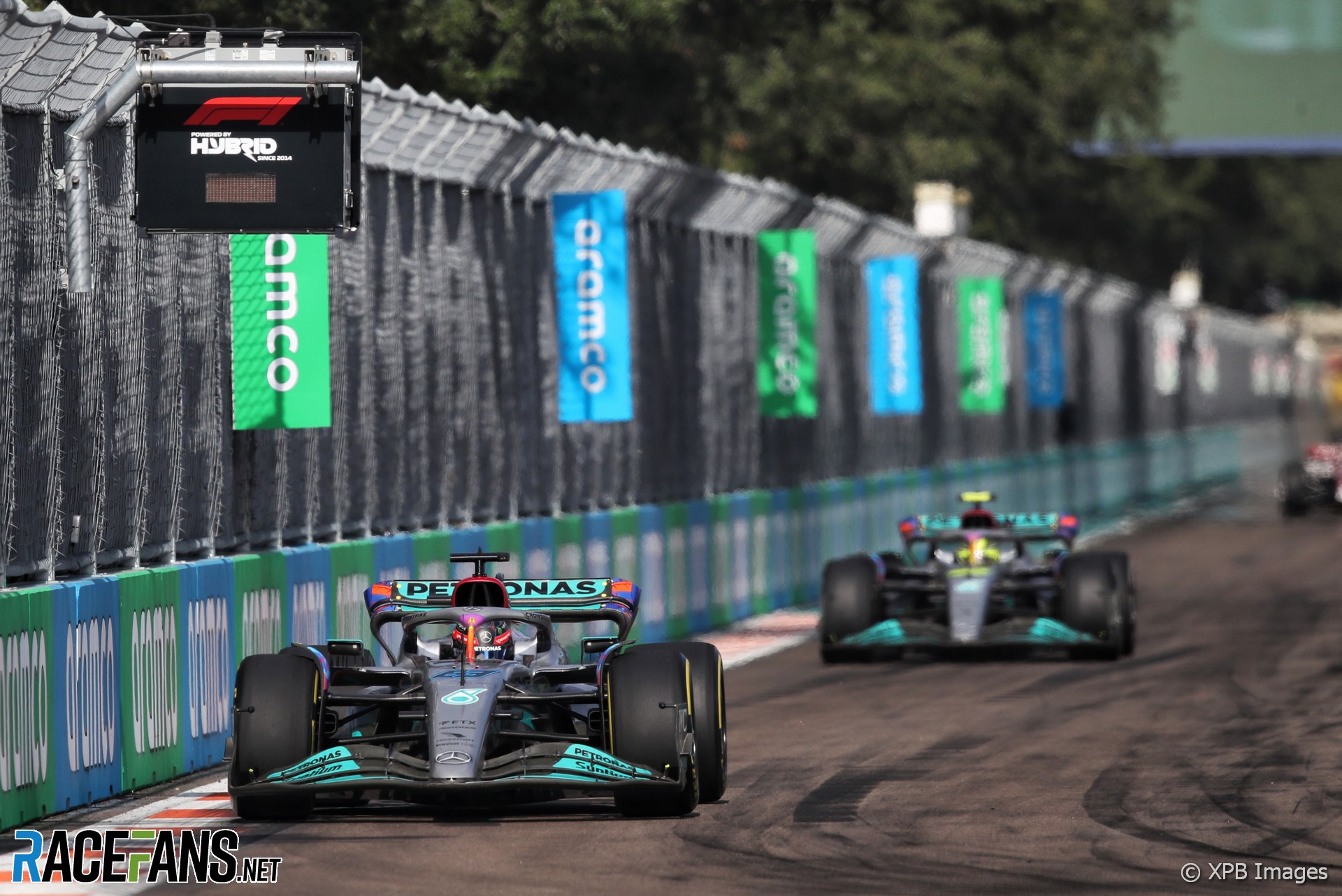 Lewis Hamilton explained why he decided not to make an extra pit stop during the Safety Car period in the Miami Grand Prix.

Parts of Hamilton’s radio conversation with his team were played during yesterday’s race broadcast which showed the world champion discussing whether to use the opportunity to change his tyres. He decided not to.

Hamilton had already made his one required tyre change before the Safety Car came out. His team mate George Russell used the interruption to make his tyre change and passed Hamilton following the restart.

Hamilton had the option to make an extra pit stop which would have dropped him behind Russell but also left him on fresher tyres. However the team’s strategist James Vowles advised him on the radio that he should stay out.

“When you’re out there, you don’t have all the information,” Hamilton said after the race. “You don’t know where everyone is and where you’ll come out. You don’t have the picture that they have on the screen.

“So when you’re given the responsibility to make the decision, it feels like you’re gambling and I don’t like that. So I was like, ‘you guys make the decision’. But either way, we were just a bit unfortunate with the Safety Car today.”

After the race Hamilton suspected he would have been better off starting on the other compound. “George obviously did a great job in that first stint,” he said. “He was on the better tyre to start with, the hard tyre was the best tyre.

“So in hindsight, maybe we could have started on the hard tyre. But again, he did a great job to recover from his position and get the points. So we got fifth and sixth today, it’s good points for the team.”

“George had a window, no one behind him, he was able to switch on a practically new medium [tyre]. And Lewis had to decide ‘do I keep the position on the hard, or do I go on a soft?’, which would have been also tricky.

“So that was probably a 50-50 decision and at the end it didn’t work out for him. But it’s not the first time that he’s been unlucky this season with the Safety Car.”

When the Safety Car came out Hamilton had done less than half as many laps on his set of hard tyres than Russell ahead of him:

After Russell pitted, Mercedes advised Hamilton that he would be better off staying out:

RaceFans is run thanks in part to the generous support of its readers. By contributing £1 per month or £12 per year (o the same in whichever currency you use) you can help cover the costs of creating, hosting and developing RaceFans today and in the future.