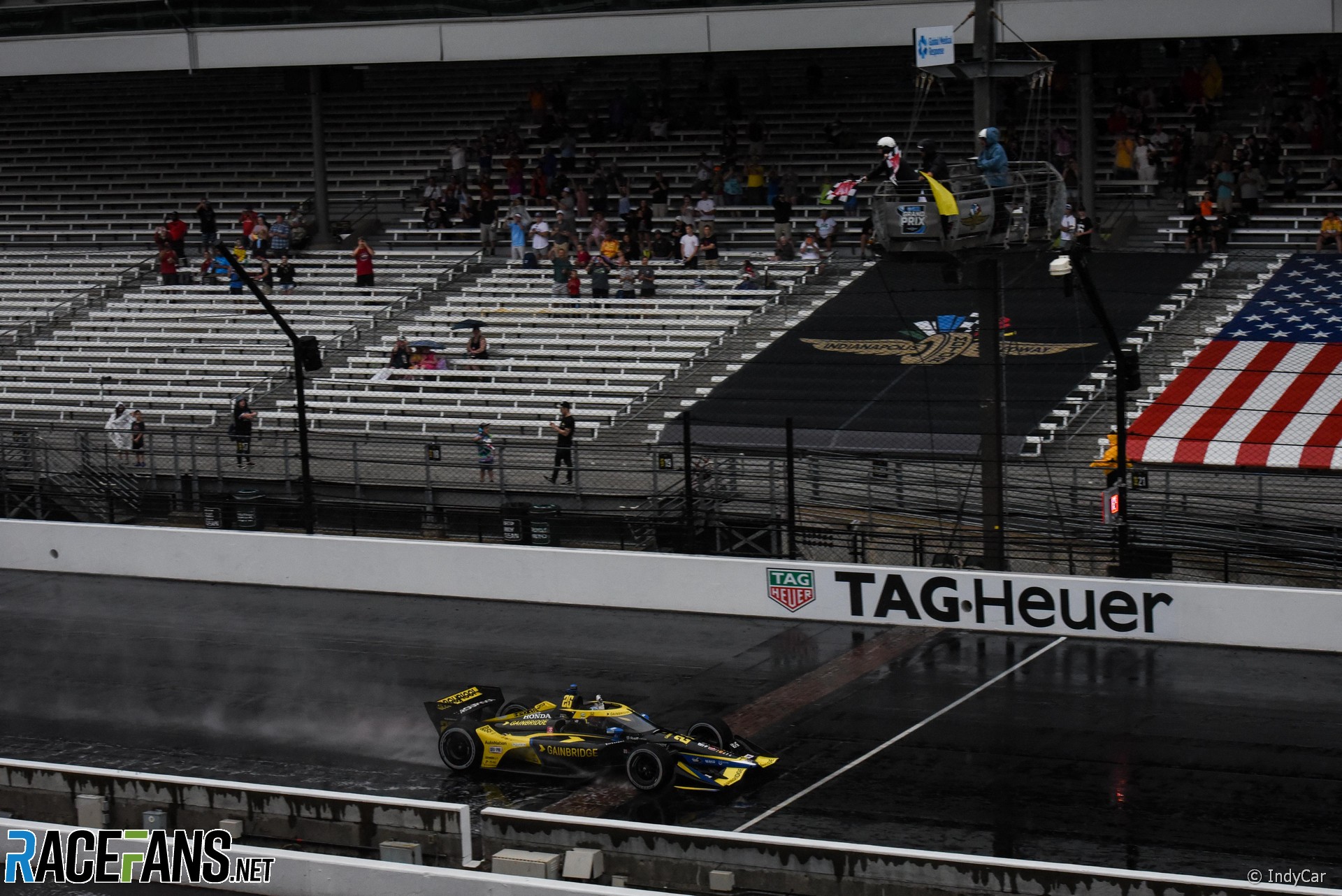 Colton Herta navigated all manner of changing weather conditions and seven full-course cautions to win a chaotic 2022 Grand Prix of Indianapolis from 14th on the starting grid, while Will Power took the championship lead heading into the 106th running of the Indianapolis 500.

It was IndyCar’s first wet race for three years, since when the series introduced its Aeroscreen. Immediately, there was action at the front of the field: In a fantastic sequence of opening laps, Álex Palou took the lead from pole-winner Will Power, then Pato O’Ward passed Palou just a few corners later to lead the first lap. Colton Herta, who started 14th, took a risk and pitted for slick tyres after just two laps. The strategy paid dividends as he eventually rejoined behind O’Ward.

After nearly crashing at turn eight, Herta wrestled control of his Andretti on full opposite lock, then ripped around the outside of O’Ward, and moved into the lead once the rest of the field pitted on lap five. This would, in hindsight, be the most adversity Herta faced as he went on to lead 50 out of 75 laps that were completed on the day.

The race ran to its maximum two hour time limit thanks to multiple full-course cautions and heavy rainfall late in the race. The first caution came on lap six when Palou spun off and stopped at turn ten. On lap 16, Josef Newgarden was contesting fifth place against Takuma Sato – after being overtaken, he was caught between Alexander Rossi and Jack Harvey. Harvey turned Newgarden around, sending the Penske spinning around. Newgarden would finish 15 laps down in 25th place.

Racing resumed on lap 21, but made it only three corners before the caution flags were waved again: 2021 Indy GP winner Rinus VeeKay was pushed off course, and slid right into the path of rookie Devlin DeFrancesco who collided with VeeKay. A spin for Dalton Kellett at turn six brought out the fourth full course caution. Marcus Ericsson, who’d pitted back on lap 18 during the second caution, moved to the lead of the race after starting 18th. With rain beginning to fall once again, Palou and Alexander Rossi pitted for wet tyres.

But just one corner into the restart on lap 42, O’Ward and Herta brushed wheels going into turn one, sending O’Ward spinning right into the path of Rosenqvist. The two McLarens hit, and Sato also spun off through turns one and two. The caution came out once again, just as the race hit half-distance. On the ensuing restart at lap 46, Ericsson let team mate Dixon through to unlap himself. Herta, who restarted from second position, took the lead at turn four. Ericsson would freefall down the order, while Herta would build his lead over second-placed Scott McLaughlin, who stood to take the lead in the championship as they ran.

While contesting third place, Jack Harvey and Romain Grosjean made contact into turn seven, sending Grosjean spinning off and down the order. Simon Pagenaud, who started 20th, was now in third place, but on lap 57, O’Ward overtook Pagenaud to retake third position, just before Jimmie Johnson spun off to bring out the sixth caution – erasing Herta’s lead.

In a defining caution period, the rain began to fall harder. At first, the leaders pitted for another set of slick tyres, but as multiple cars lost control under the safety car, Herta, Pagenaud, and Power elected to come back in for wet tyres Meanwhile, McLaughlin, O’Ward, and Grosjean remained out on track on slicks, but McLaughlin – who’d initially beaten Herta out of the pits on lap 59 – spun out of the lead under yellow, and Grosjean spun down the order as well.

With fifteen minutes left in what was now a timed race, Herta wasted no time retaking the lead on the ensuing restart. He easily took the lead going into turn one as O’Ward suffered for grip on his slick tyres. McLaughlin had no grip at all when he spun through turn three, bringing out a seventh caution of the race. Under the caution, O’Ward spun out under the safety car. The trio of O’Ward, McLaughlin, and Grosjean would have to pit after the final restart, and they dropped down to 17th, 18th, and 19th at the end of the race.

A perfect restart from Herta allowed him to break away from Pagenaud and the field behind him. He was several seconds per lap quicker than the field, allowing him to pull away even after a brief off-course excursion at turn twelve.

The race effectively ended when Juan Pablo Montoya crashed out from seventh in the final two minutes. Montoya was uninjured, but disappointed after losing out on a top ten finish in his return to IndyCar.

Pagenaud scored his first podium as a Meyer Shank Racing driver in second. And with his fifth top-four finish of the season, Power took the championship lead on 138 points – Penske’s trio of Power, McLaughlin, and Newgarden now occupy the top three in the table in order going into next week’s time trials for the Indy 500.

Ericsson surged back into the top ten after his initial freefall, and finished a strong fourth place, ahead of Conor Daly in fifth, who recorded his best finish since the 2017 Gateway 500k. Rosenqvist recovered from his run-in with O’Ward and salvaged a sixth place finish – ahead of Takuma Sato, in seventh.

Rookie Callum Ilott and Juncos Hollinger Racing scored their best-ever finishes for driver and team, finishing eighth. But at the chequered flag, Ilott was hit from behind by Christian Lundgaard, whose damaged car came across the line in ninth. Ilott and Lundgaard did not suffer any serious injuries.

Scott Dixon – who ran out of fuel heading into the pits earlier in the race – finished in tenth. Also, Tatiana Calderón finished a career-best 15th place and became the first woman to lead a lap in IndyCar since Simona de Silvestro at the 2011 Baltimore Grand Prix.