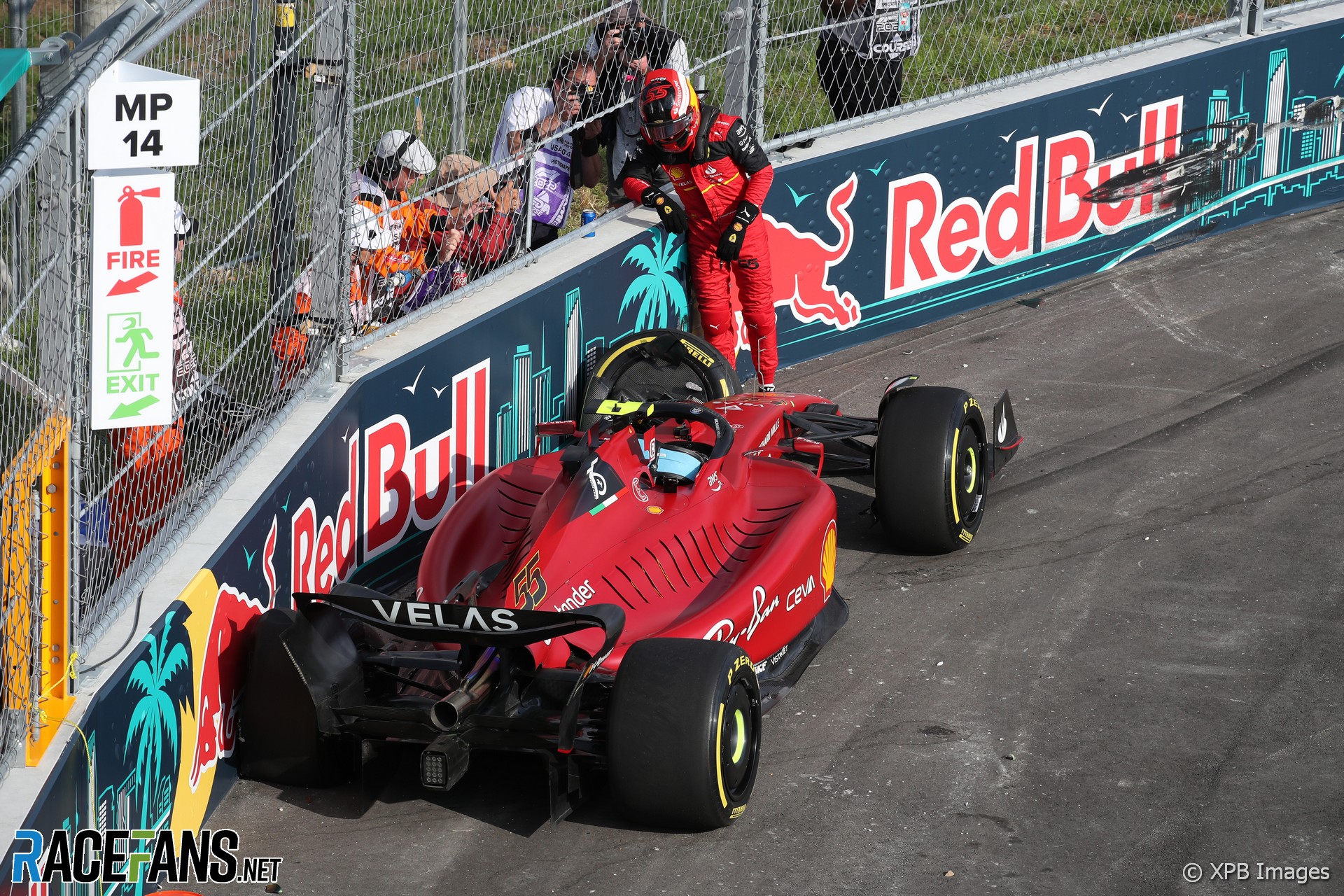 Carlos Sainz Jnr’s heavy crash on Friday at the Miami International Autodrome chicane prompted calls from drivers for impact-absorbing TecPro barriers to be added at the corner.

Sebastian Vettel was among those who raised concerns at the time. “It will always damage the car when you go off,” said the Aston Martin driver. “But the question is, where you’re landing, whether there’s concrete or TecPro.

“I don’t know what can be done overnight when I think when we come back, it’s important to look at all the places and see whether you can improve.”

Like Sainz, Ocon was declared fit to race, though he said afterwards he was only at “50% physically” due to the hard hit he sustained.

The two heavy crashes prompted further calls for TecPro barriers to be used. The deformable structures which are widely used across F1 tracks were developed in collaboration with the FIA Institute.

However Jochen Braunwarth, the director of motorsport at barrier makers Geobrugg, told RaceFans pre-race simulations of likely crashes at that point on the circuit had led to the conclusion that a concrete barrier was the most suitable solution, due to the angles of impact predicted.

“Usually the areas where you have a very shallow impact angle the idea is, as with a guardrail or a concrete block barrier on a highway, to bounce off and then slide along.

“As soon as that impact angle is reaching a certain angle, you need to put a TecPro barrier, you need to put something. And this simulation, which was done at the FIA, was suggesting that the impact angle there is a very shallow angle which didn’t make it necessary for the FIA to put in any TecPro,” Braunwarth explained.

As primarily mesh manufacturers, Geobrugg advise on the use of their FIA grade one-homologated barriers but do not make the final decisions on placing them. However, Braunwarth added that the lack of incidents at turn 14 during the grand prix supported the findings of the simulations.

“I think accidents are always happening and are always freak; during the event itself or during Porsche during [W Series] there was no issue in that corner itself. Every time a driver is making a mistake, does that mean you have to change the design and the driver is never at fault?”

The circuit operators had another factor to bear in mind when designing barrier placement around the chicane. “There were three areas of the circuit which had to be opened every night,” Braunwarth pointed out. “Every time you cross the turnpike area and you cross that area in turn 14.

“It was necessary to open every evening and close every morning to allow cars to drive on that access road.” A TecPro barrier would have been more time-consuming to reposition between crossings.

However GPDA director Alex Wurz remained uncertain the correct type of barrier was chosen. “Strictly speaking we didn’t have an injury, so maybe you can say it [TecPro] is not necessary,” he told Reuters, “but we want to say that if we had it, it would improve the situation. No research in the world can tell me it would have been a downside to put [TecPro down].”

Alpine team principal Otmar Szafnauer was also concerned by the extent of damage done in Ocon’s crash. “The chassis itself is cracked,” he said. “It’s a lot to crack a chassis.

“It had to be a huge spike in force there. When something doesn’t move, that’s what happens. You slow down very quickly, you get a massive spike of force in the chassis and it breaks.”

He also called for the barrier to be changed ahead of next year’s race. “Hindsight’s a wonderful thing. I think if we look back the FIA too should have a review and my personal opinion is had we had a TecPro barrier there, it would have been safer.

“The FIA’s job isn’t to protect cars, but protecting cars and drivers are highly correlated. If the car is damaged, the driver can get damaged, too.”