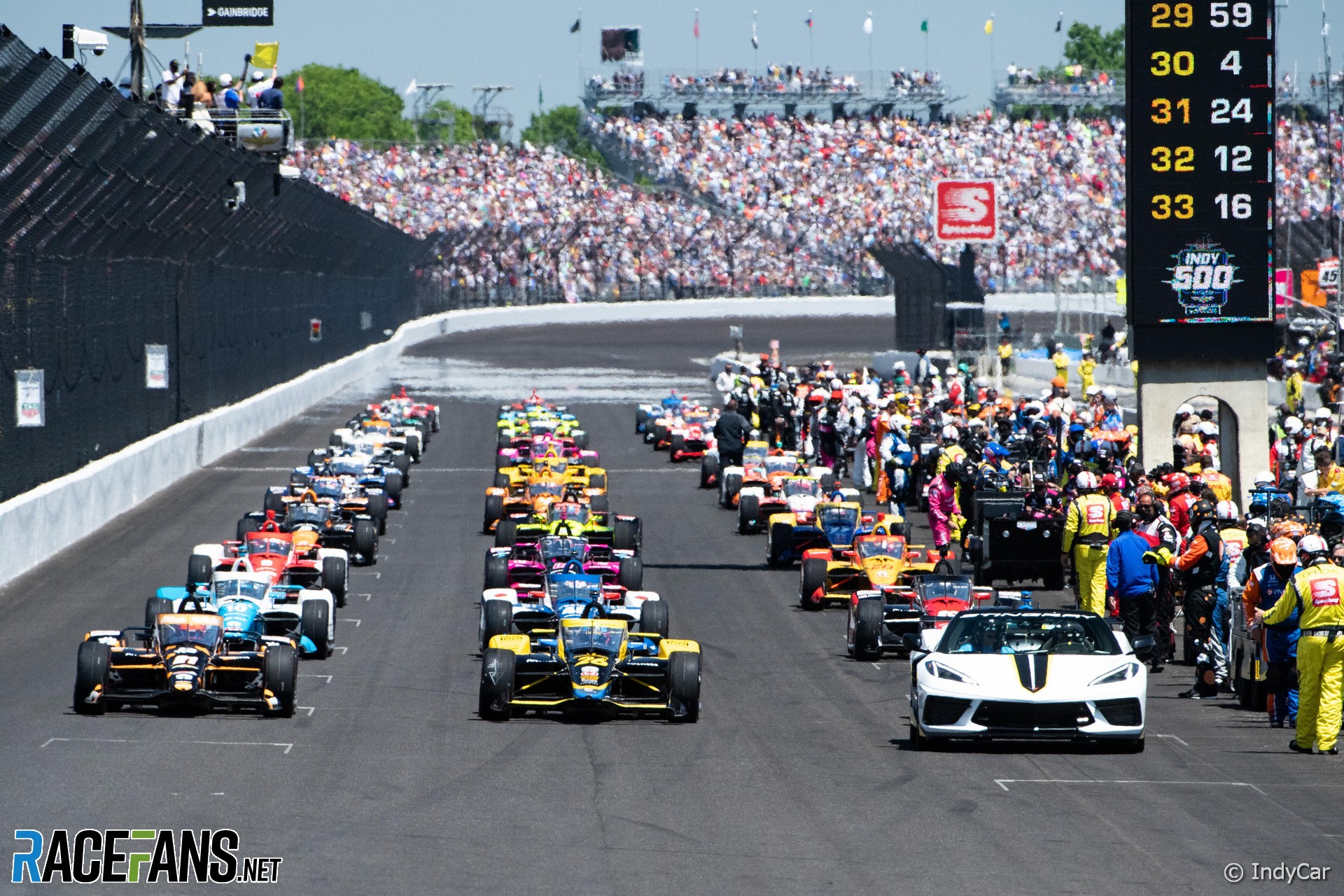 Qualifying speeds not seen in a quarter of a century, and the prospect of the first five-time winner in history, have grabbed headlines and captured the imagination of fans in the build-up for the 106th Indianapolis 500. Will the race itself live up to the hype?

A week of practice, plus two days of time trials, saw drivers approach speeds not seen at the ‘Brickyard’ since 1996 – an era of open chassis, a two-faction tyre war, and larger displacement engines with more turbocharging pressure on tap than today’s cars enjoy.

What was behind the speed rises which yielded the fastest pole position run in history? Engine suppliers Chevrolet and Honda have continued to extract as much horsepower and efficiency from their 2.2-litre turbo-V6 engines this year, with Chevy holding a slight advantage in straight line speed.

A new coat of track sealant was also applied to the racing surface during the off-season. But other than that, the gains have come from what teams have been able to tease from their machines in the third year since the Aeroscreen transformed the look – and handling – of current IndyCars.

Optional aerodynamic components are still on offer for teams, as they were last year, to aid the quality of racing. Initial weather forecasts predict a warmer race than last year, but nothing unbearably hot for the end of May. There’s a real prospect that the fastest race record could be beaten if the driving standards match last year and the race is run with few incidents.

There’s no shortage of storylines heading into the 2022 edition of the Indy 500, headlined by Helio Castroneves’ pursuit of an unprecedented fifth victory.

Castroneves, 47, rolled back the years in last year’s race, fighting off the challenge of eventual IndyCar Series champion Alex Palou to tie the record of four Indy victories held jointly with A.J. Foyt, Al Unser Snr, and Rick Mears. In doing so, he also gave IndyCar upstarts Meyer Shank Racing their first ever victory in the series.

But this year during time trials, Castroneves failed to make the cut for the new Top 12 shootout for pole position, qualifying 27th. In order to stand alone at the summit of Indianapolis 500 champions, he’ll have to win from the ninth row of the grid – a feat that hasn’t been accomplished since Johnny Rutherford won from 25th in 1974.

The other previous winner out of the elite eight that are in this year’s field, worth keeping an eye on, is the pole winner Scott Dixon, the man who broke Scott Brayton’s 26-year-old record for the fastest pole qualifying run in Indy history – with a four-lap average speed of 234.046mph / 376.661kph.

Yet, his sole Indy 500 win back in 2008 leaves a staggeringly lopsided ratio to the other 50 wins he’s taken over the course of his illustrious career. And in order to secure his legacy as one of the all-time greats of American open-wheel racing, Dixon will be motivated, now more than ever, to turn his record-setting qualifying run – at the head of the fastest Indy 500 field in history – into that long-awaited second trip to victory lane.

The other six past champions in the field should not be discounted, either. IndyCar points leader Will Power is going for his second Indy win. Takuma Sato has a chance not only to win his third Indy 500, but to give team owner Dale Coyne his first victory at Indy after four decades in the sport. Simon Pagenaud made the same switch from Penske to Meyer Shank that Castroneves did last year, and now he’s hoping for the same outcome. And 2016’s shock winner Alexander Rossi wants nothing more than a second win to re-energise his career.

To say nothing of Tony Kanaan, and fellow part-timer Juan Pablo Montoya, who are both hoping they can contend for one more Indy win before drawing their careers to a close. Of the two, it’s Kanaan – part of the Chip Ganassi Racing stable that dominated time trials – who stands the better chance at winning next weekend.

Alongside Dixon on the front row, represents two key pieces of IndyCar’s great youth movement of the 2020s – Palou, who finished a close second to Castroneves last year, and Rinus VeeKay, the fastest day one qualifier and the fastest driver out of the Ed Carpenter Racing stable. Palou’s status as an elite IndyCar driver was confirmed by winning the series championship last year, and he’ll hope to improve just one position in his third Indy start.

For 21-year-old VeeKay, a win at the 500 would see the young Dutchman break Troy Ruttman’s 70-year record as the youngest winner in Indy history, and certainly, he would emerge from the shadow of some of his peers such as Palou, Pato O’Ward, and Colton Herta.

And speaking of O’Ward and Herta – two IndyCar drivers with current Formula 1 ties and ambitions – O’Ward will spearhead a three-car effort with Montoya and Felix Rosenqvist, aiming to bring the McLaren name back to victory lane for the first time since 1976. ‘Hooligan Herta’, who’s not had a great deal of fortune in the 500 in his brief career, will go from the ninth row of the grid alongside Castroneves and IndyCar’s latest first-time winner and 2021 Indy 500 rookie of the year, Scott McLaughlin.

This year, seven drivers will compete for Indy 500 Rookie of the Year honours, the biggest rookie class at the race since 2014. It’s an eclectic group of Road to Indy graduates Kyle Kirkwood, David Malukas, and Devlin DeFrancesco, and former F1 prospects Callum Ilott and Christian Lundgaard.

Then, there’s the two ‘super rookies’. International audiences have been captivated by Romain Grosjean’s transition from F1 to IndyCar last season. This year, Grosjean makes his Indy 500 debut as the fastest rookie in the field – and the highest-qualifying driver from the otherwise struggling Andretti Autosport fleet.

Seven-time NASCAR champion Jimmie Johnson’s laborious struggles of transitioning to IndyCar in the sunset of his racing career will be worth it, if the 47-year-old Indy rookie can capture lightning in a bottle and win the race on his debut. He may have nearly wrecked in the second day of time trials, but as a Ganassi driver, Johnson has the team behind him to make his dream come true.

Those drivers will be trying to win the race for the first time, but a number of veterans have been coming to Indy for years in search of their first encounter with the Borg-Warner Trophy. Among them, Indiana native Ed Carpenter is in the race for the 19th year, the most of any driver that has yet to win the race. His young team mate Conor Daly, also a local favourite, led the most laps one year ago but couldn’t quite close the deal, and will try again in his ninth start.

Graham Rahal and Marco Andretti hope to continue their families’ Indy legacies – Rahal trying to match his father’s 1986 win, Andretti trying to win the race his father Michael never could. JR Hildebrand’s agonising near-miss in 2011 could be the epithet of his legacy unless he’s able to shock the world and win in his twelfth try. And now, 31-year-old Josef Newgarden, a two-time IndyCar Series champion, is on the clock, trying to add the one missing piece to his hall of fame calibre career in his eleventh Indy 500 start – and his sixth as a driver for Team Penske.

Out of all 33 cars, the five drivers from Ganassi – including fourth-year veteran Marcus Ericsson, who’s been strong all week – have to be the favourites based on qualifying form. Penske had another anonymous qualifying session, but they along with Andretti Autosport cannot be counted out. Ed Carpenter’s team always has the speed, but can they finally put it together when it counts the most?

The prospects for an all-time great Indy 500 are in the books, but certainly, given the surging speeds in the days leading up to Sunday’s race, our hope is that every driver, every member of every crew, and every spectator – in the first full-capacity Indy 500 since 2019 – can return home safely when all is said and done.

Become an RaceFans Supporter today and browse the site ad-free.Sign up or find out more via the links below: