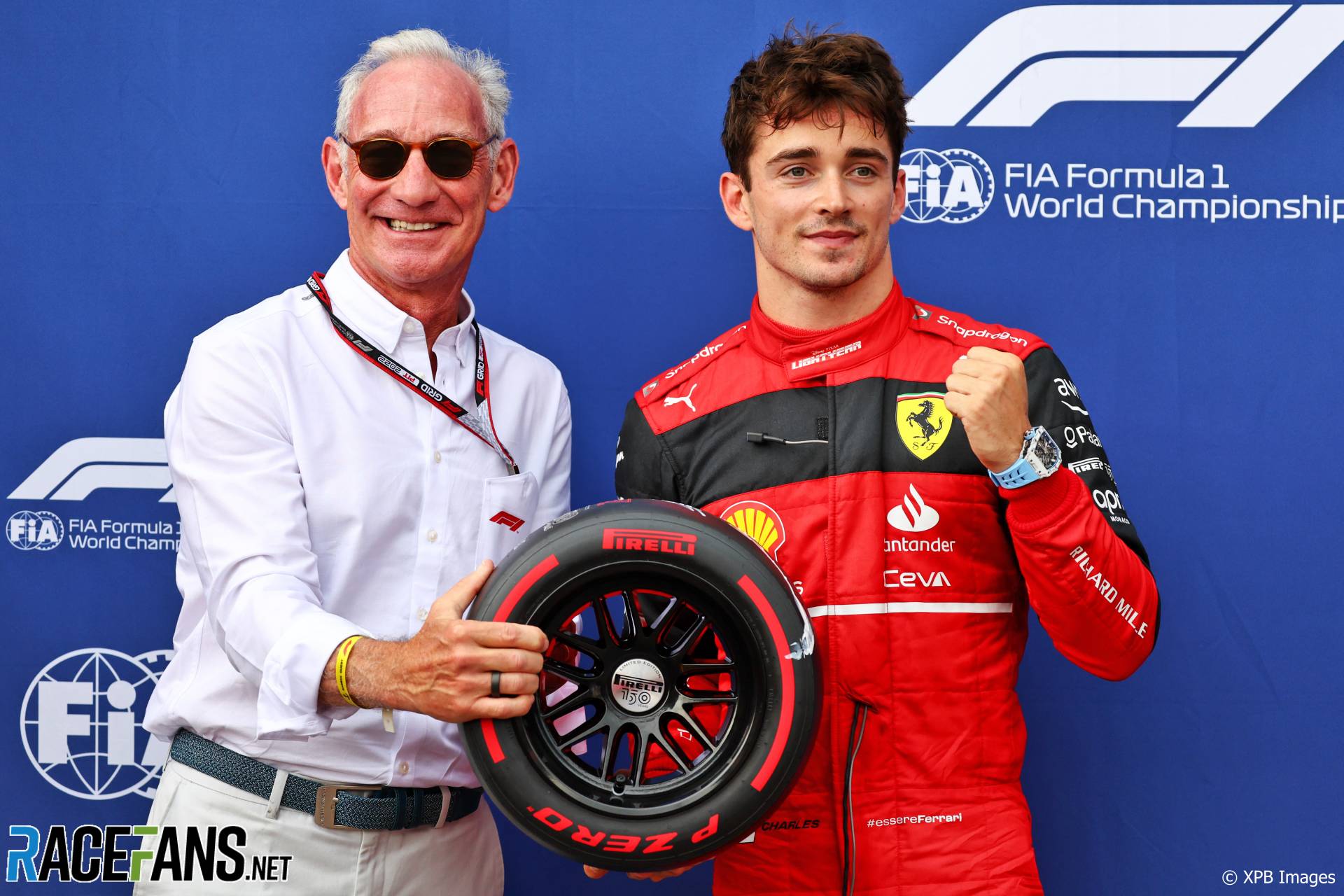 Charles Leclerc will start his home grand prix from pole position for the second year in succession ahead of team mate Carlos Sainz Jnr.

The Ferrari drivers will start ahead of the Red Bulls of Sergio Perez and Max Verstappen after Perez crashed at Portier on his final flying lap, resulting in a crash with Sainz that left the track blocked and effectively ended the session.

Lando Norris will start fifth for McLaren, ahead of George Russell and Fernando Alonso, who also crashed at Mirabeau in the closing minutes.

After the three practice sessions had all taken place under clear skies and bright sunshine over the city of Monte Carlo, the clouds had drifted over by the time the green light at the end of the pit lane signalled the start of the first phase of qualifying.

Sergio Perez was the first of the Red Bulls to set a lap time, posting a 1’14.369 to go quickest, but was immediately pipped by team mate Max Verstappen, who went 0.074s quicker. Fernando Alonso briefly jumped to the top of the standings with his first flying lap of the hour, before Perez improved to reclaim the fastest time by just over a tenth.

Carlos Sainz Jnr set an identical lap time to Perez to go second quickest, before Leclerc moved into the 1’12s for the first time with a 1’12.939. He later improved by just under four tenths, with Sainz also going faster to go second.

With five minutes remaining, the drop zone consisted of two Aston Martins of Lance Stroll and Sebastian Vettel, the two Alfa Romeos of Zhou Guanyu and Valtteri Bottas, plus Nicholas Latifi’s Williams, with Yuki Tsunoda at risk of elimination in 15th. Stroll moved himself to 11th, knocking Tsunoda into the drop zone. Latifi also improved to go 16th, but that left him still at risk of elimination.

Vettel bettered his time too, moving Esteban Ocon’s Alpine and Daniel Ricciardo’s McLaren down into the drop zone in 16th, just behind team mate Lando Norris. Then, with two-and-a-half minutes remaining, the session was stopped when Tsunoda clipped the inside barrier at the Nouvelle Chicane, causing an immediate puncture to his left-front tyre and knocking the barrier slightly out of alignment. Tsunoda was able to recover to the pits and the barrier was soon fixed.

Once the session resumed, a large queue of cars formed at the end of the pit lane as the field looked to get one final lap in before time expired. Due to the queue, Pierre Gasly, Lewis Hamilton, Valtteri Bottas and Zhou Guanyu all missed starting a lap before the chequered flag flew. For the luckless Gasly, whose team mate had triggered the red flag, the lights turned from green to red mere tenths of a second before he reached the line.

Ocon, Ricciardo and, ironically, Tsunoda all improved by enough to move them out of the drop zone and into safety, but at the cost of Alex Albon and Gasly who all fell into the bottom five, with Gasly unable to improve his own time after missing the opportunity. Stroll was also eliminated in 18th – much to his disgust – with Latifi knocked out in 19th and Zhou last in 20th, having also been unable to set a final lap time after the red flag.

The second session began with intense competition likely over earning a place in the third and final phase of qualifying. Red Bull and Ferrari did not waste time, heading out onto the circuit to set their first lap times of the session.

Perez was the quickest of the four, less than half a tenth of a second ahead of the Ferraris of Sainz and Leclerc behind him. Verstappen’s first effort was only good enough for fourth, almost half a second behind his team mate.

Leclerc then jumped to the top of the standings with the fastest overall time of the weekend, breaking into the 1’11s for the first time with a 1’11.864. However the Ferrari driver failed to spot he was summoned to stop at the FIA weighbridge his return to the pits, and his mechanics had to push his car back up the pit lane for his car to be weighed.

With five minutes remaining, the drop zone consisted of Kevin Magnussen, Valtteri Bottas, Yuki Tsunoda, Daniel Ricciardo and Mick Schumacher slowest in 15th having not yet set a truly representative time. Ricciardo improved, but not by enough to move him out of the drop zone. Magnussen moved out of danger, but team mate Schumacher could only manage 13th, sealing his elimination.

Ocon and Vettel had both fallen into the drop zone but manged to go quicker on their final laps, dropping Tsunoda and Magnussen out of the session. Bottas improved on his final lap, but his effort was only good enough to jump from 15th to 12th, and the Alfa Romeo driver was also knocked out at the chequered flag.

Vettel, Russell and Alonso just squeezed through into the top ten to secure their places in the final shoot-out for pole position.

The most important 12 minutes of qualifying of the entire season got underway with Monaco’s own Charles Leclerc leading the field out of the pit lane ahead of the two Mercedes of Hamilton and Russell, with Sainz behind them. Sainz was told he would be going for an immediate push lap, rather than a preparatory lap, meaning he would have to pass Russell during his flying lap.

Leclerc’s first effort was a 1’11.376, with Sainz unable to match his team mate, two tenths slower with his first lap of the session. Then it was the Red Bulls’ turn to put in their first flying laps, with Perez yet again quicker than Verstappen, but the pair both unable to match Leclerc’s provisional pole time and having to settle for third and fourth.

After a preparatory lap, the Mercedes of Hamilton and Russell could only manage sixth and seventh, respectively. The pair were beaten by Norris in the McLaren, who took fifth place after his first lap, until he was beaten by Alonso, who went two tenths quicker than Norris’s first time.

With five minutes remaining, Red Bull sent out Verstappen to take advantage of a clear track on a fresh set of soft tyres. But a poor first sector saw him drop two tenths to Leclerc, before failing to even improve on his own first lap by the time he had crossed the finish line. Meanwhile, both Norris and Russell improved to jump ahead of Alonso.

Leclerc was unhappy to be behind the two Mercedes for his final effort, but managed to give himself enough space to start his lap. However, he would not finish his lap after Perez spun at Portier and was collected by Sainz who rounded the corner directly behind him.

The accident left the track completely blocked approaching the tunnel and the session was unsurprisingly stopped with a red flag. In a separate incident, Alonso crashed his Alpine into Mirabeau, leaving his car nose-first into the barriers.

That secured Leclerc his fourth consecutive pole position and his second in a row at his home grand prix. Sainz will line up alongside his team mate in an all-Ferrari front row, with Perez ahead of Verstappen on the second row.

Norris will start fifth for McLaren, ahead of Russell’s Mercedes in sixth. Alonso starts ahead of Hamilton in seventh, with Vettel and Ocon completing the top ten.

RaceFans is run thanks in part to the generous support of its readers. By contributing £1 per month or £12 per year (or the same in whichever currency you use) ou can help cover the costs of creating, hosting and developing RaceFans today and in the future.