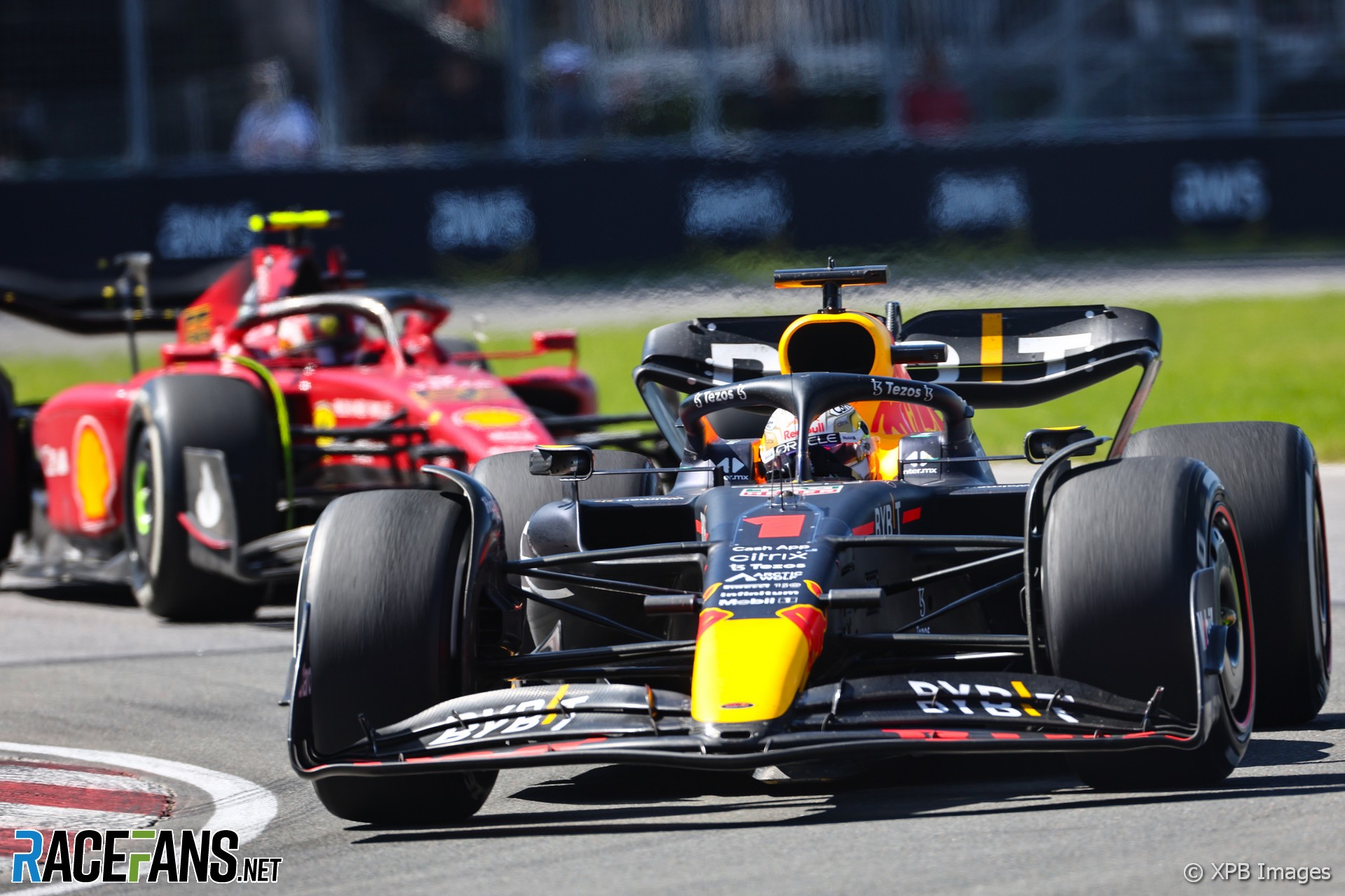 Carlos Sainz Jnr said he might have been better off switching to soft tyres for the final stint of the Canadian Grand Prix, following his unsuccessful attempt to pass Max Verstappen for victory.

The appearance of the Safety Car with 21 laps to go handed Sainz the opportunity to pit for fresh rubber and resume the race immediately behind Verstappen. Ferrari put him on a new set of hard tyres, which were six laps fresher than Verstappen’s.

However Sainz pointed out that as the race did not restart until there were 16 laps remaining, he might have been better off switching to the soft tyre compound. He did not have any fresh medium tyres left.

“I was thinking about it now,” he admitted after the race. “The Safety Car stayed out for a bit longer than maybe what I thought or what the team thought.

“By time it was green flag, there was only 16 or something laps left, which was the right number of laps to maybe try and put on a soft and try to overtake Max on the warm-up phase of the hard.

“Now, it’s easy to say. At the time, with still 20-something laps to go, the hard was definitely the fastest option to the to the flag, especially knowing that it was a bit of a fresher hard to Max. It’s a shame.”

Before the Safety Car came out Sainz held a 7.7 second lead over Verstappen, who was catching him on fresher tyres.

“I felt like without the Safety Car he wouldn’t have caught me easily,” said Sainz. “I think it would have been a good battle at the end.

“With him catching up on me, I was ready to hang it out there until the chequered flag. I was in good pace, I was still doing 17.3s, and I think we could have made it to the flag.”

Sainz said he risked everything to pass Verstappen at the end of the race but didn’t have enough of a pace advantage over the Red Bull to get by.

“It was a tough, intense battle with Max,” he said. “I knew I had a bit of pace delta on him from the whole race and I think it was five, six laps fresher [on] tyres. But to overtake around here you need to be more than those two or three tenths.

“I gave it all. I was risking everything over the kerbs, close to the wall and having a few moments out there in the dirty air. I got close a couple of times but not enough to really throw a move down the inside anywhere. But I can tell you I was pushing.”

The narrowness of the Circuit Gilles Villeneuve made it difficult for Sainz to stay close enough to Verstappen to attack in the DRS zones.

“Without the DRS it’s impossible, because the DRS is still affecting you quite a lot, especially at this track that you cannot do different lines. It’s all chicanes that you have nowhere to put your front wing to avoid the understeer and the overheating of the tyres.

“But even like that I was happy and confident to be in the dirty air and managed to stay, even overheating, 16 laps in DRS. I could close, I think in lap three, as soon as the DRS opened. It was all about cooling the tyres and regaining the battery to try and really drain it when catching him.”

Despite failing to wrest the win away from Verstappen, Sainz says his car’s performance bodes well for the rest of the season.

“I left everything out there. Compared to a Red Bull today, we were quicker I think the whole race. First time the season that I think I can say that I was fastest man on track, which gives me some confidence and hope for the next races.

“But two or three tenths is not enough to pass a Red Bull, you need more like five, six tenths of pace delta if you really want to have any chance of passing Max.”