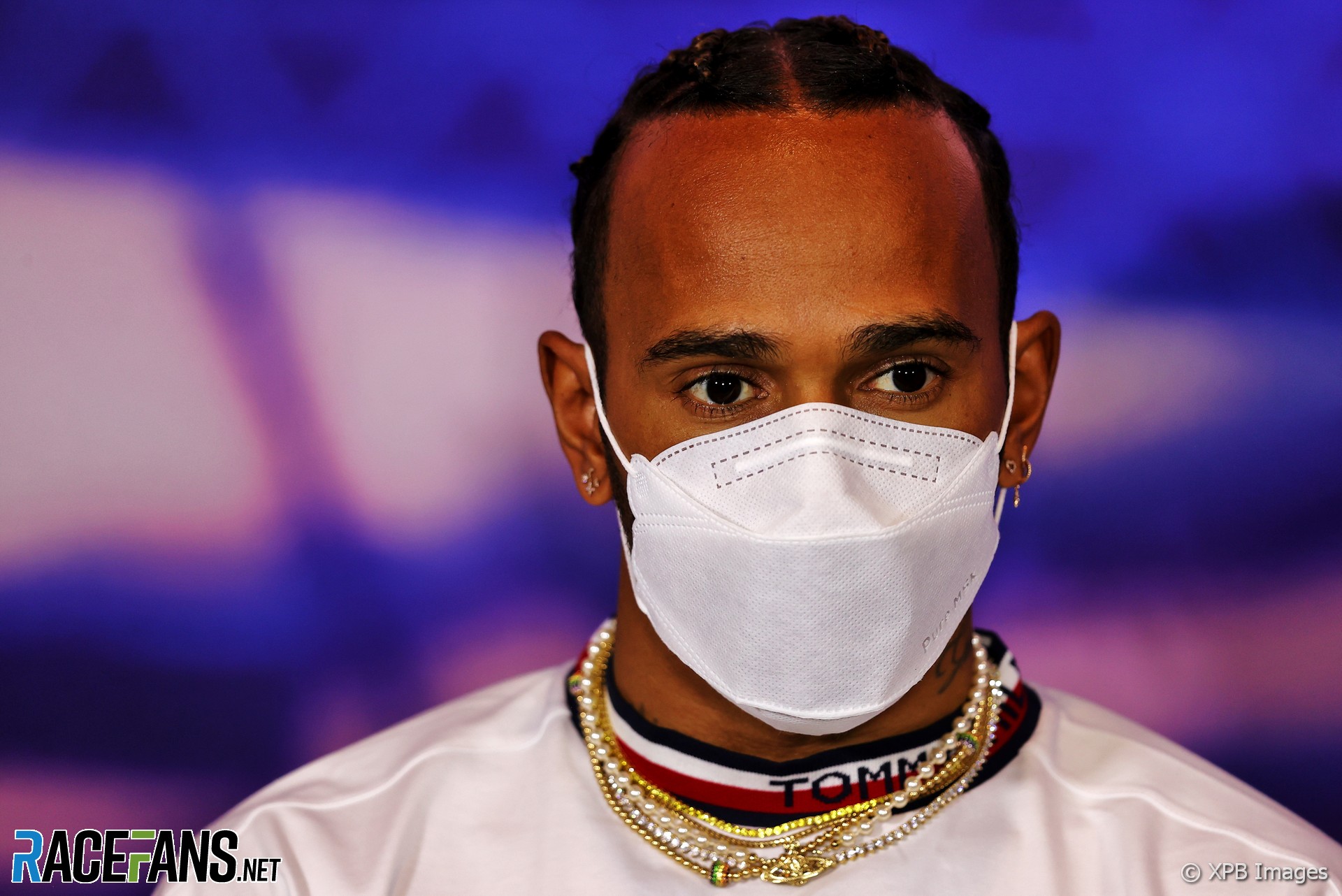 Lewis Hamilton has claimed the views of some older Formula 1 figures should not be shared when they promote discrimination.

The Mercedes driver made his comments after three-time world champion Nelson Piquet was condemned for describing him using a racist term in a video which circulated on social media this week. Piquet has been barred from the F1 paddock as a result of his comments and is being stripped of his honorary membership of the British Racing Drivers’ Club.

Formula Formula 1 CEO Bernie Ecclestone came to Piquet’s defence in a televised interview this morning, claiming Hamilton should have “brushed off” the comment. He also restated his praise for Vladimir Putin, despite the Russian president waging a war on Ukraine which has already killed thousands this year.

Speaking in the FIA press conference ahead of this weekend’s British Grand Prix, Hamilton said he was “incredibly grateful to all those that have been supportive within the sport, particularly the drivers” following Piquet’s comment. Several drivers publicly expressed support for Hamilton on social media after the remarks came to light.

Hamilton said the comments were typical of the abuse he continues to receive despite F1 having launched an anti-discrimination initiative in 2020.

“It’s been two years since many of us took the knee at the first race in Austria and of course we’re still faced with challenges,” he said. “I’ve been on the receiving end of racism and criticism and the negativity in archaic narratives for a long, long time, and undertones of discrimination. So there’s nothing really particularly new for me.”

He said F1 needs to consider “the bigger picture” and question why it gives prominence to past figures of the sport who do not share its current values.

“I’m not really sure, I don’t know why we are continuing to give these older voices a platform,” he said. “Because they are speaking upon our sport and we’re looking to go somewhere completely different. And it’s not representative, I think, of who we are as a sport now and where we’re planning to go.

“We’re looking to grow in the US and other countries, South Africa, and grow our audience. We need to be looking to the future and giving the younger people a platform that are more representative of today’s times and who we are trying to be and the direction that we’re going. So it’s not just about one individual, it’s not about just that one use of that term, it’s the bigger picture.”

Hamilton urged those in the sport to take “real action” to promote inclusion and go beyond simply criticising discriminatory language.

“Everyone’s PR people have already a script for something like that. Crisis management. It’s not enough. Now it’s about actual, real action. We’ve got to actually start acting.

“It comes back down to F1, to the media, we should not be giving these people a platform. These old voices, whether they’re subconscious, or consciously do not agree that people like me, for example, should be in a sport like this, they do not agree women should be here. Discrimination is not something we should be projecting and promoting and giving a platform to create and divide people.

“More than ever – we’re living such a difficult time in the world – we need people to be bringing people together. We are all the same and it is not helpful the comments that we’re seeing from these people.

“In the last couple of weeks I don’t think a day’s gone by where there’s not been someone from some of the older [generation] that have not really been in our sport or relevant in our sport for decades, trying to say negative things and trying to bring me down. But I’m still here, I’m still standing strong and I’m focussed on my work and really trying to push for diversity inclusion within our organisation.”

Three-times world champion Jackie Stewart recently gave an interview in which he said he would like to see Hamilton retire from F1. Asked whether he’d lost respect for past drivers such as Piquet and Stewart in light of their recent comments, Hamilton said: “I’ve always tried to take the high road. I’ve always tried to be respectful to these individuals.

“And again, just going back, I think it ties back to what I was saying before is why do we give these guys a platform? They’re not with the times and they’re clearly not willing to change and these undertones of discrimination and micro-aggressions are just, in today’s world, not helpful and this creates more divide.

“I love how Michelle Obama says ‘when they go low, go high’ so I try to continue to do that. I’m inspired by people like that. As I said, I’m still here, it’s not going to deter me from doing what I think is right and doing what I love, which is working in this sport.”

The seven-times world champion launched The Hamilton Commission in 2020 to examine and address the reasons why black people and other groups are under-represented in motorsport. He has urged F1 teams to sign up to a diversity and inclusion charter, but says some have not yet agreed to support it.

“I’ve been on calls with all the F1 teams who all agreed to be a part of this F1 charter and it’s still not signed, it’s still not underway. But no more can we be amplifying these voices that are just creating that divide out there. We’ve got people high up in governments that just create more and more divide. America’s just gone back 50 years. With everything that’s happened here in the UK, we’ve gone backwards and people are really struggling out there so we’ve all got to pull together.”

Hamilton said he was astonished by Ecclestone’s comments in support of Putin and claimed those who aired his views were promoting division.

“There needs to be some accountability,” he said. “You know what you’re going to get with that.

“I don’t know what their goal is, if they were seeking to create divide. Here in the UK we don’t need any more of it.

“To hear from someone that ultimately believes in the war, the displacement of millions of people and the killing of thousands of people, the person that’s doing that, they support them. I mean, that’s beyond me. And I can’t believe that’s what I heard today.

“Why? We don’t need to be supporting that anymore. We’ve got to deal with the future, we need more positivity in the world.”

Piquet’s comments emerged shortly after Formula 1 was rocked by another racism row. Red Bull sacked its Junior Team member Juri Vips, who shared a track with Hamilton during practice for the Spanish Grand Prix last month, after he used a racial slur in a live video game stream.

Hamilton said the episode shows “we are living still within the world, with still discrimination throughout the world. So it’s still clearly all around us.

“You see it on social [media], you see it in micro-aggressions that continue to come out. And enough is enough.

Vips’ Formula 2 team Hitech has not taken any action against its driver and said he will be allowed to complete the season with them. F2 described the decision as “surprising and not one we would have taken”.