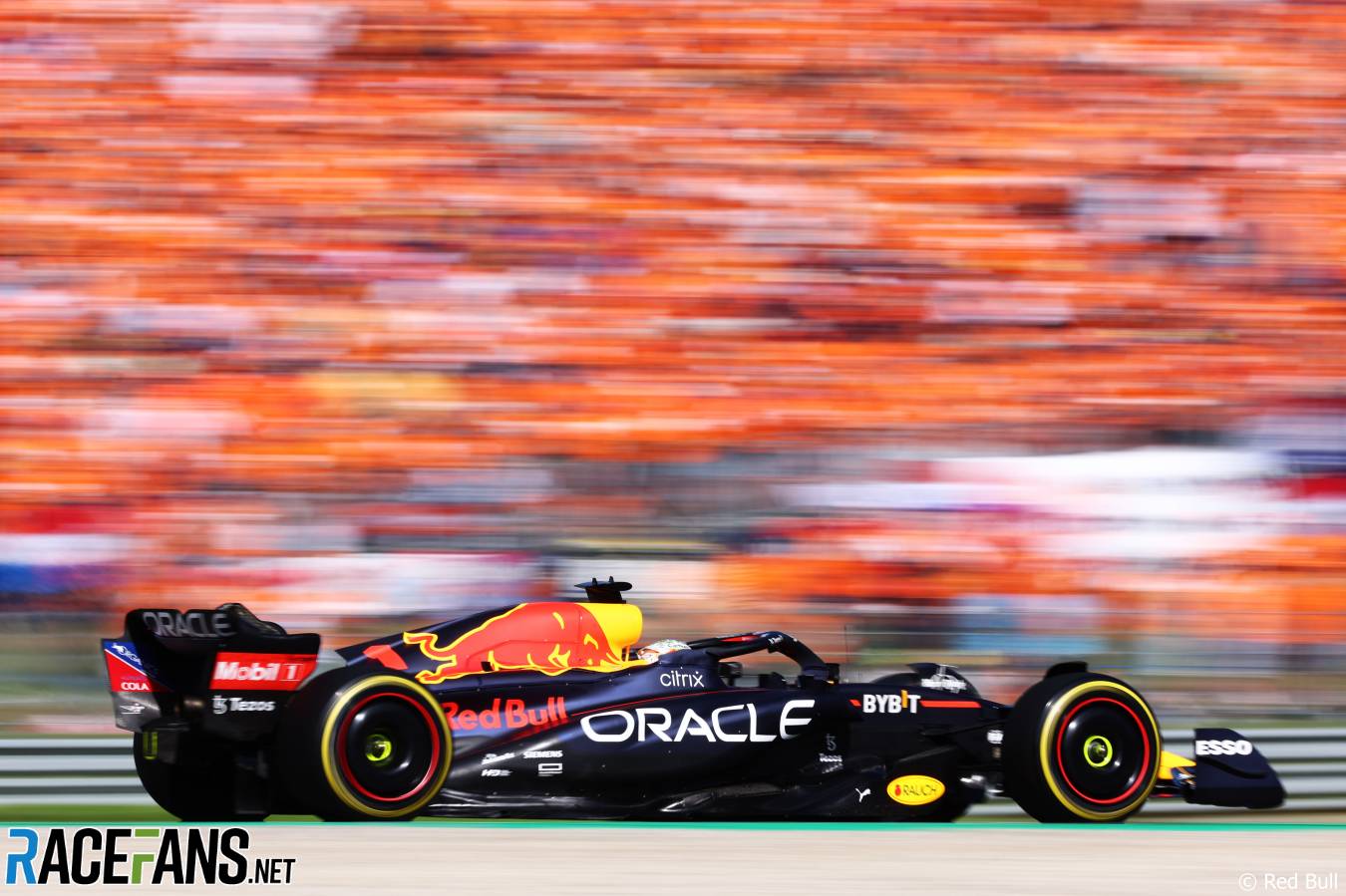 Max Verstappen secured pole position for the Austrian Grand Prix with a comfortable victory in the sprint race ahead of Charles Leclerc and Carlos Sainz Jnr.

The Red Bull resisted an attack from Sainz at the start and was never troubled for the 23 laps that followed. Leclerc eventually passed Sainz to retake second on the grid after losing a place to his team mate off the line.

George Russell will line up fourth again for Sunday’s grand prix, ahead of Sergio Perez who recovered from 13th on the sprint race grid to finish in fifth place.

As the field pulled away from the grid on the formation lap, Fernando Alonso was left up on his jacks with his tyre blankets still on. Unable to pull away, the Alpine was wheeled back into the pit lane.

Then, as the field lined up for the start, Zhou Guanyu suddenly lost drive and failed to form up on the grid. An extra formation lap was called to allow the Alfa Romeo to be cleared, however Zhou managed to restart his car and recover to the pit lane.

When the sprint race eventually started, Verstappen held the lead off the line but Sainz got ahead of team mate Leclerc to take second place. Back in the pack, Pierre Gasly was spun around after contact with Lewis Hamilton, who was squeezed between the AlphaTauri and the Williams of Alexander Albon. Gasly was able to continue, but he dropped towards the back of the field ahead only of Zhou, who had managed to take the start from the pit lane.

Verstappen began to pull away from the Ferraris out front. Hamilton passed Albon for tenth, before Albon began scrapping with Lando Norris over 11th, resulting in the McLaren bouncing over the sausage kerb on the exit of turn three as Albon resisted Norris’s attack – the stewards later handing Albon a five-second time penalty for forcing the McLaren off the track.

With Leclerc slowly falling back from Verstappen, he then came under attack from his team mate for second place. Sainz dived down the inside of Leclerc into turn three, but Leclerc cut back to keep the position. Sainz tried again into turn four around the outside, only for Leclerc to hold him off and retain second place.

Having lost position to the McLarens, Albon then found himself under pressure from the Aston Martin of Sebastian Vettel for 13th. Vettel tried to pass around the outside of the Williams at turn six, but the pair collided, sending Vettel spinning into the gravel. Vettel managed to reverse out of the gravel and back onto the track, but had dropped to the very rear of the field.

Mick Schumacher came under heavy pressure from Hamilton on the run to turn four, but the Haas driver positioned himself well enough to repel the Mercedes. Eventually, Hamilton passed Schumacher into turn four on lap 21 to move up into eighth.

Out front, Verstappen was under no pressure from the chasing Ferraris and duly checked off the final laps to take the chequered flag and secure pole position for Sunday’s grand prix. Leclerc finished 1.6 seconds behind his championship rival, while Sainz took third almost four second behind his team mate.

Russell will start fourth on the grid, over seven seconds adrift from Sainz. Sergio Perez recovered from 13th on the grid to take fifth for the grand prix, ahead of Esteban Ocon and Kevin Magnussen in seventh.

Hamilton took eighth and the final point ahead of Schumacher. Valtteri Bottas rounded out the top 10 but will start from the back of the grid tomorrow after a power unit penalty. Norris will therefore be promoted to 10th ahead of team mate Daniel Ricciardo.