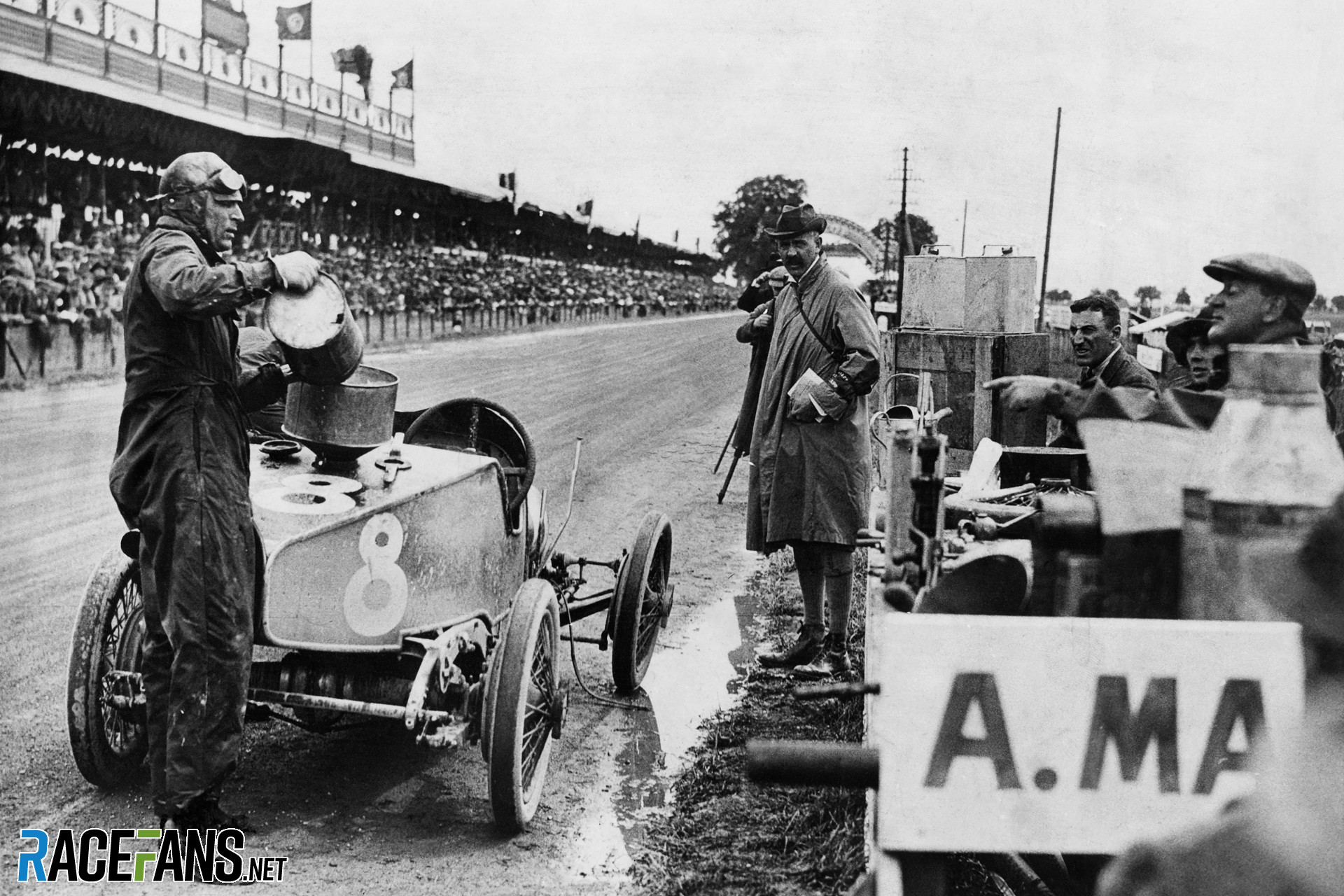 In the round-up: Sebastian Vettel will perform another historic demonstration run this weekend in a car using sustainable fuel.

The Aston Martin GP was driven by Clive Gallop and Louis Zborowski during the 1922 French Grand Prix at Strasbourg. Both cars failed to finish the race due to engine problems.

As with Vettel’s run in his 1992 Williams-Renault FW14B at Silverstone, the Aston Martin will run on sustainable fuel. It has been developed by P1 fuels with Aston Martin title sponsor Saudi Aramco.

“It was great to find out that this car is still alive, it still runs and is in such good shape,” said Vettel. “It’s crazy to imagine how long it’s been around but great to see that it’s still there. I’m very much looking forward to getting behind the wheel. I’m guessing it will be very different to what I’m used to.”

“People sometimes forget it’s a human being inside” crashes – Russell

“I think when you’re on the other side of the barrier, whether it’s football, whether it’s motorsport, whatever it is, people sometimes forget it’s a human being inside that,” said Russell. “We’re all human beings: Drivers, engineers, media, fans.

“There’s no justification to boo somebody for any reason or to jeer when we’re all risking our lives here. We know just recently the dangers that involved with motorsport.”

Ricciardo feared spacehopper incident would put Norris out of race

Daniel Ricciardo says he felt like a misbehaving schoolchild when he accidentally hit team mate Lando Norris in the face with a space hopper at the British Grand Prix.

Footage of the incident was widely shared on social media. Ricciardo admitted he felt instant dread Norris might be hurt too badly to race.

“I will say that the space hopper, it literally took me back to being at school,” Ricciardo told Joe. “Like at school, as soon as you do something you know is wrong and it’s like you instantly have like, ‘oh no,’ like instant regret. It’s like, why did I just do that? And it was kind of the same feeling.

“So it took me back to like if I was doing something silly at school, which you know is going to get back to the teacher or the principal. It was the same.

“As soon as it left my hands I was like ‘oh, no,’ he’s literally going to fly backwards and injure himself. And I’ve done it in front of his home crowd. And the British fans that I have are now going to absolutely hate me and Lando’s going to be hurt and not be able to race.

“All these things like quickly ran over my head. So as soon as it left my hand I went into instant regret mode and oh my gosh, luckily someone was watching, saying Lando will not be hurt and everything will be okay.”

Zhou has “unfinished business” after run of bad luck

Zhou Guanyu said that he “cannot wait to get started” at Paul Ricard this weekend after his career-best finish in Canada was followed by a pair of no-scores.

“There is a bit of a feeling of unfinished business after the last back-to-back,” said the Alfa Romeo driver. “I think we definitely did not get what we deserved in the last couple of races.

“We have a chance to do well here, and get back to the performance levels we have shown in Canada, scoring the points we have been missing for a few races now. The competition, as usual, will be high, but we are ready to get on track and give our very best.”

Last weekend I had one of the biggest crash of my career so far and luckily no major injuries. It has been a difficult weekend in general and finally the crash just made it worst. About the contact, unfortunately I couldn’t do much and before I even realized I was already.. 👇🏽1/2 pic.twitter.com/EhLpomYOTo

Inspired by my father’s design, the man who made it all happen, and where it all started.

Visited Igora Drive to test the newest config built for F1 Race in 2023.
Seems that the previous one & this config are like two different tracks. The last, third sector is especially impressive: was even somewhat confused, cause the first time I simply didn't get where to turn⬇️ pic.twitter.com/vJ64kzOQ1p

The @FIA has confirmed no changes to the DRS zones at Paul Ricard for this weekend's #FrenchGP:https://t.co/0kKVtQdSXY#F1

For me our pace has been really good this season,' Doohan says. 'Just weren’t able to get any good points on the board for the first three rounds, but we were always qualifying on the front two rows and had good pace.

75 days, 13 hours, 25 minutes. When the light at the end of Circuit Paul Ricard’s pit-lane turns green this Friday to commence W Series’ practice session for the fifth race of the 2022 season in south-eastern France, that is how long it will have been since Jamie Chadwick overtook Emma Kimiläinen for the lead of the season-opener in Miami, USA.

At the beginning of the season I would have expected most teams using first practice driver change here. At that point Paul Ricard wasn’t supposed to hold F2 race but the race was added to the calendar after Russian GP was understandably called off.

Sometimes drivers have done first practice sessions on the same weekend as they drive in FP2 but I’m not sure it’s optimal preparation for the weekend.

There are five races remaining in the calendar where F2 is not in the programme: Singapore, Suzuka, Austin, Mexico City and Interlagos. Of those Singapore is a circuit where regular drivers need as much driving time as possible and Interlagos has a sprint which means young drivers won’t be considered for first practice. So there would be three options, I think Vasseur mentioned that in one interview recently.
@bleu