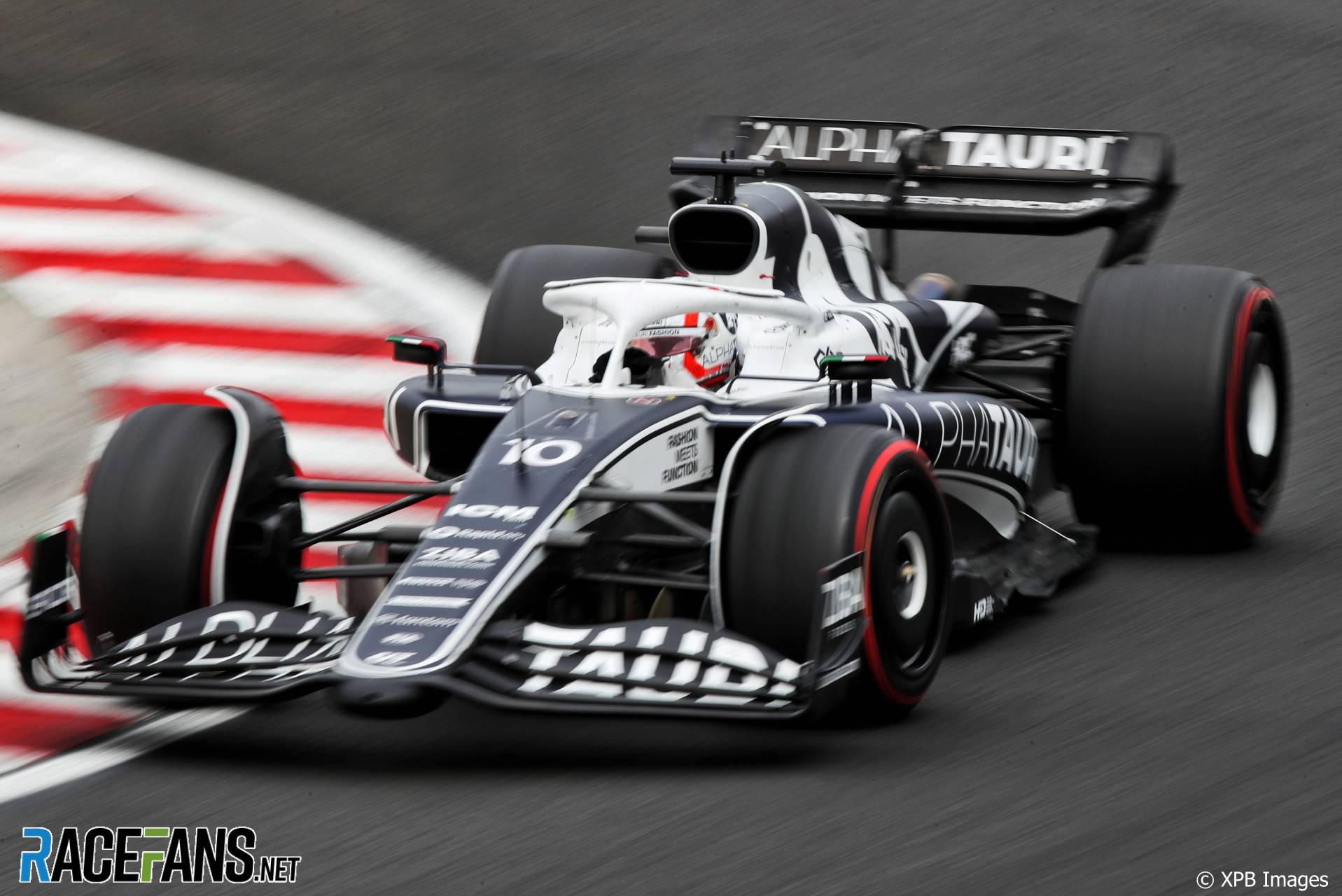 In the round-up: Pierre Gasly says AlphaTauri are still struggling to compete for points despite their recent update.

Gasly started from the pit lane in Hungary due to a power unit change. He recovered to finish 12th, but admitted the team is still lacking performance.

“The last few weekends obviously have been quite difficult and starting from the pit lane now we decided to revert on a couple of the things we did, try to get back to what we did earlier this season. I think there were actually a lot of interesting things.

“In terms of performance I think we showed a slightly better pace than we used to do on Friday and we showed in the last couple of of weekends. So definitely some interesting data.

“From the pit lane I’m pretty pleased to make it back to P12. At the moment McLaren and Alpine are just too fast for us and Aston on race day seem to pick up quite a bit of pace as well. Still I would say a positive Sunday even though we are quite far from the position we’d like.”

Teams stay in Hungary to test

Mercedes and Aston Martin weren’t in a hurry to depart the Hungaroring. The two teams will test prototype slick tyres for Pirelli on Tuesday and Wednesday.

Sam Bird broke his hand on the first lap of the London Eprix, yet finished the race and scored points.

The Jaguar driver did not attend media duties after the race. His team confirmed that, on medical advice, he had gone for precautionary hospital checks on a hand injury. He was involved in several bumping incidents during the first lap.

Jean-Eric Vergne, Oliver Rowland, Dan Ticktum and Nick Cassidy retired on the first lap of the second London EPrix. Oliver Askew also retired later after being involved in the incidents.

Cassidy was seen slowing behind the safety car after Rowland and Ticktum’s retirements called it out. He blamed his early exit from the race on Maximilian Günther.

“The first seven corners, I was hit seven times by Günther,” said Cassidy. “Fair play for persistence, he obviously keeps at it, doesn’t give up. Fair play.”

Rowland’s retirement came after going semi-airborne, his car lifting between Askew’s and the wall on the ramp section. However, he said that the worse damage was when he landed and then subsequently hit Vergne, who was crawling back to the pits with a radiator problem.

“When you’re sitting in the seat you just see the sky and think ‘hmm, where’s this going’ but no, I was fine, it wasn’t too big an impact to be honest,” said Rowland. “I came out of turn five and he already squeezed me a bit into the wall and as he was [alongside me] he kind of picked up the front, so I was going towards the wall and then the wall picked me up in the air.

“So it wasn’t 10-out-of-10 bad on his side, it was all just a bit unfortunate, just tops off the weekend really,” Rowland concluded.

Nissany could become third F2 driver to get ban

Formula 2 is close to banning a third driver for reaching 12 penalty points in a season. Yesterday Oliver Caldwell became the second driver to reach a ban and will sit out the next round at Spa-Francorchamps. Amaury Cordeel was previously banned from the Silverstone round.

Now Williams junior driver Roy Nissany has reached 11 penalty points, meaning he will earn an automatic ban if he collects one more. He received two after yesterday’s feature race at the Hungaroring when the stewards judged him entirely responsible for a collision with Roberto Merhi.

“The stewards determined that car 16 [Nissany] made an inside pass attempt at the entrance of turn one,” they explained. “The brakes locked briefly and car 16 [Merhi] made contact with car 15 hard enough that the right rear suspension was damaged. Car 15 is judged wholly responsible for the collision.”

'It’s the same in football where people get stadium bans, that doesn’t mean that someone in five years’ time won’t do it again,” said Verstappen said. “They might risk a stadium ban, (because) some people just don’t think, or just do what they like.'

Steiner interview: Russian sponsors of Haas always paid their bills - but we had to change (The Telegraph)

'It was like, guys, maybe next year you don't want to be here. They were already quite demotivated in 2020.'

Leclerc's crash in France is rumoured to have provoked suspicions at Mercedes over Ferrari's throttle system.

…"We don't want to give any kind of room because the sport, in this case Formula 1, can show that is a competition. In competition you can do good, you can do well, but you need to be respectful. Every time."https://t.co/IfHbojqivw #F1 #HungarianGP

Formula E’s race weekend in London left something to be desired for Martin:

As a member of the home crowd, it was an enjoyable victory. However, as the second Formula E race I’ve attended (after the EPrix in Battersea Park) I was a bit disappointed by the organisation. Over three hours between the end of qualifying and the race, but a very sparse village area. The main activity (the Esports gaming area) closed for no apparent reason 90 minutes before the race start. Why is there no support race? Surely a single-make, tin-top electric car series could fill the time?

There are numerous factory teams, but there’s absolutely zero leverage of their brands. I’ve seen Mercedes lead the championship and have a double podium, maybe I should look at what their electric road cars are like, but there’s nothing. How expensive can it be to park up your latest electric road car in the hall and have a few reps telling you all about it? Same for Porsche, Jaguar, DS, etc…

We just left the whole arena, took the Docklands Light Rail somewhere else for lunch, and came back for the start of the race. Why put these races in cities and try to encourage a new audience if the things around the main show are so average, with zero marketing effort for the dollars spent by the manufacturers on their race cars?
Martin @F1Hornet