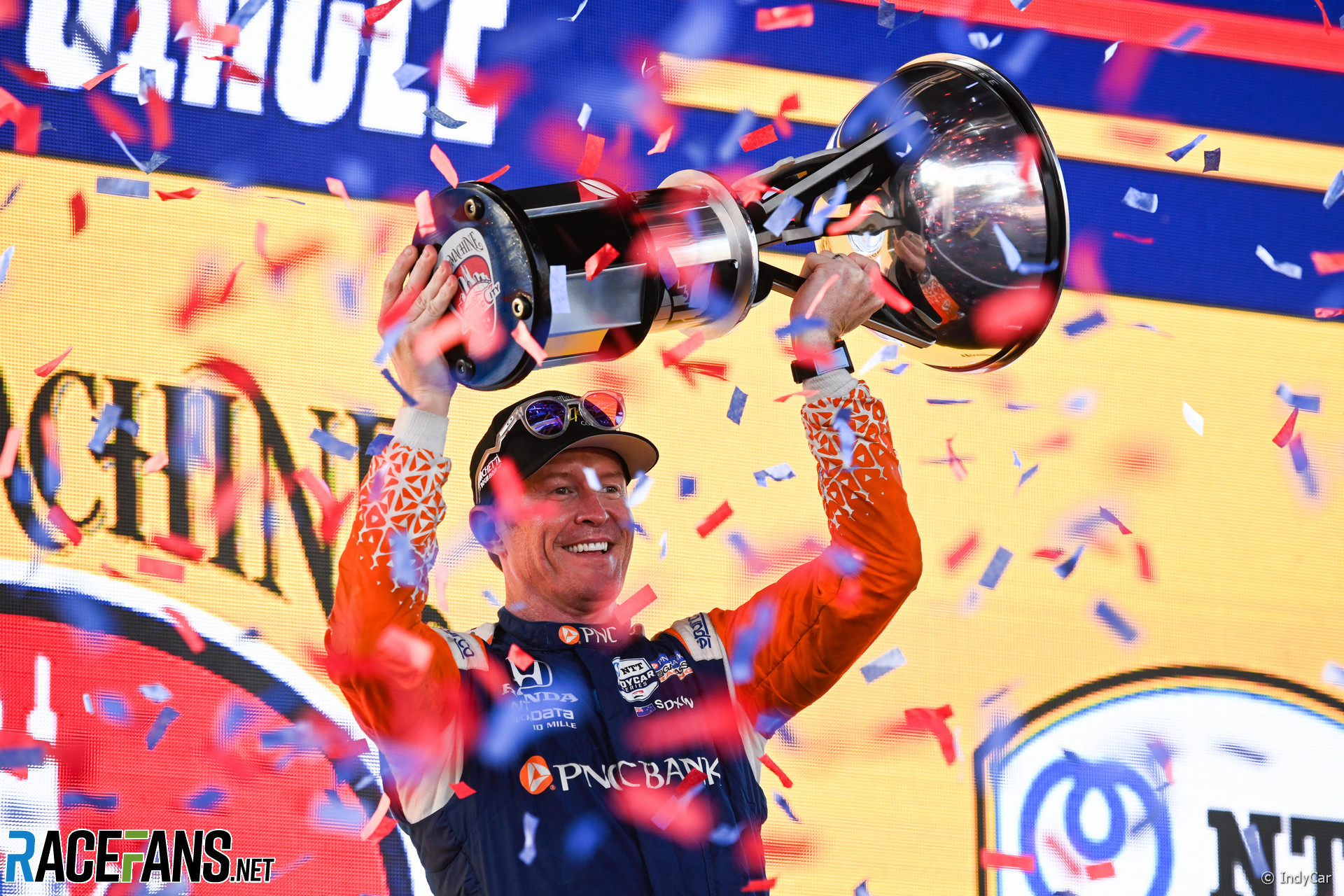 The story of the second Music City Grand Prix in Nashville was a bit like the first: Littered with incidents, disrupted by full course cautions and a late red flag, and an unlikely winner that was caught up in an accident not of their own making, that should never have been in position to win by the end.

But after starting 14th, getting hit from behind in a track-blocking multi-car incident, suffering diffuser and suspension damage, and pitting six times including emergency service for repairs – despite all of that, Scott Dixon somehow found himself in victory lane at the end of it all, holding on by just over a tenth of a second from his Kiwi compatriot Scott McLaughlin in second.

On lap 26, Dixon was hit from behind by Dalton Kellett and Simona de Silvestro, while he and Callum Ilott were checking up as Graham Rahal ran into the back of title contender Pato O’Ward. O’Ward suffered terminal gearbox damage, and Rahal also suffered heavy damage to the front end. Their wounded cars stacked up the field behind them in turn seven, including Dixon, who had nowhere to go.

O’Ward retired and finished 24th, suffering a critical blow to his championship chances.

Dixon’s golden ticket to the front of the field came just after making a fuel-only pit stop on lap 50. Another incident for Rahal and Rinus VeeKay brought out the caution one lap later, vaulting Dixon from 15th place, to the net lead of the race. The six-time IndyCar champion drove over half the race on a single set of the harder, primary compound tyres, but had enough pace in hand to withstand McLaughlin’s challenge despite a sketchy exit out of the final corner towards the chequered flag.

The win is of significance in two ways. For the history books, Dixon surpasses Mario Andretti for sole possession of second place on the all-time wins list with 53 career victories. For the pursuit of the 2022 IndyCar Series championship, Dixon now sits just six points behind Will Power for the lead in the championship. Power faded from podium contention due to a gear selection issue and finished 11th, while Marcus Ericsson lost drive with less than ten laps to go and retired from the race, credited with a 14th place result. Ericsson is now 12 points behind Power, third in the table.

Pole-winner McLaughlin led the first 22 laps, and were it not for a slow final pit stop under yellow, may have had the track position he needed to overhaul Dixon at the end of the race on newer tyres.

Ironically, a timely pit stop before a yellow flag put defending IndyCar champion Alex Palou up front. He made his first stop on lap 21, then Hélio Castroneves spun out at turn three to bring out a caution. Palou would go on to lead 31 laps, and still remains within reach of a second IndyCar title despite all of the controversy created by his attempts to defect from Ganassi to McLaren after 2022.

Alexander Rossi and Colton Herta were both a lap down after early incidents in the race. Rossi stopped at turn ten to bring out the race’s first of eight cautions, and Herta was nudged into the tyre barriers and suffered wing damage.

But the same multi-car incident that involved Dixon helped them get back on the lead lap, and they confidently drove through the pack to salvage top-five finishes – Rossi in fourth, and Herta in fifth.

Josef Newgarden went off-sequence and led twelve laps after the incident between Rahal and VeeKay, eventually finishing sixth. Newgarden’s restart attempt with five laps to go saw the Nashville, Tennessee native try and pass three cars in one corner, but in doing so, he pushed Romain Grosjean into the wall at turn nine. This brought out the eighth caution and a red flag.

Felix Rosenqvist finished seventh, while Christian Lundgaard, who was pressuring Dixon for the lead before the penultimate caution, sunk down the order on the last restart, and finished eighth, with Simon Pagenaud and Jack Harvey rounding off the top ten. It’s Harvey’s first top ten finish of 2022, and it comes despite having to yield position to Pagenaud for avoidable contact on the last lap.

This race had eight full-course cautions, one fewer than last year’s inaugural Music City GP. After the incidents involving Rossi, Castroneves, and then the lap 26 pileup – Devlin DeFrancesco and Takuma Sato crashed at turn ten to bring out the fourth caution, leaving the veteran Sato unhappy with the rookie DeFrancesco.

After the Rahal/VeeKay incident, rookies David Malukas and Kyle Kirkwood crashed out while battling inside the top ten. Both drivers were okay after the hard hit into the turn nine barriers, causing the sixth caution. And with eight laps remaining, Jimmie Johnson spun coming off the transition from the Korean War Veterans’ Memorial Bridge into turn four, broadsiding the barriers with the right side of his car, to cause the seventh caution.

With 36 out of 80 laps were run under yellow, IndyCar’s trip to Nashville was a gruelling slog of a race, and that’s not even considering the 90-minute weather delay caused by thunder and lightning storms in the area. But it was far from uneventful, and could be a turning point in the championship with three races left.

The series returns to action on 20 August for the St. Louis 500 at Gateway Motorsports Park.