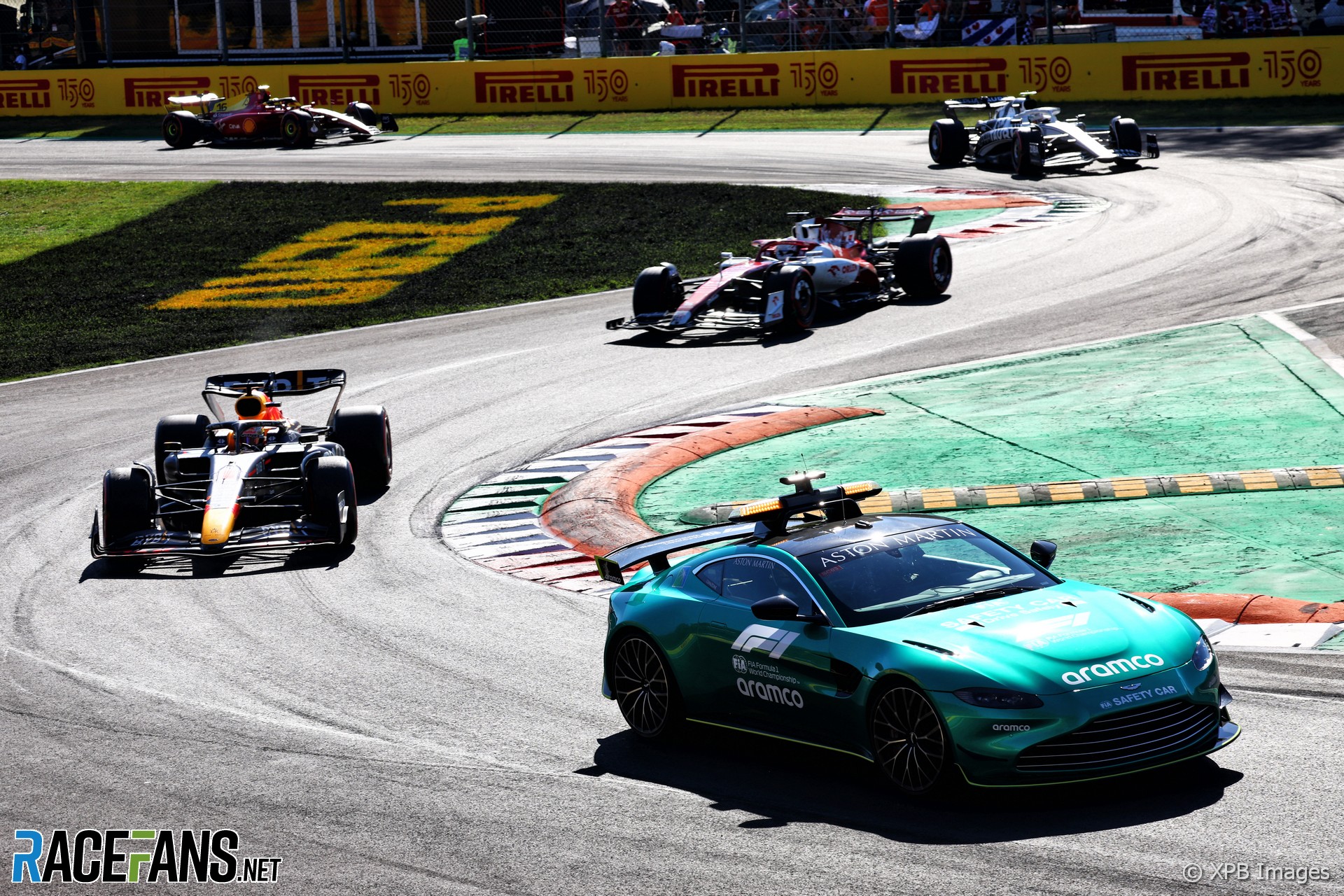 The Italian Grand Prix was won by Max Verstappen as the final six laps of the race were completed under Safety Car conditions.

The race was neutralised after Daniel Ricciardo pulled off to the inside of the track between the two Lesmo corners on lap 47, prompting local yellow flags. When it became clear his McLaren could not be wheeled away, and a vehicle was needed to move it off the track, the Safety Car was deployed by FIA race director Niels Wittich on lap 48.

On lap 51 – with less than three laps remaining – Ricciardo’s McLaren was still in the process of being cleared by a crane driven out onto the circuit. After passing the recovery vehicle, the race director allowed lapped cars to overtake the Safety Car, which moved Verstappen to the front of the queue. However, there remained two lapped cars – Valtteri Bottas and Yuki Tsunoda – between the leader and the Charles Leclerc in second place.

As the leaders passed through the Lesmos behind the Safety Car on lap 52 – the penultimate lap – Ricciardo’s car had now been cleared off the track. The pack of ten cars between Russell in third to Mick Schumacher in 12th were around half a lap from catching the back of the queue. However, at that time, teams were informed that the race would not restart for the final racing lap.

The Safety Car completed the 53rd and final lap before pulling into the pit lane as per procedure, with Verstappen crossing the finish line under Safety Car conditions to take the chequered flag.

The decision to end the race behind the Safety Car was criticised by multiple teams. Despite his driver winning the race, Red Bull team principal Christian Horner told Sky that there had been “more than enough time” to have resumed the race before the final lap. Leclerc also protested the decision in the cockpit of his Ferrari, labelling the call as “a joke”.

But was the decision to end the race under Safety Car conditions the correct one?

In the FIA’s sporting regulations for Formula 1, there is no article which demands that races must finish under green flag racing conditions. Races are permitted to finish behind the Safety Car, with a procedure that outlines what should happen if the Safety Car is out on track on the final lap of the race.

There are many examples of precedent for this. Multiple races have finished behind the Safety Car in recent years, including the Chinese Grand Prix in 2015 and the Bahrain Grands Prix in both 2019 and 2020.

As a grand prix is a distance-dependent race that runs to a set distance, if the final 20 kilometres of a race happen to take place under Safety Car conditions, that is no different to the same happening earlier on. Safety Cars can occur on any and every lap of a race and treating the final laps of the race any differently the the ones proceeding it risks the integrity of a race.

Given that all racing positions are frozen under Safety Car conditions, having the final six laps completed with no racing allowed effectively means the race distance has been reduced by that same amount.

In order for the race distance to be respected, there is an argument that all efforts should be made to ensure that races can and should finish under green flag conditions when reasonably possible. This is certainly the case for many racing series around the world, particularly in North America, including IndyCar and NASCAR, that make regular efforts to ensure races finish ‘under green’.

There is also the recent history of races being red flagged in order to provide more time for racing finishes. Most recently, the 2021 Azerbaijan Grand Prix was suspended under a red flag with to allow Verstappen’s crashed car to be recovered with four laps remaining. Once it was cleared, the race resumed with two racing laps.

Whether you believe the Italian Grand Prix or any grand prix should never be allowed to finish under a Safety Car comes down to how strongly you feel that Safety Cars are an acceptable means for a race to end. As fans, surely we want to see green flag finishes wherever possible, even if they are only for one lap?

Many would argue that stopping races in order to guarantee a racing finish is artificial and puts ‘the show’ before the organic competition. However, as fans of Formula 1 and fans of racing, why would any motorsport fan not want to see a race finish under racing conditions if possible? A simple case of throwing a red flag to pause the competition, allow incidents to be cleared safely with no unnecessary rush for workers, then resume with at least one final racing lap to determine the result does not feel all that unreasonable – especially when even the race winning driver admitted it was a shame that the race did not resume, despite him not having to defend his lead for a tense final lap.

While there are naturally examples where the Safety Car must be deployed but it’s just too late for a red flag to be called – such as the 2012 Brazilian Grand Prix – there was more than enough time for the race director to suspend proceedings with a red flag. The problem in this situation appears to have been the Safety Car picking up the driver in third, rather than the leader, but not addressing the mistake for multiple laps, effectively wasting time that would otherwise have allowed the race to resume.

It would be hard for anyone to deny that Verstappen was a deserving winner of the race having shown superior race pace throughout the 53 laps, but it is also a shame that drivers and fans alike were robbed of a chance to see the Italian Grand Prix won at racing speeds like it should have been.

Was it the correct decision to end the Italian Grand Prix behind the Safety Car? And if not, how should it have been handled?

Cast your vote below and have your say in the comments.

Do you agree it was correct to end the Italian Grand Prix behind the Safety Car?

55 comments on “Should the Italian Grand Prix have finished behind the Safety Car?”