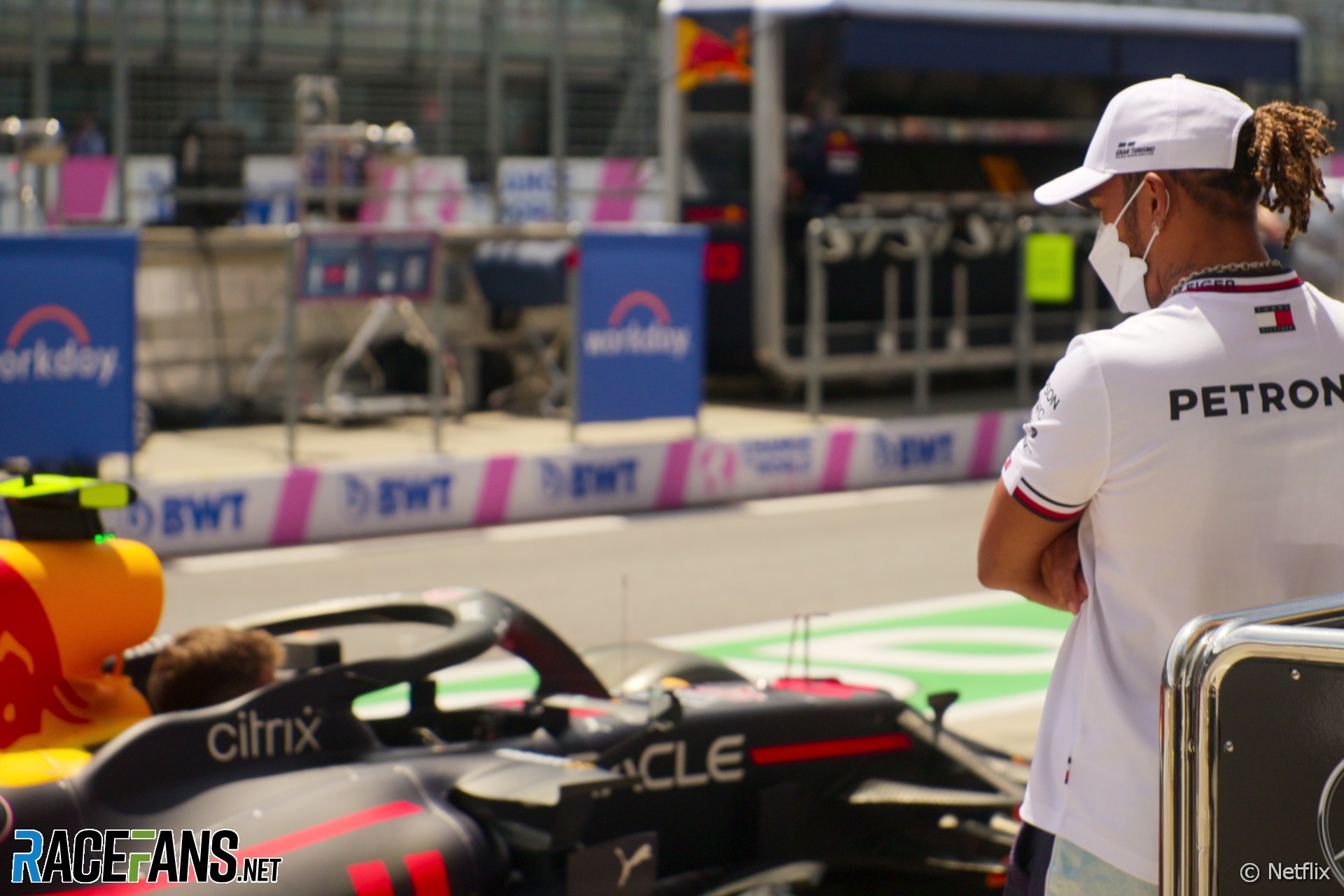 Formula 1 expects its popular Netflix series Drive to Survive to continue beyond its current deal to cover the 2022 and 2023 seasons, and is welcoming the competition of similar series from other motorsport championships.

Drive to Survive has delivered an unparalleled behind-the-scenes look at the whole F1 paddock, a privilege previously only available to media, since the 2018 season. It has become a streaming phenomenon and vehicle for bringing new fans to F1.

Ian Holmes, F1’s director of media rights and content creation, spoke at the recent BlackBook Motorsport forum in London about Drive to Survive’s creation, its strategy and also its future beyond its current contract for two more series: a fifth, which is filming the current championship, and a sixth that will follow the 2023 F1 season and appear the year after.

“I think if we’re happy with it, if people want to consume it and watch it, and Netflix is happy with it, then I think we will continue [beyond series six],” Holmes said.

“What we saw, certainly in the last series, maybe the last two series, the team principals seem to take a more central role. But effectively we’re dealing with 30 people. And this is where I think we have an advantage over perhaps some football leagues [with shows]. Pretty much every sport is looking at their own sub-version, shall we say.

“But we have an advantage. We have 30 people, and that’s it. So you can actually go in quite deep with them, and cover the whole grid. So I think our sport lends itself to that.

Holmes said McLaren’s Grand Prix Driver series on Netflix’s streaming rival Amazon Prime instigated the idea to create Drive to Survive at a time when watching F1 almost exclusively meant watching races live on television. The championship’s new owner Liberty Media thought there could be more success in a production of its own design rather than delivering “an arm’s-length licence”, as previous F1 owner Bernie Ecclestone preferred, that administered capped filming and footage rights to shows focusing on individual drivers or teams.

“Off the back of Liberty wanting to take a slightly different approach to things, and an approach that was more inclusive, we thought wouldn’t it be better to actually adopt a narrative that focuses on the sport as a whole?” said Holmes. “All of the teams, all of the drivers, all the team principals, et cetera.”

Amazon already had a highly successful series, All or Nothing, which covered a range of different sports including NFL, soccer, rugby union and NHL ice hockey. F1 pitched a similar product to Netflix and opened negotiations with the company.

“We actually did a deal with Netflix pretty quickly,” said Holmes. “But the deal was subject to delivering the teams. So then we had to sit down with 10 teams, which took quite a lot longer, to put it mildly.”

Famously, Ferrari and Mercedes refused to participate with the series at first. “But again, it was new for all of us,” Holmes continues. “And essentially what we’re asking of the teams, and it’s important again that they recognise this, okay it took Ferrari and Mercedes a little bit longer, but they embraced the concept.

It required not only a huge turnaround in the teams’ attitudes to being filmed in what is usually a highly secretive environment, but also in F1’s approach to footage access after years of cracking down on distribution of any video from F1 race weekends that wasn’t from its licensed international TV broadcasters.

“I’ve read certain stories about people in F1 having to write to Lewis Hamilton or whoever it was to tell them to remove footage from their social media accounts, and probably I sent a few of those myself,” Holmes recalled. After Liberty Media took over F1, Hamilton showed them a collection of ‘cease and desist’ letters he received from Ecclestone over his social media use.

“The way it [the show] works is contractually the teams have certain very, very defined areas where they are allowed to request amendments and changes. Areas such as anything that accidentally reveals anything either commercially or sportingly sensitive – at the time of release, of course.”

But with each series of the show going online a couple of months after each F1 season ends, the teams’ bargaining power against the narrative interest of the programme is limited.

“[The teams] get to see the rushes, but they don’t get to see it in the form of the final cut. And essentially it is so no one is going to throw anyone under the bus.

“There’s been a few things here and there that have caused some controversy. But it’s a very collaborative approach. There have been requests coming from teams that perhaps don’t strictly meet the criteria in which they are allowed to make them, but if we don’t think it will detract or dilute the narrative, and I know that Netflix themselves and the production company are also quite helpful, [then it can be cut]. Because it is a two-way thing.”

The editorialisation of the show, given it is a docu-drama series rather than a straight retelling of each F1 season race-by-race, has come under scrutiny. But Holmes denies Drive to Survive’s filming presence influenced the highly controversial conclusion to last year’s world championship at the Abu Dhabi Grand Prix.

“I think the answer is no,” he bluntly replied when whether the Netflix cameras might have stirred up a more dramatic conclusion. “Certainly it doesn’t influence the outcome of a race or a session or the championship.”

F1’s live viewing figures rose for that race as free-to-air deals were struck for the title decider between Hamilton and Max Verstappen, who entered the final weekend level on points. Drive to Survive’s success was also a contributing factor to an increased live audience.

“We realised the full extent of the potential for success [with Drive to Survive] was in series three,” Holmes said. “Series one was very well-received, Netflix was happy. They famously don’t share a great deal of data in terms of viewing, but conversationally we had a good idea of how it was doing.

“Second series [of shows] never normally rate as high as the first series, there’s usually a small drop-off. And that was the case with us, we had a 5% drop-off, which is totally normal. And then series three, there was a 50% increase. And that’s when we sort of sat back and thought ‘that’s not normal’.”

He drew a comparison with Netflix’s acclaimed series The Last Dance on basketball star Michael Jordan and the Chicago Bulls NBA team. “The contributing factors, over and beyond just the narrative that was in series three, is that the genre’s grown. The Last Dance, many people have seen that, and people watch The Last Dance who perhaps don’t watch basketball. The same can be said for Drive to Survive.

“And that comes back into the viewing numbers. It’s not just how many people watch, it’s actually who’s watching. That’s where the value is. Because what we saw was that people were engaging with F1, who don’t necessarily sit down on Sunday afternoon and watch Sky, Canal+ or ESPN. Many of them now subsequently do as we’ve seen in our viewing figures. But essentially the real value is reaching out to a broader demographic.

“There’s a myriad of different ways of looking at it, and essentially it does translate to viewing figures. There are people who perhaps got into the sport watching Drive to Survive. Or indeed following a driver on social media, who then have translated through and will now watch the live coverage on Sunday afternoon or Saturday, whatever it might be. When we’ve looked at it internally, obviously that is the direction of travel that we want to see, but it’s not the absolute requirement.”

Anticipation for the next series of Drive to Survive is already growing, and there’s still a long way to go before the F1 season is complete. Mercedes and Red Bull’s team principals have continued to take shots at each other following their bitter 2021 rivalry, Ferrari’s title challenge has been compromised by unreliability and strategy errors, the silly season has been its most dramatic in years. As well as the F1 debut of the Miami Grand Prix there is also the return of four grands prix that provide some of the season’s most visually appealing footage.

But while F1’s current popularity may be driven in part by Drive to Survive, it is only because the championship is putting on such a strong on-track show that Netflix is continuing to have such brilliant narratives to play with.