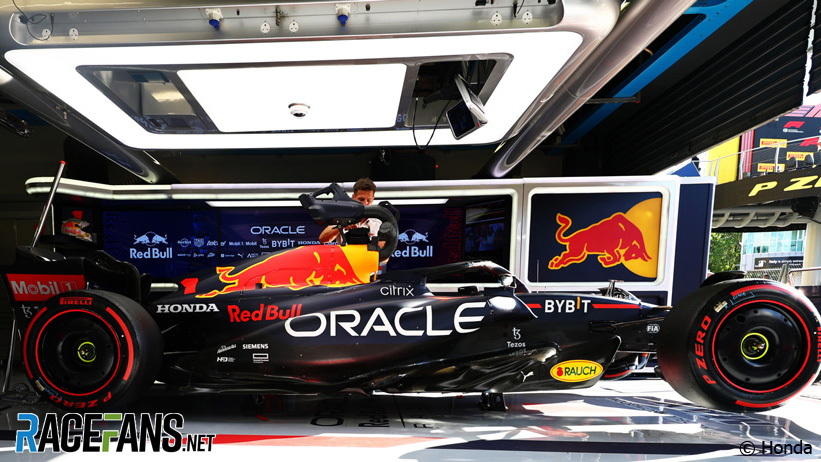 Honda’s logos will return to Red Bull and AlphaTauri’s cars for the rest of 2022, beginning with this weekend’s Japanese Grand Prix at Suzuka.

The automotive brand announced its departure from Formula 1 two years ago last Sunday. Its deal to supply engines to Red Bull’s two teams ended when the 2021 season concluded.

Honda then entered an agreement in which the new Red Bull Powertrains division operated its power units this season before Red Bull took engine design, build and operation fully in-house.

However, two months ago Honda Racing Corporation extended its engine support deal to cover a further two seasons before the current V6 hybrid turbo power unit regulations are replaced in 2026. Throughout this period, these engines are officially badged as Red Bull units. But ahead of Honda’s home race, at a circuit it owns, an updated agreement has been put into action.

While both teams cars have carried HRC logos since the season began, the Honda logo will return to Red Bull and AlphaTauri’s cars for the first time since the 2021 Abu Dhabi Grand Prix this weekend. The teams issued images of how the updated branding will appear.

As part of the enhanced agreement between the team and manufacturer, Red Bull driver Sergio Perez will join the likes of Indianapolis 500 winner Takuma Sato and Super Formula star Toshiki Oyu as a lecturer at the Suzuka-based Honda Racing School in a new ambassadorial role. He and his Red Bull F1 stablemates will attend the annual HRC Thanks Day on November 27, one week after the end of a season which is likely to see the team and Max Verstappen claim the championship trophies.

“Honda has invested significantly in hybrid technology over the course of our partnership. This has ensured the supply of competitive power units to both teams, for which we are very grateful,” said Red Bull team principal Christian Horner.

“Our combined goal is to continue to deliver dominant engines and achieve the most success possible in the following three years. To mark this, we look forward to welcoming the Honda logo back on to the car from Suzuka onwards.”

Red Bull motorsport consultant Helmut Marko said the team is “going from strength to strength with the technical support from HRC until the next generation of engines are introduced in 2026.”

“We are confident this relationship with HRC will set us up for more success in the future and thank them for their ongoing support,” he added.

Last month Red Bull confirmed it had ceased discussions with Porsche over a potential tie-up with the manufacturer when F1’s new power unit rules are introduced in four years’ time. Horner previously indicated the team is open to working more closely with Honda providing it “fits with the long-term strategy of the team”, which intends to build its own power units in-house at its Milton Keynes base.