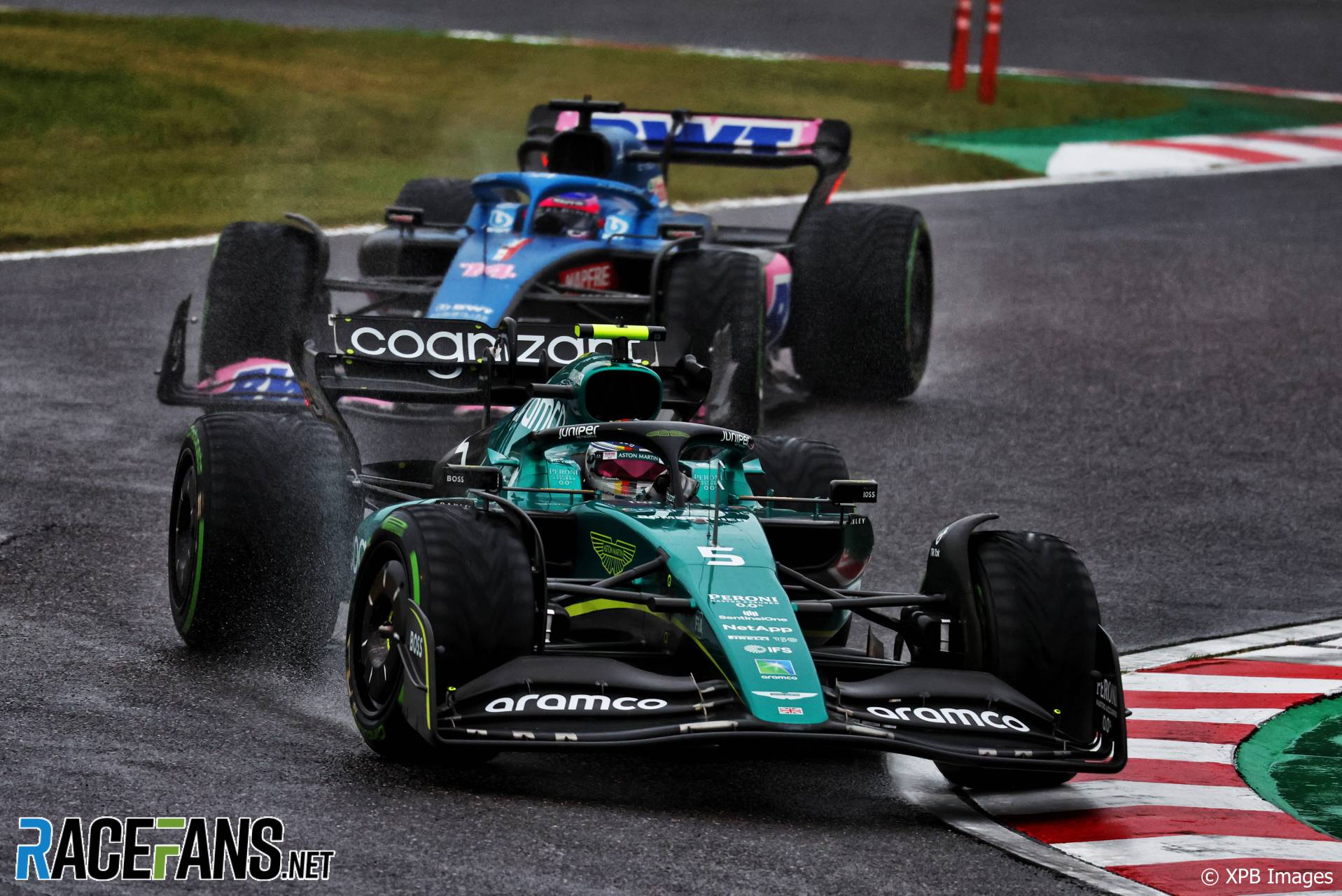 Fans at the Japanese Grand Prix witnessed what may by the last scrap between two drivers who fought over championships in the previous decade – Sebastian Vettel and Fernando Alonso.

Alonso applied huge pressure to his fellow multiple champion for lap after lap, before gambling on a late pit stop to chase after his rival. The pair began the final lap nose to tail – but due to confusion over the race distance their teams weren’t even sure the last lap had started.

The pair tangled at the race’s original start. Vettel made a flying getaway from ninth on the grid but skidded off as he tried to pass his rival on the outside of the first corner.

The Aston Martin driver managed to get away without hitting anything, but had fallen to 16th place. Following the two-hour stoppage, he was quick to seize on a strategic gamble to get back the places he’d lost.

Before the cars were sent out to resume the race, drivers were briefed on the situation. In Vettel’s case, the team expected that as there was only three-quarters of an hour left, it would be impossible for the race to run long enough for full points to be awarded.

Vettel’s race engineer Chris Cronin therefore advised him that he needed to reach at least ninth place to score points. That indicates they expected no more than 50% of the race distance to be completed. In the end the race reached 52% race distance, yet the FIA unexpectedly awarded full points.

Under the rules all drivers had to use full wet weather tyres while circulating behind the Safety Car. Vettel had been advised he needed only to follow the Safety Car into the pits before the restart if he thought the conditions were good enough to switch to intermediates.

Vettel indicated he wanted a slightly reduction in his front wing angle, then headed for the pits as the race restarted. Alonso, 10 places ahead in the queue, asked if he should stay out and was told to:

Vettel pitted at the same time as Nicholas Latifi and jumped ahead of him when they came in. As soon as the other teams saw the lap times the pair were able to do on intermediate tyres they began bringing their drivers in.

However Alonso was two places behind team mate Esteban Ocon, and following him into the pits would mean losing time as they changed to intermediate tyres.

Mercedes faced the same dilemma and brought both their drivers in on the same lap, George Russell losing time while Lewis Hamilton was being serviced. Alpine chose to bring Ocon in and leave Alonso out:

Alpine brought Alonso in the next time around. Meanwhile Aston Martin urged Vettel to keep up his pace to ensure he took maximum advantage from others’ delays.

On the lap he came into the pits, Alonso cut across the chicane. In the Miami Grand Prix he was penalised for cutting a chicane and gaining an advantage. On this occasion Alonso told his team he backed off at the pit lane exit to ensure he did not benefit from going off.

He did gain a position over the delayed Russell, as did several other drivers, but wasn’t able to keep Vettel behind.

Once the pair passed drivers who stuck to their full wets as long as they dared – perhaps waiting for more rain or another Safety Car period – Vettel had picked up 10 places with his gamble on pitting immediately for intermediates.

With over half an hour of racing still to go on, the drivers had to manage their tyres carefully to ensure the intermediate tyres would go the distance on the punishing Suzuka track.

It soon became clear to Alonso that passing Vettel on the track would be very difficult. As early as lap 15 he was urging his team to consider making a second pit stop so he could attack his rival with the benefit of fresher rubber.

Alpine were keeping an eye on how quickly Alonso was pulling away from Latifi, Russell and Lando Norris behind. They appeared especially concerned not to drop him behind McLaren driver Norris, as the team is Alpine’s major rival for fourth in the constructors championship.

Alonso continued to press Alpine. But he still didn’t have enough of a gap over Norris for the team’s liking.

Meanwhile a fault had developed on Vettel’s radio which would make it difficult for the team to tell him when the race was over. He had to rely on his pit board to know how many laps were left.

Alpine finally brought Alonso in seven laps after his first suggestion. He felt the call had come too late.

Alonso immediately passed Latifi and was initially catching Vettel by around five seconds per lap. But his tyres couldn’t sustain that pace and he also had Russell to clear.

Alonso passed Russell as the last lap began, though Aston Martin did not initially realise it was the final tour.

The confusion over whether it was in fact the final lap of the race caused further complications for Aston Martin as Vettel’s radio wasn’t working. Eventually he and Alonso were both persuaded the race was over.

The two drivers were in strikingly different moods as the race ended. Vettel, though infuriated by his radio problem, was delighted to have bounced back from his lap one error and equalled the team’s best result of the year.

But Alonso felt Alpine should have listened to him sooner, and said it wasn’t the first time the team had compromised his strategy.

18 comments on ““What a mistake. What are you doing?” Inside Alonso and Vettel’s Suzuka battle”