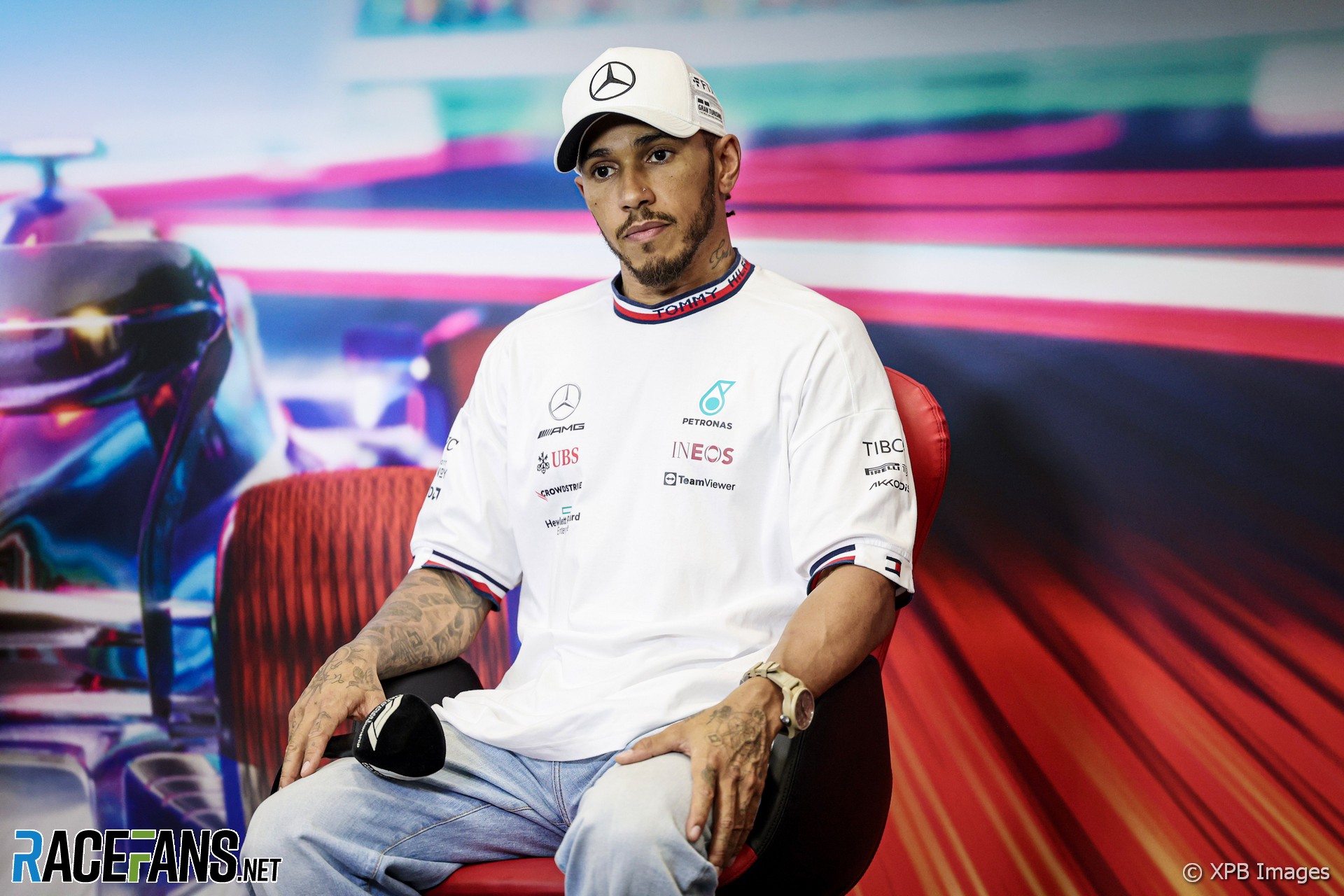 In the round-up: Lewis Hamilton offered his support to NASCAR driver Bubba Wallace who will return from a one-race ban in the series’ finale at Phoenix today.

Wallace will “do amazing when he comes back” – Hamilton

Wallace became the first driver to be banned for a race by NASCAR since 2015 following an on-track collision and subsequent altercation with Kyle Larson at Las Vegas Motor Speedway two weeks ago.

The banning of Wallace, the first black driver to win a NASCAR Cup series race, prompted questions over whether other drivers would have been treated as harshly. Hamilton, who has declared his support for Wallace previously, said he “probably doesn’t need any advice” from him.

“I think what he’s done and what he stands for is amazing and he’s been so brave and being outspoken. I saw his documentary, I’m just generally really proud of him.

“I think the best thing you can do is not let anything pull you down, just keep on pushing, keep your head up. Do not give up. Do not listen to the things that are being said and do not read what’s on social media and just keep believing.”

“If you let those things get to you, it can hold you back. And so I just ask him to [hold his] head high and don’t give up,” Hamilton concluded. “I think he’s going to do amazing when he comes back.

Aston Martin team principal Mike Krack says he believes the team can now move forwards, following the conclusion of an FIA investigation into its 2021 cost cap reporting that led to a $450,000 (£387,000) fine.

Despite the punishment, Krack said Aston Martin was satisfied with the process. “My first reaction is that we are happy we can close this chapter,” he said. “The 2021 cost cap discussions are are hopefully terminated soon.

“The collaboration with the FIA was very good, very open and transparent and the regulations are very complex and there was different interpretations and obviously that’s what it led to.”

Unlike Red Bull, Aston Martin was not found to have over-spent, a point Krack was keen to emphasise.

Aston Martin’s fine, unlike Red Bull’s, was for mis-categorising the way that it accounted for its spending, rather than breaching the cost cap. “I think it’s important to highlight that we were always under the cap which is the most important factor and the FIA has determined the fine, we accept this and move on,” said Krack.

Track temperatures only explanation for Williams’ loss of performance

Alexander Albon, who joined his team mate at the bottom of the times in qualifying yesterday, is at a loss to explain why he was so much slower in qualifying compared to final practice.

“Were we nine tenths off in FP3 and obviously we’re not running minimum fuel in FP3 or anything like that,” explained Albon. “The track definitely got hotter, I think that played a massive part in our performance in qualifying.”

He called qualifying a “weird session” saying that “it really went away from us” and it wasn’t clear why. “We did have a different out-lap strategy than most most cars, I honestly think we stuck to our guns, which was the right thing to do. And it was working for us in FP3, I think, as the track came up and fell away from us.

“I’m only hypothesising, track temps and stuff like that, but honestly that’s the only explanation I have at the moment, because we didn’t change the car in between the two sessions.”

Albon’s final lap was compromised by a snap of oversteer which saw him run wide and lose the time for a track limits violation. He believes that was also related to the higher track temperature. “It was the same corner speed as run one and [I had] just no rear at all.”

Alonso hits out at media over his Hamilton comments

“And again… Please, all the titles are amazing, well deserved and inspiring,” said Fernando Alonso in a social media post yesterday. “Incomparable to each other and let’s enjoy champions and legends of our current time.”

What was he referring to? He didn’t specify, but at the time his name was trending on Twitter largely due to quotes attributed to him regarding Lewis Hamilton and Max Verstappen, reported by Dutch newspaper De Telegraaf. “Max’s titles are worth more than Hamilton’s,” it said. “I have a lot of respect for Lewis but it’s different when you win seven world championships having only had to fight against your team mate.”

“Tired of the continuous search for headlines,” Alonso added in his social post. “Let’s enjoy them.” He did not claim the quotes were incorrect or misattributed.

Ricciardo: 'I started to speak to a psychologist last year — the most challenging year I have had. Racing is very much results driven and dictates your Sunday happiness. I was neglecting friendships and thought it would be good to talk to someone to make sure the two sides of my life didn’t cross over.'

Antonelli started from pole and escaped being attacked into the opening corner, which was crucial for him then avoiding the chaos that occurred through the rest of the lap. He finished lap one 3.964 seconds clear, and had a lead of nine seconds on lap nine when the safety car came out and eradicated his advantage.

He was kept honest throughout by his nearest challengers, Chris Harteveld (Netherlands) and Alberto Garcia Gomez of Spain, throughout the 60-minute race, but held his nerve to steer his McLaren 720S to an eventual 2.9-second winning margin. Baldwin was presented with his Gold medal on the podium by 11-time Formula 1 Grand Prix winner Felipe Massa, an achievement that puts his name in the history books as the first British athlete to take the top prize at the FIA Motorsport Games.

The biggest impression Sainz left on Steiner was his incredible work ethic, something he says has also been passed onto his son Carlos Sainz Jr. who currently drives for Ferrari in F1. 'The year with Carlos Sainz was very educational for me. He is a professional. I learned a lot about discipline and how to conduct yourself – how to work hard to achieve something, he never missed a beat.'

From a conversation with one of our engineers while marshalling at the #MexicoGP in 2016, to working for Mercedes-AMG HPP as a Hardware Coordinator 👏

Alejandro shares with us his unique @F1 story and how that conversation changed his life ❤️ pic.twitter.com/4E9VWcL79b

Fans waiting for drivers at the media pen after qualifying… never seen anything like it! #F1 #MexicoGP pic.twitter.com/guEoOwzk29

Got a note from Brad Pitt explaining what happened with our near miss on the Austin grid. Unnecessary, but nice of him. Absolutely nobody is obliged to talk to me on the grid, but as I endeavour to make 10/12 minutes of live and unscripted sports TV I’m obliged to at least ask.

As the debate about whether Red Bull’s punishment for breaching the F1 cost cap fits the infringement, Random Mallard considers whether the financial regulations should be enforced as strictly as the technical rules:

The FIA have clearly gone for an approach closer to the sporting regulations, whereby a breach is penalised based on the severity of the breach, rather than the technical regulations, whereby any breach, no matter how small (e.g. Brazil 2021) is an automatic disqualification. My guess is it is down to personal choice as to how people want to see this policed. Some may want disqualifications for any breach, some may only want it for extreme major breaches. There are valid arguments on both sides.

I’m interested there wasn’t a points deduction, at least for the constructor’s, where any deduction would likely have made no difference to the 2021 results. And there is precedent for losing constructor’s points but not driver’s, notably Spygate and the RP20 brake duct infringement (where 7.5 points were deducted per car, and a 7.5 point deduction for Perez would, as it turned out, have lost him P4 in the driver’s championship at season’s end). I wouldn’t have been overly surprised if the FIA had deducted constructor’s points but not driver’s points.

Overall, my initial reaction is this is slightly too lenient. However, I don’t think I can truly make a decision until the actual impact of the penalty is seen, which could be 2024 before anything noticeable materialises, if anything come of it at all.
Random Mallard