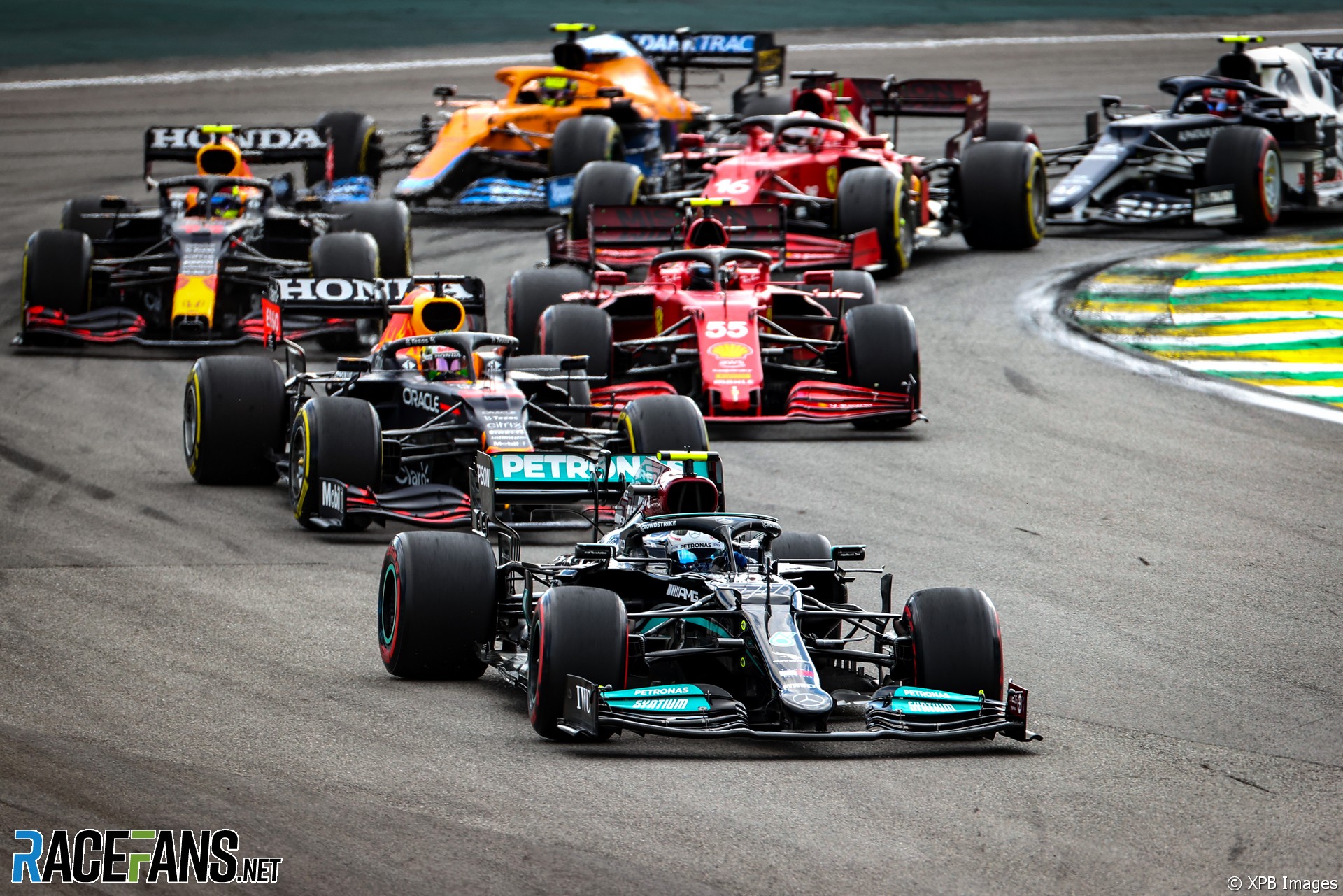 The penultimate round of the 2022 season is also one of the most popular events of the season for fans and drivers alike – the Brazilian Grand Prix at Interlagos.

But with Max Verstappen and Red Bull in seemingly unstoppable form having already secured both world championships, will the last sprint weekend of the season serve up the kind of action the promoters are eager to see?

For the third and final time in 2022, teams and drivers will face a sprint race and the unusual weekend format that comes along with it.

Friday will see just a single hour of practice before the traditional three-stage qualifying system in the evening sets the grid for the 24 lap sprint race on Saturday that will effectively serve as the first 100 kilometres of the grand prix which will resume on Sunday.

Interlagos will be the first circuit to host a sprint race for the second time. It will be an interesting case study, as last year’s sprint race was by far the most memorable of the five held to date – mainly due to Lewis Hamilton making his way forward from last on the grid, to where he had been relegated following his disqualification from qualifying due to a technical infringement. Whether there will be as much excitement this time around should there be a fairly typical grid order remains to be seen.

Drivers have been fairly indifferent towards the idea of another sprint race, although many have expressed their approval of the condensed weekend format. Haas driver Kevin Magnussen, however, is happy to face the third sprint race of his career.

“I think we’ve done well, we’ve scored points at every sprint so far and I actually quite like those weekends where you get into serious business, quickly,” Magnussen explained.

“Three practice sessions are actually a lot, and these weekends show that you can get ready for qualifying with one practice. It’s the same for everyone, you deal with it, and it becomes normal. From a driving perspective, it’s very cool.”

Last year’s Brazilian Grand Prix was the scene of one of the most controversial incidents of the season – unsurprisingly involving championship rivals Verstappen and Hamilton.

While battling for the lead late in the race, Hamilton used DRS to slipstream past the Red Bull Verstappen approaching turn four. In defence, Verstappen appeared to miss the apex and push Hamilton off the track and onto the run off, before doing the same himself and retaining his position.

Controversially, the stewards deemed that no further investigation was necessary, despite Verstappen appearing to have clearly held his position despite running outside of track limits. Eventually, Hamilton successfully passed Verstappen into the same corner a handful of laps later to win the race, but the incident only added to the tension that built up towards the end of last year’s championship, and prompted a stunned reaction from drivers who questioned why similar incidents had been handled differently earlier in the year.

This season, it’s very difficult to imagine that any similar incident at turn four would be judged the same way. New guidelines on the rules of racing issued to the drivers at the start of the year suggest that drivers will not be given such leeway to retain positions if they push rivals knowingly off the circuit. Furthermore, Pierre Gasly’s penalty in Mexico for passing Lance Stroll by going all four wheels out of the white lines should suggest that anyone who does the same in turn four – or who keeps a position by going all four wheels off the track – should expect a punishment from the stewards.

Gasly on the brink of a ban

Gasly’s aforementioned penalty from Mexico was also highly consequential for the AlphaTauri driver as it put him on 10 superlicence penalty points – leaving him just two away from triggering an immediate one-race ban.

No F1 driver has ever reached the 12 point threshold since the system was introduced for the start of the 2014 season. It has happened in F2, however, including three times this year.

But Gasly’s predicament is that he will not have any of his points removed until next May – seven rounds into the 2023 season. Most concerningly, Gasly has picked up penalty points in each of the last three rounds – a sequence he needs to ensure he breaks this weekend in Brazil.

Any collision or major infringement Gasly is deemed guilty of this weekend runs the risk of him missing out on his final race with AlphaTauri in Abu Dhabi – which would be a sad end to his tenure with the team with which he’s started nearly 100 grands prix for. However, that would not be unwelcom by Alpine, as it would mean Gasly will enjoy a fresh start when he joins the team next season, rather the heading to his new team with the risk of a ban hanging over him.

Before Gasly joins them at the end of the year to replace Fernando Alonso when he departs for Aston Martin, Alpine’s main focus remains beating McLaren to fourth place in the constructors’ championship. Ahead of Interlagos, they remain seven points ahead of McLaren after dropping four points to their rivals in Mexico.

Alonso’s engine failure likely prevented Alpine from further extending their lead over McLaren, but it also has a potential knock-on effect for the final two rounds that he may require yet another power unit to complete these last two weekends. However, should that be the case or not, Alpine will be buoyed by McLaren’s Lando Norris’ expectations that Interlagos will not be a strong race for them.

Having been out-scored by McLaren in four of the last five rounds, a double points finish in Brazil could put Alpine too far out of reach for McLaren to catch up heading into the final race in Abu Dhabi. However, their cause will be helped significantly if they manage to avoid any more mechanical problems this weekend – something team principal Otmar Szafnauer is all-too aware of.

“We know reliability is going to be the key in our championship battle and it’s something that has let us down after showing such a strong level of performance in recent races,” Szafnauer said. “I’m confident we can rectify these issues going into the final two races of the season.”

For a country with such a rich Formula 1 history as Brazil, it’s remarkable to think that there is no driver on the current grid who hails from the South American nation.

Felipe Massa was the last full-time Brazilian driver in Formula 1, retiring at the end of the 2017 championship following a stint with Williams at the end of his career. It’s been five years since the passionate Sao Paulo fans have had one of their own to cheer and it looks like they will have to wait longer still.

Miami-born Brazilian Pietro Fittipaldi did step into Roman Grosjean’s Haas seat at the end of the 2020 season and has tested and driven the team’s 2022 car on many occasions this year. However, while Fittipaldi will be getting a run out in Abu Dhabi, he will not be driving at his home grand prix this weekend due to the sprint weekend format making Friday’s first practice session more crucial than ever.

But while Fittipaldi remains in close proximity to the F1 grid, Formula 2 champion Felipe Drugovich has also moved into the periphery of contention for a race drive. With so many F2 championship getting a chance to race in Formula 1 – even if the likes of Nyck de Vries had to wait longer than expected for a drive – Drugovich’s chances appear to have been boosted by becoming the very first driver of the Aston Martin driver development programme.

Whether or not that makes Drugovich any more likely to one race in Formula 1 remains to be seen, but the vibrant Brazilian fans deserve to have one of the own to cheer at their home grand prix. Although, perhaps with Hamilton being awarded honorary citizenship of the nation, they might just have one after all.

Are you going to the Brazilian Grand Prix?

If you’re heading to Brazil for this weekend’s race, we want to hear from you:

Who do you think will be the team to beat in the Brazilian Grand Prix? Have your say below.

12 comments on “A sprint race to remember at last? Five talking points for the 2022 Brazilian GP”