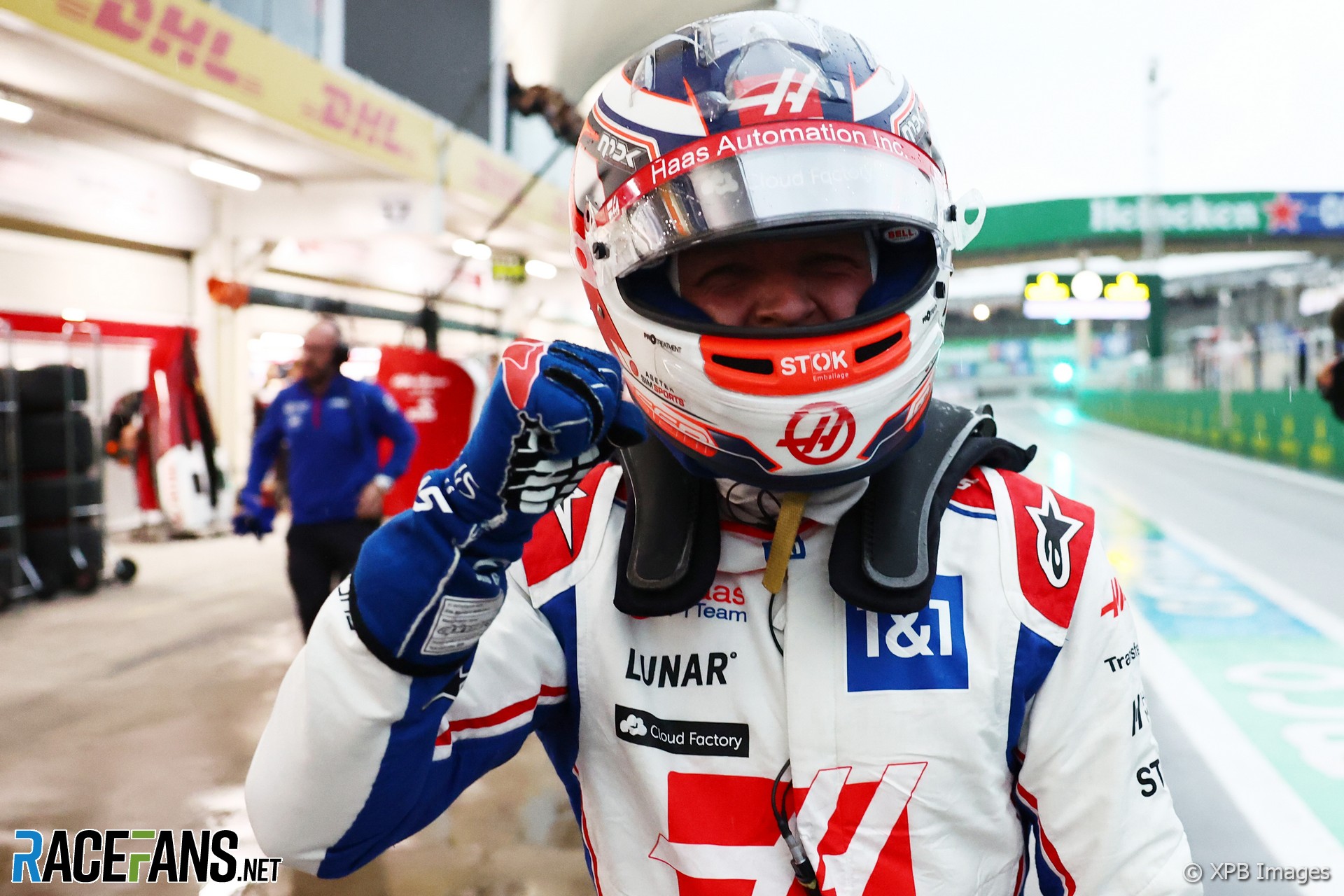 Kevin Magnussen secured a stunning pole position for the Interlagos sprint race after a fortunately-timed red flag ensured he beat Max Verstappen to the fastest time.

In a qualifying hour affected by intermittent rain, Magnussen was the first driver onto the track in Q3 and set what would be the pole position time before George Russell spun into the gravel and trigged a red flag stoppage. Rain fell during the suspension, meaning none of the drivers could improve after the session resumed, securing a shock pole for Magnussen and Haas.

Max Verstappen will start alongside Magnussen on the front row for tomorrow’s sprint race, with George Russell lining up third.

With light rain having fallen over the Interlagos circuit between first practice and qualifying, the track was still lightly damp as the first phase of qualifying began. All drivers chose to venture out on intermediate tyres, Ferrari warning Charles Leclerc that more rain would arrive 10 minutes into the session.

Leclerc was the fastest of the first batch of drivers to complete an initial banker lap, setting a 1’18.723. Team mate Carlos Sainz Jnr went second quickest, a tenth of a second behind. Then the Red Bulls went fastest on their first efforts of the session, Max Verstappen going quickest of all and team mate Sergio Perez behind in second.

Times continued to fall by the minute, with Fernando Alonso moving to the top of the table before Lewis Hamilton went event faster to take the top spot. With just under 10 minutes remaining, AlphaTauri pitted both Pierre Gasly and Yuki Tsunoda for soft tyres. Gasly’s first lap was slower than his previous best, but the next time around he went quickest of all.

By now, almost the entire field had moved onto the soft tyres. With three minutes remaining, the drop zone consisted of the two Aston Martins of Lance Stroll and Sebastian Vettel, Valtteri Bottas, Daniel Ricciardo and Kevin Magnussen.

Stroll and Vettel both improved on softs, bumping the two Ferraris into the drop zone. Sainz jumped into safety on his first slick lap, but Leclerc had to abandon his first lap when he was caught behind Tsunoda, leaving him only one lap with which to get himself through to Q2. Fortunately for Ferrari, he did just that, but his rivals were improving with every car that crossed the line.

After the end of a flurry of late times, Nicholas Latifi was the first driver to be knocked out in 16th place, a tenth behind Daniel Ricciardo in 15th. The two Alfa Romeos were also out, with Zhou Guanyu in 17th and team mate Bottas eliminated in 18th after a late session call for a second set of intermediates backfired. Tsunoda was eliminated in 19th, with Mick Schumacher the final driver out in 20th.

The Haas driver, whose future at the team is in serious doubt, was dismayed to learn he had failed to make the cut. “We didn’t get through, it was 15.1 to get through,” he race engineer informed him. Not only was Schumacher’s 1’16.361 well outside that, it was almost two-and-a-half seconds slower than his team mate.

There was still no rain actively falling over the circuit when the pit lane exit opened to commence the second part of qualifying. All drivers quickly headed out on track, but while all 15 were on soft slick tyres, there was a mixture of cars on used or new tyres.

Verstappen set the initial benchmark with a 1’11.670 on used tyres, but was beaten by Lando Norris who went a tenth of a second quicker than the Red Bull with brand new tyres. Pierre Gasly moved into third-fastest, just five-thousandths of a second slower than Verstappen, before Fernando Alonso jumped to the very top with his second push lap on new softs.

George Russell and Esteban Ocon both reported spots of rain appearing on their visors, before Leclerc also found rain streaks appearing on his visor through the middle sector. With the two Mercedes out of safety, the team pulled both Russell and Hamilton in for fresh softs. Russell used his to move up to third, while Hamilton improved on his first lap on fresh tyres to move directly behind his team mate.

With five minutes remaining, Carlos Sainz Jnr was on the bubble in tenth place, while Ocon, Alexander Albon, Vettel, Ricciardo and Stroll had to find some time to ensure progression into Q3. Vettel found just over a tenth to jump to ninth, which knocked Sainz into danger. The Ferrari driver responded by blitzing his own personal best time to jump up to second place and go safe once again.

In the final minute, the reported drizzle appeared to begin having an impact on the track with no one able to improve. The two Aston Martin drivers both made identical mistakes into the Senna S at the start of the lap, which sealed their fates, while none of the other drivers who need to find time were able to do so.

At the end of the session, that left Albon out in 11th place, ahead of Gasly and Vettel in 13th. Ricciardo failed to follow McLaren team mate Norris through to Q3 and was knocked out in 14th, while Stroll’s mistake at turn one left him as the final driver to see his qualifying end in Q2 down in 15th.

The Autodromo Jose Carlos Pace was now so dark with rain clouds hanging overhead that the rain lights on the back of the cars formed a dazzling spectacle as the field queued at the end of the pit lane. With rain possibly falling at any moment, Ferrari chose to split strategy by sending Leclerc into the queue on intermediate tyres – the only one of the ten drivers to do so.

Magnussen was the first driver in the queue to leave the pits on slicks, with Leclerc behind him. At the end of his out-lap, it became clear the rain was not falling. Ferrari tried to call Leclerc in at the end of the lap, but they were too late and he was forced to complete a second lap. Meanwhile, drivers on slicks began to set their first lap times, with Verstappen going fastest on a 1’11.877. He was then beaten by Magnussen, who went two tenths of a second quicker than the world champion to take provisional pole.

Russell went third fastest, but then lost control of his Mercedes when he touched the grass under braking for turn four. He ran off into the gravel trap and tried to spin his Mercedes to avoid the barrier, but beached his car in the process. The session was red-flagged with Magnussen on the top of the times.

As the marshals cleared Russell’s car, the rain began to fall in earnest. Suddenly, Magnussen had a genuine chance of taking pole position if his rivals were unable to improve. When the session eventually resumed, it was clearly too damp for slick tyres. With only seven minutes remaining, there was no realistic opportunity for any of the ten drivers to improve on their initial times. Perez and Hamilton would both venture out on intermediates for sighting laps, but returned to the pits without starting a flying lap.

When the session clock finally ran out, Magnussen was officially confirmed as the being on pole position for the Saturday sprint race – the first of his career and the first ever for the Haas team. Verstappen will start alongside him on the front row in second place, with Russell’s mistake having the unintended consequence of securing him third on the grid.

Lando Norris took fourth on the grid, with Sainz in fifth ahead of the two Alpines of Ocon and Alonso in sixth and seventh. Hamilton will start eighth for the sprint, with Perez and Leclerc rounding out the top ten, the Ferrari driver having failed to set a time.