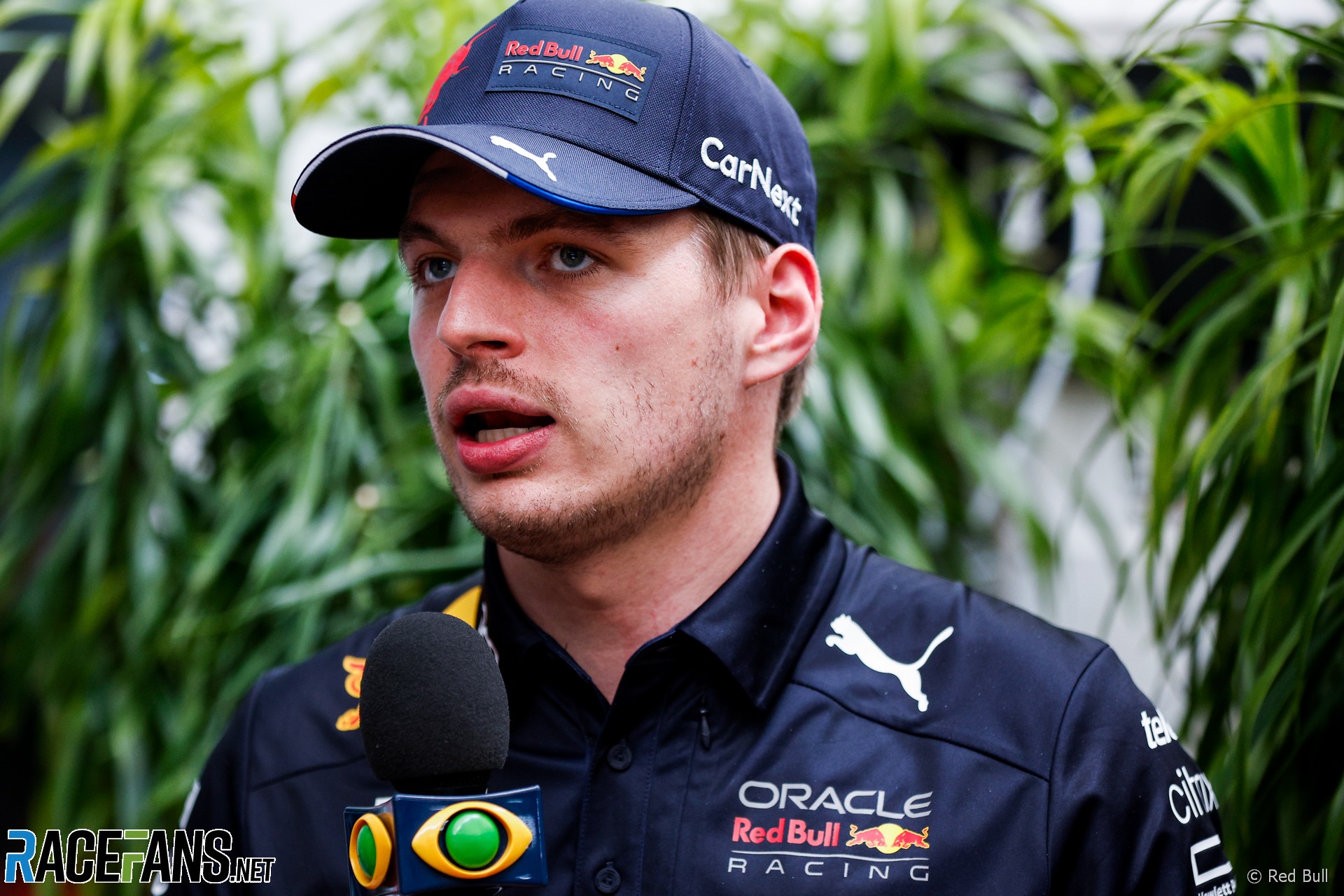 In the round-up: World champion Max Verstappen says that Red Bull will use its restricted aerodynamic testing time for next season as “extra motivation”.

The penalty Red Bull received for exceeding the budget cap in 2021 will give the team “extra motivation” to keep winning next year, says Max Verstappen.

Red Bull will lose 10% of their allocated wind tunnel and CFD testing time under the regulations in 2023 – in addition to their $7 million fine – after they agreed to a punishment offered by the FIA over their breach of the Financial Regulations. Verstappen says Red Bull, who have won this year’s constructors’ championship, will not be deterred by the disadvantage.

“It will affect us, but how much, I don’t know yet,” Verstappen said. “But I am confident that the team and the people we have, they can use that as extra motivation to try and do even better.

“I know, of course, they always give their best. We have a very competitive car, we have a lot of great ideas, I think, already for next year as well with the car. And hopefully it’s going to be enough.”

Missing second practice only a concern if it rains – Albon

Alexander Albon says missing second practice to allow future team mate Logan Sargeant to drive his car in his place will only be a concern if it rains.

Albon will drive in the first practice session and qualify on Friday, before handing his car over to Sargeant for the second and final practice session on Saturday morning. Despite missing out on an hour of track time, Albon says he would rather miss second practice than the opening session.

“For sure it will have a small effect,” Albon said. “It’s better to lose FP2 here than FP1, just the way that qualifying is obviously on the Friday. I think, generally speaking, it should be fine.

“The main concern is obviously if it’s wet on Saturday and it’s dry on Friday – then there might be a bit of learning to do in the sprint race. But that’ll be some fun.”

Pierre Gasly says that he and Alpine are working to allow for him to drive the team’s car in the post-season test in Abu Dhabi after next weekend’s grand prix.

A two-day test will be held at the Yas Marina circuit on the Tuesday and Wednesday after the test. Only so-called ‘young drivers’ will be allowed to driver for one of the two days, while teams are permitted to run a race driver on the other day to help collect more data on next year’s Pirelli tyre compounds.

Gasly will be departing the AlphaTauri team to move to Alpine following the race. Asked if it is intended that he will drive the A522 in the test, Gasly said “we’re discussing about it and if that’s possible, that will be the case, yes.”

"I love this sport. I love racing. I would have definitely said at the end of last year that I lost a bit of the love for it, because as you know, it was difficult. But I just refuse to let that moment be a deciding factor in my life and my career. And I still feel fit and focused and there’s no stopping. You know? We want to get number eight."

"Maybe he needs to forget F1 and focus on the other motorsport series."

"The clip shows the two iconic red Ferrari cars battling for first place on the track, with Italian commentary laid over the top."

"Abu Dhabi will be especially busy from next week because of the Formula 1, and the World Cup which is taking place in Qatar, as many teams will be hosted in the city. During Formula 1 Grand Prix, there are of course many hotels in the city that are very busy. At Dusit Thani Abu Dhabi, we are fully booked. We are hosting some of the football teams for their camp during World Cup."

Why Hypercars will be as big as F1: Richard Mille on the formula of dreams (Motor Sport)

"My biggest objective was to bring younger generations to the track. Endurance was getting a bit old, the spectators were more in their forties and fifties. With Hypercar we have the tools to bring in the young generations, because on video games and in their minds these cars are their dream. Hypercar is closer to street cars than F1, so we have all the ingredients to bring the public to the track."

"The Index highlights Nissan's positive influence on sports through a variety of initiatives, including its participation in the all-electric Formula E racing series and projects designed to help people with disabilities participate in sporting activities, such as the Nissan Possibilities Project in the United Kingdom."

F1's Ella Clarke: 'The main goal for our team is to elevate the fan experience at each circuit' (Females in Motorsport)

"We interviewed Lewis and Lando in front of a huge crowd. I remember Laura Winter interviewing Lando on stage and it was such a surreal moment. I was thinking at the time ‘Woah I can’t believe I’m doing this’. I get that feeling every time I go to a race, as I did in Singapore when I had a moment where I looked around and thought ‘I can't believe I am here and I get to do this for my job’."

How IndyCar is addressing the aeroscreen's pooling problem (Racer)

"We talked with Dallara about whether windscreen wipers could work, which they said was impossible for a number of reasons. One of them is the shape, but it’s not only the shape; we’re short of electricity and we’re very short of space. We also invited Honda and Chevy into solving this problem with us and Dallara ended up doing most of the work."

After @LewisHamilton borrowed their Brasilian flag last year, it was only right that we returned the favour this time round. 🙏 pic.twitter.com/9n6SgvVPEM

How do you even fit in a F1 car, you’re so tall

That said, penalty points have been rescinded in the past. In 2020 @LewisHamilton reached 10, the same as @PierreGASLY is on now, before two were withdrawn:https://t.co/zzaW9F89dl#F1 #BrazilianGP

Due to appendicitis, @svandoorne will not participate in the @FIAWEC rookie test day at Bahrain, November 13th. Team PEUGEOT TotalEnergies wishes him a speedy recovery.

The new organisation of the line up will be revealed in the next days. pic.twitter.com/FixOwWeUn0

This weekend @scuderiaferrari will carry a tribute to Mauro Forghieri. The team's star designer of the seventies and eighties, nicknamed 'Furia', passed away last week. #F1 #BrazilianGP pic.twitter.com/DMAsUOtJqN

With F1 considering revising its controversial sprint race format when it expands to six rounds in 2023, @f1frog isn’t convinced that divorcing sprint races from setting the grand prix grid will be an improvement…

Probably an unpopular opinion but I actually think this will be worse. I am very much an advocate for the scrapping of the sprint races, but there are two things I do like about them. Firstly, I like it when there is a variation of tyre choice and those on softs start well but fade later in the race compared to those on mediums, which is just about the only appeal of a short F1 race in general. But the other thing I quite like is knowing that if there were to be some kind of incident between the lead drivers, they would be starting on the back row together for the actual Grand Prix which would be thrilling. And although the drivers are generally more cautious in a sprint race because of the risk of crashing, I don’t think this would change a huge amount if it was a standalone event, because I don’t think there are too many opportunities anyway for this to make a huge difference.

Also, more points would have to be awarded if it was a standalone event, which would very much devalue the Grand Prix just as the feature races in Formula 2 are devalued by the sprint races. And I would be fearful that making them a standalone event would be an opportunity to use reversed grids, which would certainly compromise Formula 1’s position as the ‘pinnacle of motorsport.’

Effectively, the whole idea is just a disaster, and the only way it could possibly work was if it was part of a sprint championship that was completely separate from the main championship, with a reward of prize money only, and maybe including rookies and gimmicks.
F1 frog