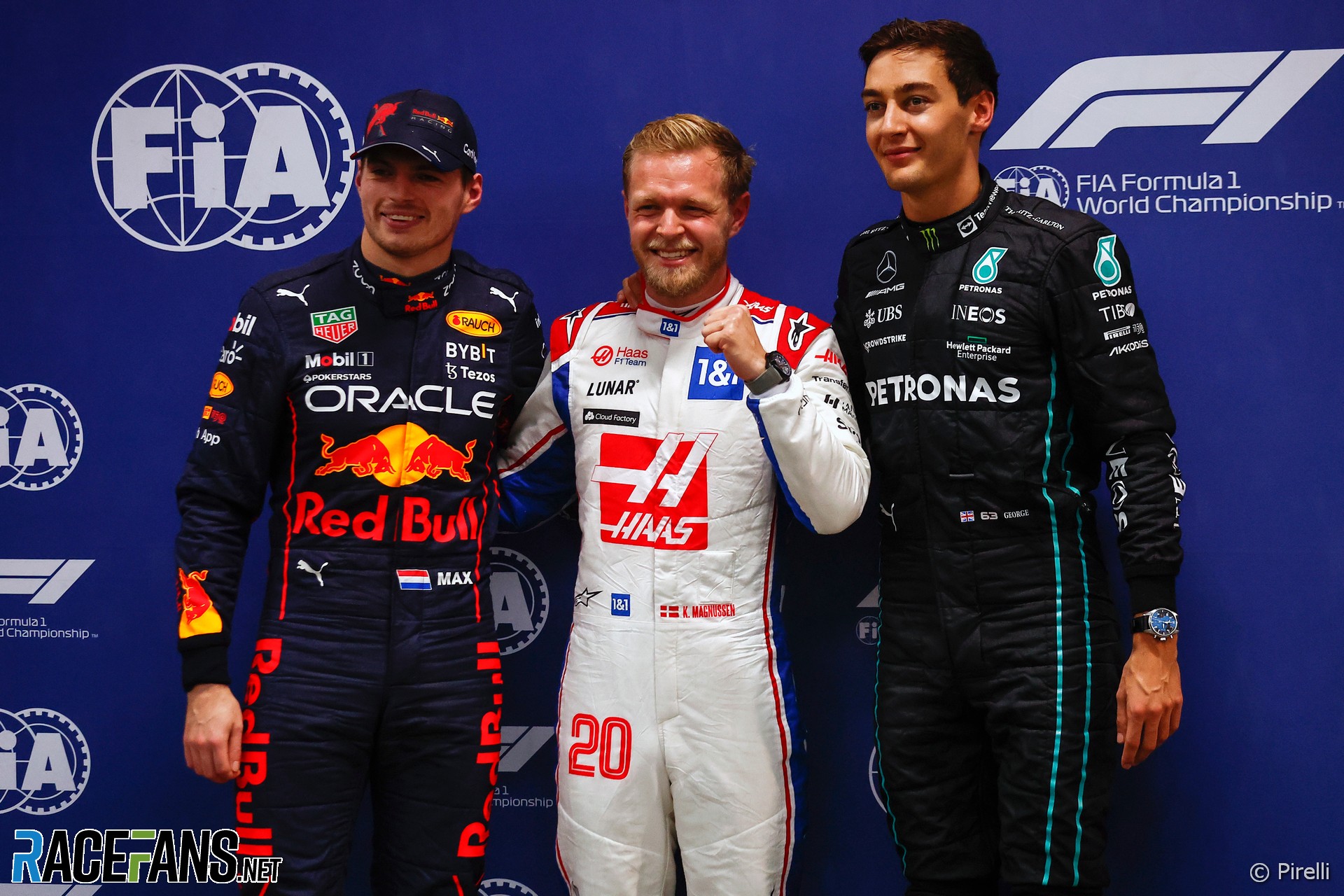 If the Haas team were ever going to secure a pole position in 2022, only the most exceptional circumstances would have allowed for it to happen.

Putting the late season dominance of Red Bull and Max Verstappen aside, Haas’ performance level throughout the year suggests that the team would need a perfect storm of unlikely outcomes to combine in order for them to have any genuine chance to go quickest in a qualifying session.

But in Friday’s qualifying session for the Saturday sprint race at Interlagos, it seemed the racing gods had divinely intervened on their behalf just under four minutes into Q3, when a serendipitous spin by George Russell halted the session. It seemingly occured at the perfect moment as rain continued to fall, soaking the circuit and denying anyone an opportunity to beat Kevin Magnussen’s provisional pole time.

Did that mistake by Russell secure Magnussen’s shock pole position? There is plenty of evidence to suggest the red flag it triggered off did not gift Magnussen and the Haas F1 team their first ever pole position. The most stunning qualifying result of the season may already have been secured before the Mercedes ever left the track.

Magnussen had progressed through to Q3 with nine other cars by improving on his final flying lap of Q2, with 70 seconds of time remaining in the second session. As he completed the lap to go safe in seventh place, the light rain that had been falling at irregular intervals for the last three hours appeared to return once more. There were few major improvements for those drivers in the drop zone as the clock ticked to zero as grip levels began to slowly fade.

In the five-minute interval between the end of Q2 and the start of Q3, the rain continued to fall. It remained gentle enough that slicks would still be the best option for the start of the final phase. Haas took full advantage of their garage being situated at the very end of the pit lane, sending Magnussen out to be the first car to queue at pit exit, 80 seconds before the green light shone.

“So the first lap could be it,” Magnussen’s engineer Mark Slade warned his driver as he sat awaiting the start of the session. “But if you think it’s clearly too wet for the dry tyres, we’ll box and fit inters.”

Directly behind Magnussen was Charles Leclerc – the only driver out of the 10 in the queue sitting on intermediates. When the green light flashed up to his right, Magnussen wasted no time in sprinting around his out-lap to get to the timing line as soon as possible.

Ferrari had not yet realised Leclerc was on the wrong tyres and he tip-toed his way out of the winding pit exit. By the time Carlos Sainz Jnr passed his team mate into Descida do Lago, Magnussen was already turning into Ferradura, 600 metres further up the road.

Magnussen began his lap with his tyres suitably warmed up due to his rapid out-lap. When the crossed the line one minute and 11 seconds later he, naturally, was on provisional pole position. But behind him, Sainz failed to match the Haas’ time and was six tenths slower.

Verstappen was the next to complete his opening lap. The Red Bull driver had been four tenths quicker than Magnussen through the first seven turns, but locked up under braking for the eighth and ran wide, which lost him his advantage. Verstappen completed his lap two tenths slower than Magnussen, putting him into second after his first run.

At this crucial moment, the rain was now having a serious impact on grip. Magnussen sensed the grip levels falling and immediately declared that the session was effectively finished already.

“It’s too wet, now,” he said over radio as he meandered through the middle sector. “Qualy’s over now.”

Sainz, who had enjoyed the second-best track conditions of the 10 drivers on circuit behind Magnussen, continued to push after his first flying lap, but quickly reported he was losing grip.

Behind him, Verstappen was told to complete a recharge lap and prepare for a second push lap. But he too was growing concerned about the conditions.

“You can keep up the pace,” Lambiase suggested in response.

Lando Norris, Esteban Ocon, Fernando Alonso and Lewis Hamilton all reported that the rain was getting noticeably worse as they carried out their third laps of Q3. The only drivers that were improving on their third laps were Sergio Perez, who had been held up by Leclerc on his intermediate tyres on his first push lap, and the two Mercedes of George Russell and Lewis Hamilton.

Perez had set the fastest first sector but, tellingly, was not improving in the middle sector compared to his first timed lap where he had been stuck behind an off-the-pace Leclerc. Hamilton had improved over the first three corners of his second lap, but had to back off when he suddenly saw the marshal posts flashing yellow as he approached Descida do Lago – his team mate, Russell, having beached the sister Mercedes in the gravel.

With eight minutes and 10 seconds remaining in the final session, qualifying was red-flagged. The rain that had already started to fall continued and naturally washed away the grip that the drivers had enjoyed through Q2 until the start of Q3.

By the time the session restarted, the track was thoroughly soaked. There was no chance for any of the ten drivers to improve in the eight minutes remaining. Magnussen and Haas simply had to wait out the time left until their maiden pole position would be made official.

“It was the longest minutes of my life,” the pole winner said. “I mean, it looked like it was going to be wet so it was it was safe. But you just never know and you don’t want to jinx it.”

It may be easy to assume that Magnussen’s stunning result was down to the luck of a well-timed red flag preventing the likes of Verstappen or Leclerc from inevitably beating him with a second flying lap. But all drivers were struggling for grip on their third laps and Perez was failing to improve in the middle sector strongly. That suggests that the track was already past its best and Magnussen was already on course for pole position had those final eight minutes been run entirely uninterrupted.

Having been sent out to secure the best possible track position prior to the start of Q3, Magnussen credited his team for putting him in the right situation to take arguably the team’s best achievement to date.

“The team put me out in the pit lane as the first car and that was the game-changer,” Magnussen said.

“It gave me the best piece of track because it was starting to rain. So I was the first one getting the most dry and we got pole. It’s crazy.”