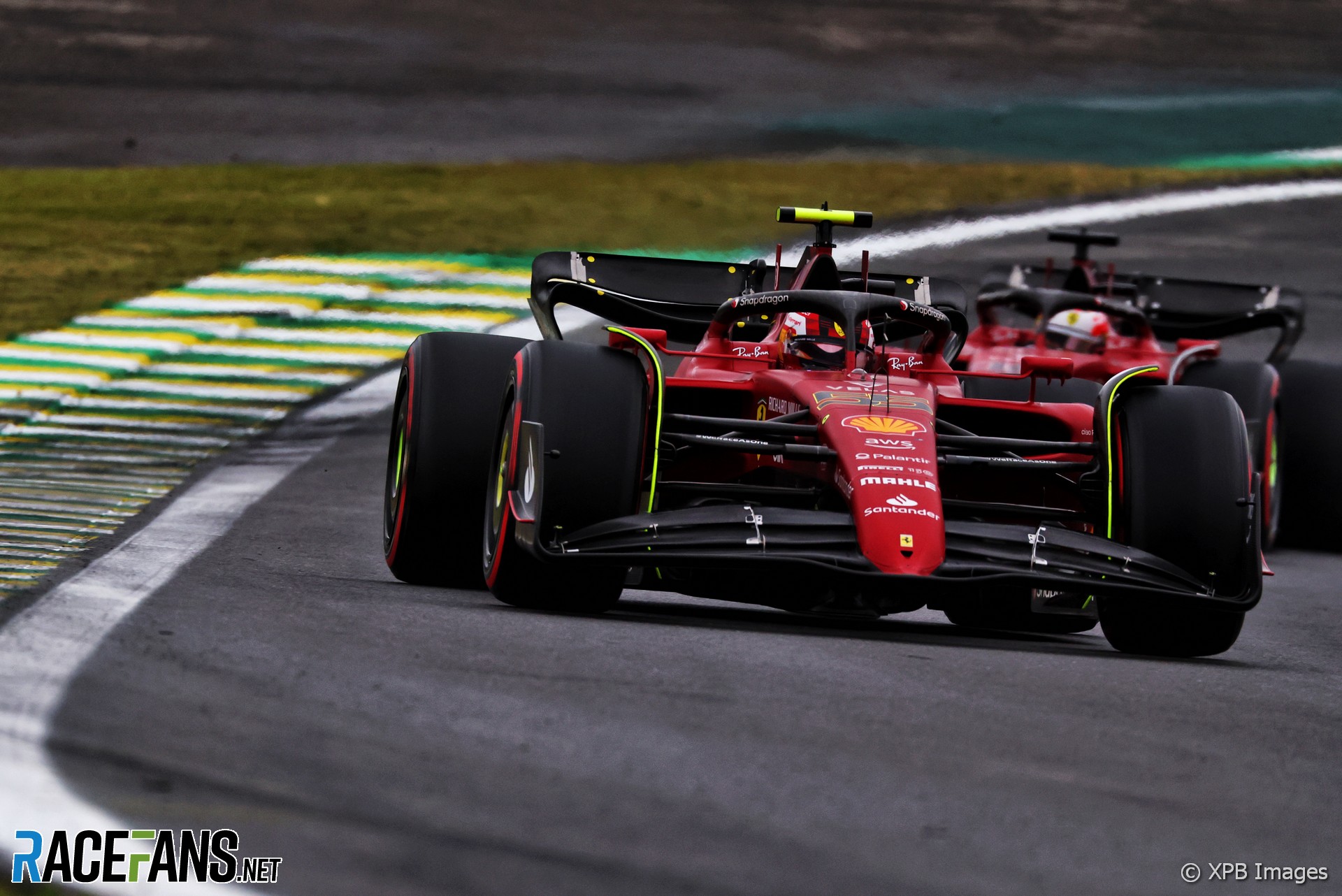 In the round-up: Carlos Sainz Jnr admits he should be higher than fifth on the grid for today’s Interlagos sprint race.

Sainz said qualifying was “absolutely crazy with the weather” which made tyre choices difficult, especially in Q3. Ferrari put him on slick tyres for the final round of qualifying, as eventual pole-winner Kevin Magnussen also used, while Charles Leclerc went out on intermediates in the other Ferrari.

“We tried to be up in the queue first but we lost quite a bit of time behind Charles and we lost a lot of time to Kevin,” said Sainz. “This meant that he had probably a drier track than us at that point.

“I tried to push a lot and probably over-pushed, did a couple of big mistakes, big moments that probably cost me P2 or P3.

“But P1 today for Kevin I think he deserves it, I’m a big fan of him and I’m happy for him.”

Alpine team principal Otmar Szafnauer says it would be unfair if Pierre Gasly is forced to miss a race after he joins the team next year due to penalty points largely accumulated at his current team, AlphaTauri.

Gasly currently has 10 penalty points on his superlicence, leaving him two away from an automatic one-race ban, with no points due to be deducted until next year’s Monaco Grand Prix.

“It’s unfortunate that he got those points with a different team,” Szafnauer told Sky. “If he does happen to cross the threshold of having too many and has to miss a race with us, I’m not sure that’s what the rule was intended to do, to punish a different team. But it is what it is, unless we can get it changed.”

Szafnauer said the rule makers should reflect on whether the penalty points system is “really punishing the driver or the team?” He suggested Gasly may have accrued some of his points for failing to yield positions to other drivers when his team should have advised him to do so.

“I’m sure there are considerations this year to give places back where perhaps the team said ‘don’t’ and you get penalty points and some other things,” said Szafnauer. “I think we have to re-look at it and make sure that it’s equitable.”

Alfa Romeo were disappointed to see both their drivers drop out in Q1 after Valtteri Bottas ran in the top 10 in practice for the Brazilian Grand Prix.

“When you have pace in practice, as we did today, going out with two cars in Q1 is definitely not the result you expect,” said team principal Frederic Vasseur. “Unfortunately, we didn’t make the most of the changing conditions and we ended up paying the price for it.”

Bottas said they got their strategy wrong in Q1. “We made the call to go with intermediate tyres when pitting and that turned out to be the wrong choice. On my in-lap, I saw a Williams struggling and decided to stay on the inters. We realised softs were the best option and pitted again, but two laps were not enough to bring these tyres [up] to temperature.”

"I know how important finishing second is for the team, and everyone back at the factory, in terms of bonuses, especially at a time when energy prices have gone through the roof and living costs in the UK have sky rocketed."

"According to the Bloomberg Billionaires Index, his inheritance of the world’s biggest energy drinks firm and two Formula One racing teams brings Mateschitz’s fortune up to $15.7 billion."

"While it’ll be Vesti’s first experience racing in Abu Dhabi next weekend, his form this season has showed that he can adapt well to new venues and will be set on breaking into the top five in the Championship come the end of the year. For Pourchaire, his eyes will be firmly fixed on the podium after his P4 finish there last year, as the pair aim to give ART more glory in 2022 after the French teams’ Formula 3 Drivers’ Championship title."

As Daniel Ricciardo Departs, He Looks to 2024 (New York Times)

"I believe I’m very resilient, but I’m also not superhuman. Of course, I feel pain and hurt and disappointment. So, yes, it’s been tough."

"I watched with great passion and interest the progress of our four finalists at the Ferrari Driver Academy, school of excellence and inspiration. Alice Buckley, Chloe Chong, Chloe Grant and Aurelia Nobels were up to the challenge and confirmed how talented they are."

"Join us #AtTheBarWith Mike Krack for an insight into the life of our team principal."

Absolutely FANTASTIC !!!!! When its your day, it's your day 💯
So happy for my friend @KevinMagnussen

He lived and breathed motorsport. It was his joy to be immersed in it. As he was every single day.

To everyone who joined him along the way as he lived the dream, thank you.

The best motorsport writers have great knowledge, superb prose and the ability to make their readers feel like insiders. Simon Arron was one of the very best & I’m gutted to not be able to buy the definitive F3000 book from him. Thoughts with his family and many friends

Assetto Corsa Competizione players: We have a brand-new update out for PS5 that addresses a number of issues, including crashes, so please close out of your games completely and update! In-game version is 1.8.4.1. Thanks for your patience and see you out on the track!

PeterG says those congratulating Kevin Magnussen for taking his first pole position have jumped the gun.

He won qualifying and that was a great result for him and the team but pole position will be the driver who starts the grand prix on pole position on Sunday.

I mean, if KMag scored the pole then what do we call the pole position sitter on Sunday?

It’s the details such as this that highlight how absurd this sprint format is because all it has done is create these extra complexities. On a normal weekend nobody would dispute KMag as the pole sitter but on a sprint weekend he really isn’t and the fact the sprint format creates these messes just highlights how bad, awful and unnecessary the silly format is.
PeterG