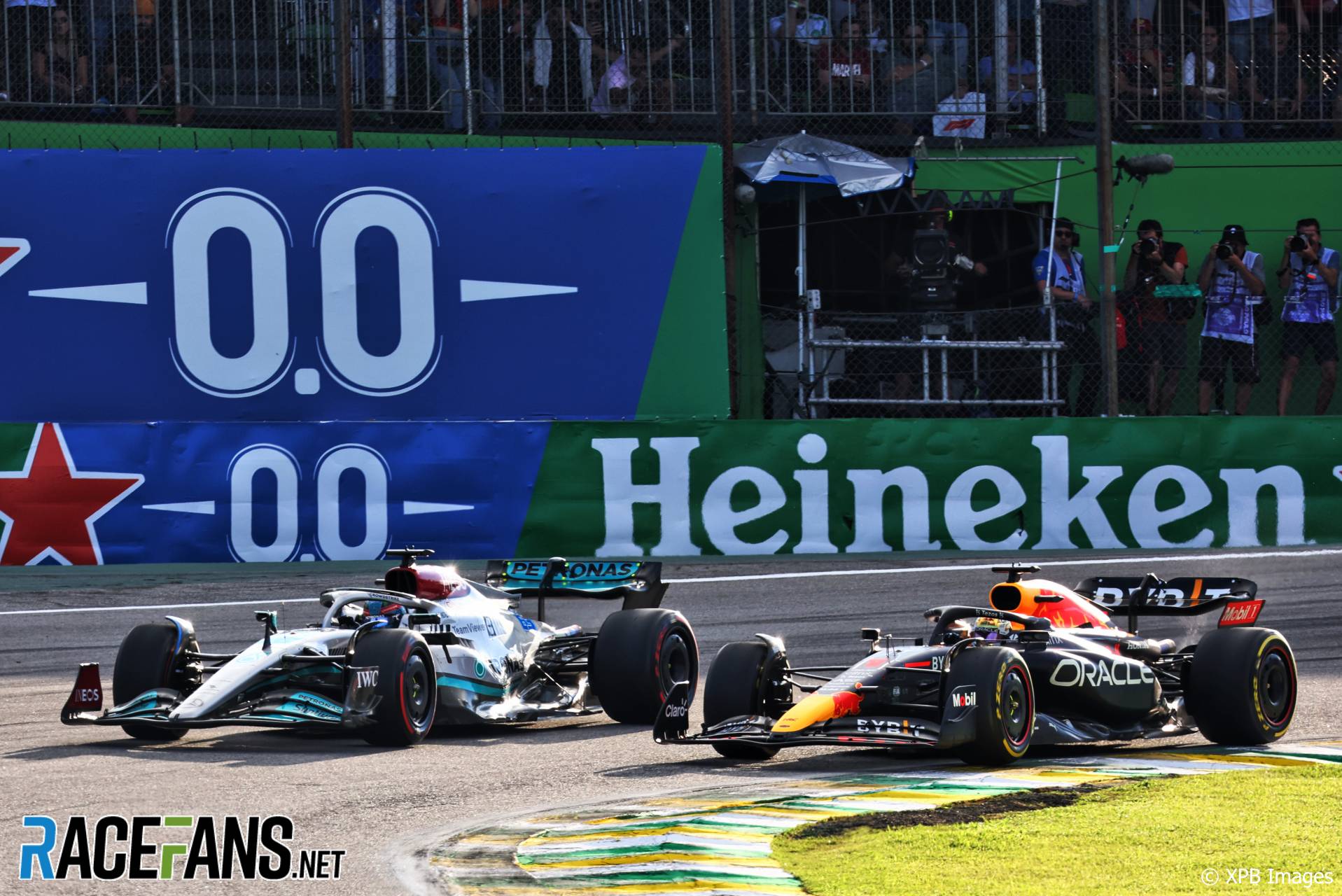 George Russell passed Max Verstappen to win the Brazilian Grand Prix sprint race, while team mate Lewis Hamilton will start alongside him on the front row.

Russell used his soft tyres to catch and pass the world champion to win the 24-lap sprint race, with Carlos Sainz Jnr taking second ahead of Hamilton but will drop five places on the grid after a power unit penalty.

Ahead of the race, Max Verstappen was the only one of the front runners to opt for medium tyres for the 24-lap race, with pole winner Kevin Magnussen and the rest of the top ten all taking soft rubber. When the lights went out, Magnussen got a good getaway to arrive into the Senna S ahead of Verstappen and retain the lead, while Russell maintained third place ahead of Lando Norris in fourth.

Russell fought hard to get by the Red Bull, but Verstappen held firm. At the end of the second lap, Verstappen tucked into Magnussen’s slipstream and passed the Haas to take the lead into the first corner, before Russell used DRS at the end of lap three to relieve Magnussen of second. Sainz passed Norris for fourth place, before taking third from Magnussen soon after.

Fernando Alonso was forced to pit for a new front wing when he clashed with Alpine team mate Esteban Ocon twice in the opening laps. Alonso appeared to clip the rear of Ocon’s car as he slipstreamed his team mate and fell to the very back of the field as he recovered to the pits.

Russell kept in touch of the leader, getting within DRS range of Verstappen by lap 11. The Mercedes kept the Red Bull under heavy pressure, through the Senna S and down on the run to Descida do Lago, but Verstappen held firm. The next lap, Russell was even closer and fought hard to take the lead once again, but Verstappen again repelled the Mercedes through the first sector.

By the end of lap 14, Russell was yet again close enough to attempt a pass on the leader and managed to use DRS to draw alongside Verstappen into Descida do Lago. This time, Russell had enough momentum to clear the Red Bull before the corner and swept through into the lead. Now ahead, Russell pulled away from Verstappen who was complaining of a lack of front end grip.

Sainz caught and passed Verstappen into the first corner, but Verstappen clipped the rear of the Ferrari, damaging the left-hand endplate from his front wing which broke off along the approach to Descida do Lago. With his damaged car, Verstappen fell prey to Hamilton, who passed him into the Senna S to move up to third place.

As Russell maintained a gap of around four seconds to Sainz, Hamilton began slowly catching Sainz ahead as the laps counted down. Russell crossed the line to take the chequered flag and claim the sprint race victory, with Sainz holding onto second place by just under half a second. With Sainz demoted five places for Sunday’s grand prix, Mercedes will enjoy a front row lock-out for the first time this season.

Verstappen finished ahead of team mate Sergio Perez in fourth, with Charles Leclerc taking sixth in the second Ferrari. Lando Norris claimed seventh, which will become sixth after Sainz’s penalty is applied, while Magnussen finished eighth to claim the final sprint race point. Sebastian Vettel and Pierre Gasly rounded out the top 10.