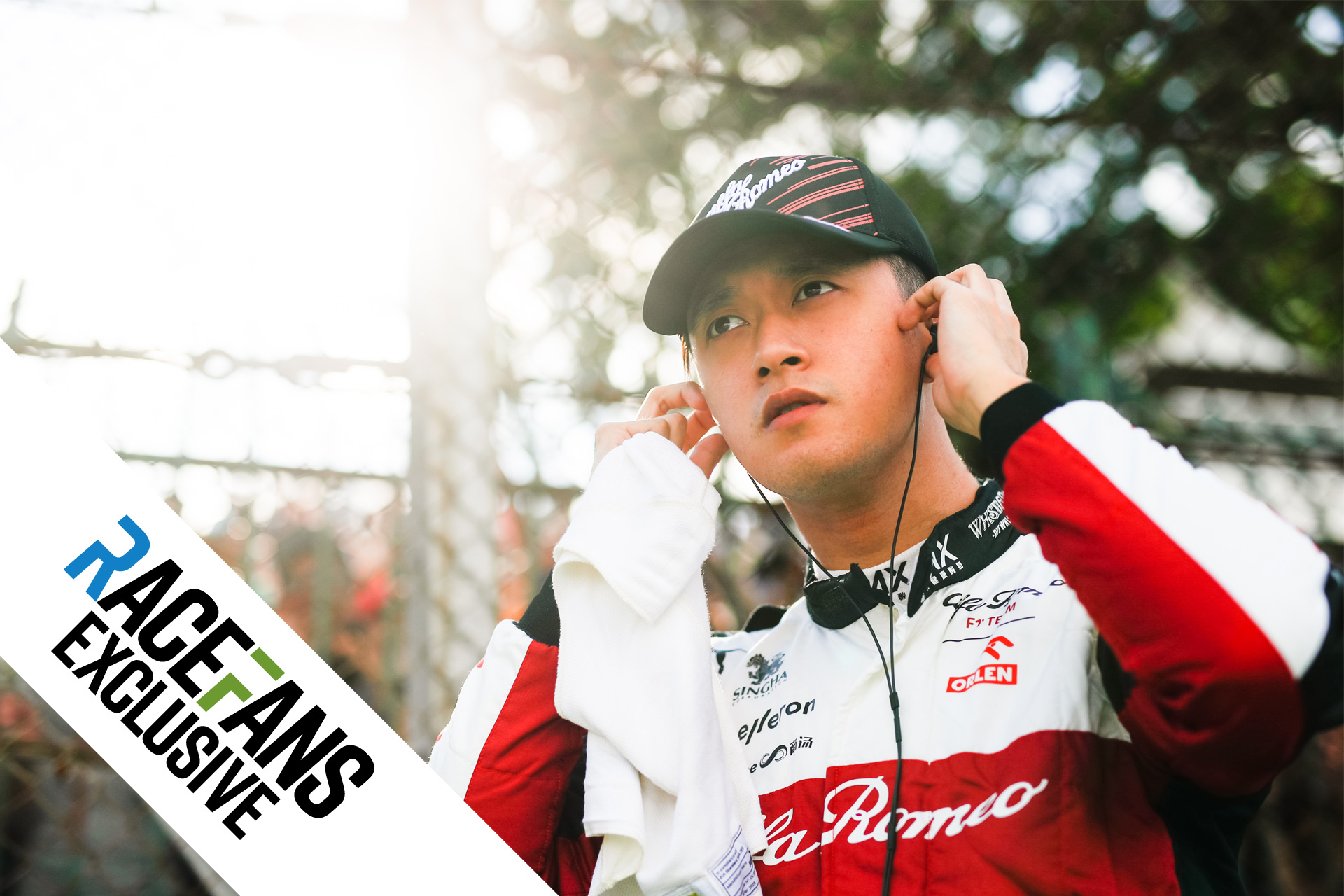 When 2021 Formula 2 racer Zhou Guanyu was confirmed for the final spot on the 2022 F1 grid just over one year ago, reactions from RaceFans readers were mixed.

Some welcomed the driver that sat in second place in the F2 standings would be promoted into Formula 1. Others were not so thrilled. “Fairly ordinary,” came one assessment. “I can’t say I’m too excited by this news,” expressed another.

But anyone who expected China’s first ever F1 racer would be one-and-done in the world championship was proved wrong when Sauber confirmed in late September that the 23-year-old would remain with the team during their final season as Alfa Romeo in 2023.

With his future in Formula 1 secured for at least another 12 months, it’s no wonder he’s so relaxed as he sits down with RaceFans for an exclusive interview just days away from the end of his rookie season in Formula 1.

Even reaching F1 is an achievement millions of young people dream about but only a handful ever achieve. So how does it actually feel to wake up every morning and think to yourself ‘I am a Formula 1 driver’?

“The reality is actually more or less very similar to what I expected,” Zhou replies casually.

“Firstly, when you knew that this year you’d be a Formula 1 driver, that’s something kind of a dream come true – you can’t believe it. It takes a couple of weeks, even one or two months to digest that. But then once everything becomes real, the first few grands prix, still that doesn’t feel real.

“When you are sat there with all the other 19 drivers to be part of it – it’s a really amazing and honoured moment,” he continues.

“When I was a kid, I was watching, hoping that I would be standing there one day. And then the moment when things start working and you try to push through all this new involvement, new team and this new whole chapter – it definitely has some, let’s say, tough moments. Hard moments. But you really have to push through it.”

Zhou’s 2022 has been the most intensive season of racing he’s had since first stepping up to single seaters in German and Italian F4 back in 2015. He readily admits how intensive the life of a Formula 1 driver is, but insists it’s of no surprise to him.

“I definitely expected that,” he says. “From Formula 2, you spend half a year doing not much at home and then now you’re travelling every day, 22 races, going to the factory in and out. So your life is kind of non-stop, always going to the next destination. It’s also quite fun, because you’re doing what you love.”

“You can really see the amount of people supporting you has increased massively compared to the past years,” he says, again discussing his personal experiences in the second-person.

“It feels like you could be winning as many races you want in F2, but the moment, the first day [you] become an F1 driver, it’s a completely another world. So that kind of thing gets to you, but it’s good. It means that all this hard work you put into it, you get these fans to greet you. So that’s great to have that. So overall it’s been an amazing journey so far. I’m really enjoying my time.”

Zhou was 2022’s only rookie driver – one Nyck de Vries cameo aside. But while recent rookies have struggled to keep their cars out of the wars at times – Nicholas Latifi, Yuki Tsunoda, Mick Schumacher and Nikita Mazepin – Zhou stood out for his ability to stay relatively out of trouble.

It’s telling that his biggest drama of the season – that horror crash at the start line at Silverstone – came when he was an innocent party. So how difficult has it been for him to keep his car on track during his first year in the sport?

“It’s actually quite tricky with the Formula 1 car,” he admits. “That’s something that definitely surprised me.

“Obviously when you’re in a race weekend little changes – the wind, track conditions – it means so much. Also the temperature – a few degrees can really affect your lap. So it’s very sensitive and not maybe like other categories.

“I knew at the beginning of the year the key was to try to stay on track, doing as many laps as possible and build up my confidence, my reference and my speed. I was maybe a little bit on the cautious side, especially in FP1, just making sure I get the laps in. And then from Saturday, it’s really when you have to be in a different zone in the morning session to be ready for qualifying. So that’s kind of the routine I’ve been following the whole season.

“It seems to be working, especially in the first half of the season, when you don’t really know too much about the car. That kind of works, because with one crash, one spin, it can kind of just back up your confidence – you won’t be carrying as much speed at the same corner you just crashed out at. So that was something I really kept in mind.”

For a rookie, it’s hard to think of a better team to begin an F1 career in than this one. Charles Leclerc and Sergio Perez made their starts at Sauber – which runs the Alfa Romeo-branded squad – as did champions Kimi Raikkonen and Sebastian Vettel.

Zhou’s relationship with former Mercedes driver Valtteri Bottas was one of the most wholesome stories of the 2022 season. Their teamwork was perhaps best demonstrated in the Interlagos sprint race, where Bottas ran behind Zhou and told his team advice to pass onto his team mate for how to overtake Nicholas Latifi’s Williams, who they were both tailing.

But the pair’s predecessors – Raikkonen and Antonio Giovinazzi – were also close friends when they departed the team after three seasons alongside each other. Is there something about the Sauber organisation that leads to harmony between drivers while other team mates turn into enemies, or is it more that Zhou and Bottas just happen to be team players?

Zhou considers for a second. “I think it’s a little bit of both,” he answers.

“I think the biggest thing is the way each driver behaves. Especially with me coming in as a rookie with Valtteri being an experienced team-mate. He really is quite open for the team and willing to help me. So on that side, I’m very grateful have him alongside me.

“Also for me, of course it’s difficult to catch up straight away. But with his data I really can learn a lot and also he’s given me a lot of advice which has been super important and useful. When the drivers are getting along, of course the team has created an amazing atmosphere to be working with both drivers in the different stages of their career. So I don’t know how others in the past at Sauber have been, but I’m really enjoying my time here. And with Valtteri and me together, it’s been amazing.”

Despite their strong rapport off the track, Zhou’s lack of points relative to team mate Valtteri Bottas over the first half of the year was hard to ignore. By the time they arrived in Canada, Bottas had amassed 40 points. Zhou – just the one.

But after Zhou added four more points with an eighth-place finish in Montreal, both he and Bottas scored only three more times between them for the rest of the season. It led to a very tense end to the season, with Alfa Romeo only just holding onto sixth place in the constructors’ championship from Aston Martin on countback. If Daniel Ricciardo had not kept Vettel behind him in the final laps of Abu Dhabi, Alfa Romeo would have missed out on millions of dollars in prize money.

With his team starting the season so strongly and then fading away over the course of the year, is Zhou worried about the team’s momentum heading into 2023?

“There’s no doubt for next year,” he insists. “We were already working on next year’s car quite early a few months ago. I think all the other teams do the same.

“But then we kind of didn’t really bring too many upgrades since the summer, just thinking we should be okay. It was great to have the one we had in Austin, it really seemed to be working.

“At least all the upgrades we’ve brought this season worked in the right way, in the right direction. So there’s no negatives. It’s just we didn’t spend as much budget this summer as other teams. So overall the direction is clear, so hopefully we have a good car for the start.”

While Zhou has input on the 2023 car, he has far more influence over his own performance as a driver. The goal of any second season driver in Formula 1 is to show marked improvement over year one. And Zhou is convinced he will head to Bahrain next March as a better driver.

“I feel like now, for example, especially one-lap pace, I have made a good step up compared to the first eight races,” Zhou says. “The first eight races, it was quite clear I was a bit off Valtteri for one-lap pace – now we are catching up and had some good times and been very close together. So that’s really good for motivating the team.

“Then, on the other hand, I feel like everything has improved because experience is a huge topic here. You just really feel comfortable out there, understanding the car. All the switches, the emergency times you have to react to. Staying calm.

At the age of 23, Zhou knows the only thing that stands between him and a lengthy career at motorsport’s highest level is himself. But simply competing in Formula 1 should never be enough – only becoming the very best can be the aim.

With that said, does Zhou Guanyu believe that he has the potential to become a Formula 1 world champion?

“Yes, for sure,” he states without a moment’s hesitation.

“That’s what we are here for. We’ve all been winning other junior category titles and championships and, if not, being title contenders in F2. We all beg for victories, for podiums and all these things, but for sure that definitely is my next big dream.”

12 comments on “Exclusive: Zhou on closing the gap to Bottas and coming back stronger in 2023”